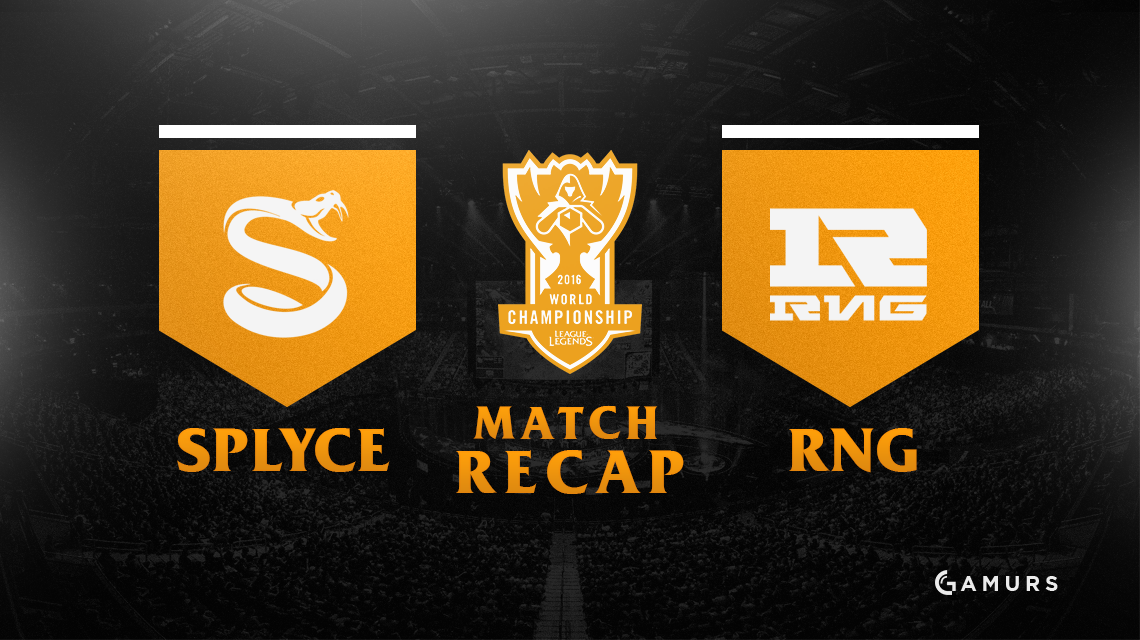 A recap of the Group Stage match between Splyce (EU LCS) and Royal Never Give Up (LPL.)

Throughout the early game, both teams came very close to finding first blood in both the bottom and top lane. Twelve minutes into the game, first blood was drawn by RNG but traded back by Splyce to preserve their very small gold lead and keep the game very close. Splyce soon kicked down the RNG door in the top lane, collapsing onto the RNG toplaner, taking the turret and then picking off the enemy Olaf. While at the same time, the Splye bottom lane made a play and killed both the RNG AD Carry and Support, putting them firmly in the lead with a 3k gold lead.

Twenty minutes into the game and no dragons had been taken, but Splyce had already dropped three turrets while RNG was still looking for their first. Also, thanks to some nice team play, they were able to find a pick onto RNG which extended the kill lead to 7-2. A top-lane tier two turret followed up the kill and brought the gold lead to 6k for Splyce. Twenty-three minutes in, Splyce took the first dragon of the game and extended their gold lead just that much more. Splyce attempted to start Baron, but decided against it and played it safe. Splyce then killed two members of RNG and took the Baron when it was much safer to do so.

Splyce continued their control of objectives by taking their second dragon, a mountain, and then pushing down the mid-lane, taking down the final standing RNG tier two turret. At 34 minutes in, Splyce attempted a two man Baron that was spoiled by RNG who rotated over from the mid-lane. A fight ensued that saw both teams lose one member, though both teams were still looking for the Baron. Splyce and RNG faced off in mid and yet again the fight went in the favor of Splyce, who would push down the mid-lane for the final time and take down RNG’s Nexus for their first win of Worlds.

Coming into day seven of Worlds 2016, Splyce was the only team without a win, and they sat in a group with three teams all tied at 2-1. They were all but eliminated from the tournament and would play their three matches just looking to prove that they had potential to fight against teams on the world stage. The analysts said that Splyce would be “playing spoiler…” today, and that is just what they did. Splyce came into this game against Royal Never Give Up with absolutely nothing to lose and everything to gain. The early game was even, but Splyce soon took a risk that worked out and began to snowball the game.

As Crumbz said on the analyst desk, Royal Never Give Up turned into Results Not Guaranteed as RNG seemed to be their own worst enemy after getting caught in spots they should not have been in, and Splyce capitalized on each of these missteps.

This win from Splyce has blown open this group and bought Team SoloMid (who had just lost their first game) some breathing room in the group.

Splyce was a team who performed outstandingly well in the second half of the European League Championship Series and in the EU LCS playoffs. Though, despite that, people in the community were still unsure of what to think about the Danish and rookie filled squad that has some players playing in their first ever split. Splyce looked like rookies in week one, making quite a few mistakes, and their 0-3 record reflected that.

Splyce will play Team SoloMid and Samsung Galaxy to close out their Worlds 2016 showing. They can go home happy knowing that they did find a win, and it was not against a free team. In fact, they still have a chance to advance.