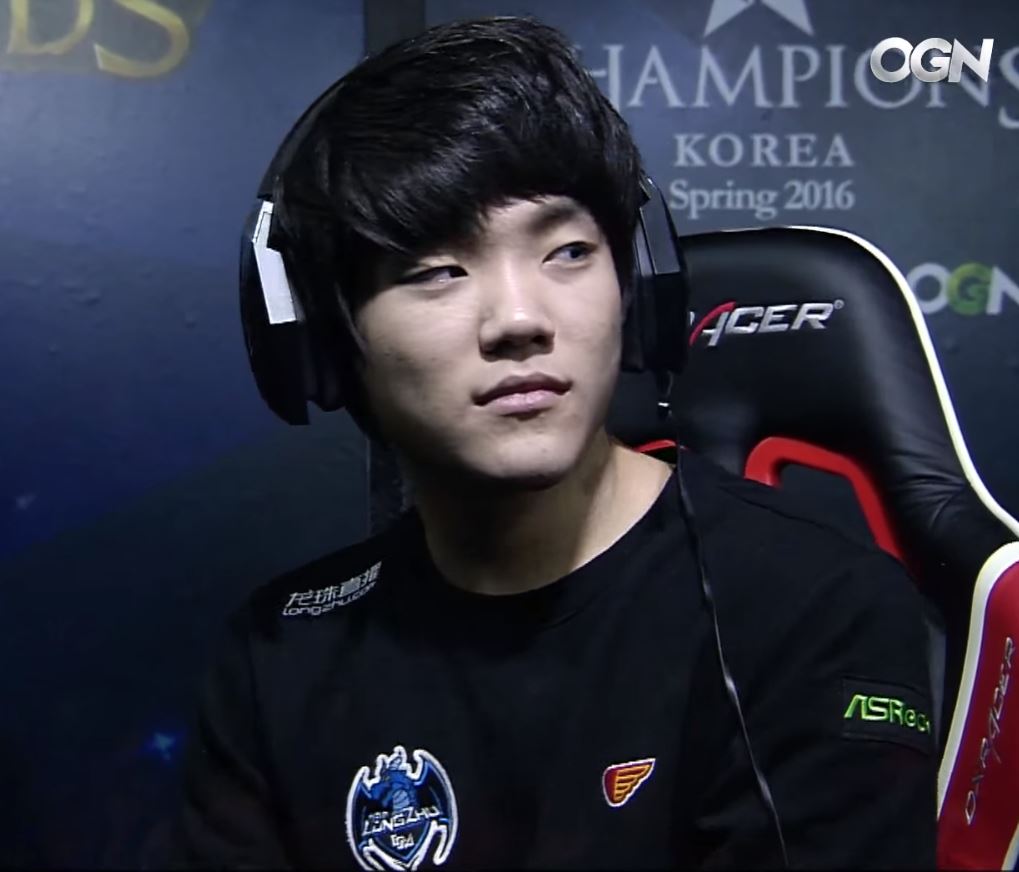 Through a hail of spears and buckshot, Lee “Crash” Dong-woo has made a splash in the LCK’s 2016 Spring season. Longzhu’s greener jungler recently began starting over Lee “Chaser” Sang-hyun – arguably the league’s best jungler last year and by no means a weak link in the team. Crash’s starter status comes after Longzhu saw mixed results with individually skilled players but apparently poor team and macro-play; the team has been switching up their roster in a presumed attempt to uncover natural synergy.

Instead, the spectacle has been Crash’s ability to take over games with a degree of autonomy and graceful decision-making startling in a player – jungler especially – with meager competitive experience. Before Longzhu acquired Crash, he played for most of 2015 in the amateur-level scene in China with the name Goeat. In that time, he played on a number of generally unsuccessful teams to which Longzhu should be considered a step-up.

Crash is not a daring duelist jungler a la Yoon “Peanut” Wang-ho. That is not to say Crash is not brave, but the latter’s invasions seem intended to 1v1 and outplay the enemy jungle. Crash seeks to outfarm. And he usually does, even passing the Flame horizon against CJ Entus’ Park “Bubbling” Jun-hyeong in game 3 of their series on Week 4 Day 1… despite losing the game. Crash will often come into the late-game with an absurd CS differential, CS leads over enemy top-laners and/or levels above everyone else in the game. This is all accomplished by choking the enemy jungler out and extending the consequent lead into a team advantage, in an interesting counterpoint to the way teammate Chaser tends to strangle out one lane.

The sense one has watching Crash is of a player constantly asking “Should I bully him off that camp, or go steal from the other half of his jungle?” Regardless of which he chooses, Crash’s decisions and his current success are facilitated by important aspects of the meta and his playstyle.

Anyone who watches the LCK recently knows that the side-lane tier 1 turrets fall quickly and most games then feature an extended shuffle as teams jockey in mid lane for the coveted outer-turret advantage. Soon enough death timers are so long that one or two big teamfights decide who takes the first significant lead in the game. Dragon? Rift Herald? Someone might happen to make a move for an early neutral objective, but it is almost never contested or truly impactful.

So when a jungler is not aiding in smacking over the preliminary turrets, most of them are farming. There is no need to group and skirmish early, no need to pressure lanes significantly, just a need to get those sweet farm leads and scale up Strength of the Ages. And Crash loves to farm quickly. He will clear most of his jungle, clear the parts of yours he knows you are not at, and then bully you off of camps and take them as well.

The look of a man about to bully his way to an MVP performance. (LCK Screengrab)

Crash’s picks enable this – there is no coincidence that his debut game was on Graves. He does not really wish to kill you, which is why he has 0 games on Elise. He would likely have 0 Kindred games if it was not banned, too. Instead he plays Graves, Nidalee and with those removed, Rek’sai to clear as fast as possible within the meta. A high-level, farmed jungler with a stacked Strength of the Ages is a stat-monster, and Crash consistently manages that point. Alongside a team of skilled and self-sufficient laners, he is consequently in the perfect situation for his playstyle. For now.

In examining the falls of professional LoL players, one factor rears its head all-too-frequently: the ever-shifting meta. The ability of players like Faker to retain not only a niche, but star-level status over the course of seasons is what makes them truly impressive. A degree of adaptation is key also for a player hoping not even to be a star, but simply to remain playing at all. Korea is famous for turning talent over readily, and great players have surely been lost rapidly after only briefly appearing in an unsuitable meta.

A major change will probably occur before Longzhu has hopes of a title. PBE changes abound to emphasize early-game objectives even now, and a major shift may occur before Spring finals. It may be that we are witnessing Crash’s inherent playstyle and his suitability to the meta is a lucky coincidence. Or he may have reached this point by a currently-obscured capability to adapt.

In the short-term, it is clear that Crash is a considerable strength of Longzhu and that crushing him may be a viable plan for enemy teams to explore. Instead of purely farming and taking sidelane turrets, opposition may see success gunning specifically for Crash. While his bullying of the enemy jungler is intelligent, it would be rendered ineffectual if his opponent had some backup. Strong global pressure picks have recently fallen-off due to the bunched-up nature of the “mid tier 1 tower tussle” and the reliance on poking, scaling compositions (or hard-engage to counter them), but global pressure may be a legitimate tactic to unsettle Crash.

To some extent, arguing for global pressure to keep down a 1v1-oriented player is a bit unfair. Longzhu has no shortage of threats on the rest of the map, and it’s easy to see that keeping one person down with superior numbers is a too-obvious theory against any player currently carrying games. The difference is that Crash is still a rookie that has only really shown one style. If one keeps a Shen or a Twisted Fate in one’s back pocket, does he still try to take that Gromp under one’s nose? Does he make a severe misstep? Watching the Rox Tigers in particular execute such a strategy would be extremely interesting, given their recent tendency for quick games centered on the playstyle of skilled and bloodthirsty fresh jungle talent Peanut.

To prove he is truly a great prospect, Crash will need to adapt at some point. His thus-far nuanced decision-making is a sign that he may be the real deal. But if enemy teams probe for a chink in his armor or when the meta changes, will he crash and burn or will he still be Korea’s most promising rookie?