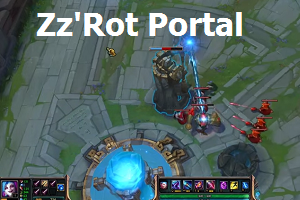 Towards the beginning of January, an item called Zz’rot’s Portal was added to League of Legends. For those who don’t know, the item provides Armor, MR and HP Regen, along with an active that places a portal of exploding minions in a lane. These minions automatically target the nearest turret and push the waves for you. If you’ve heard most analysts talk about the Zz’rot’s Portal, you’ve probably heard them discuss how the item is a split pusher’s dream. After about a month of playing with the item, I think that in order to understand optimal use of the item, we need to redefine how we think about split pushing, and we need to look at Zz’rot’s not as an offensive item, but a security system for a team’s wave management. In this article we’ll discuss the cost efficiency of the item, champions that can use the item optimally, and how I think the item can be most optimally used.

For those of you who aren’t aware, you can determine the cost efficiency of an item by breaking down the cost of each stat individually based on the item with the lowest cost for that item specifically. An example that we’re going to use is the Null Magic Mantle for figuring out the cost of MR. Null-Magic Mantle is a 500 gold item that provides 25 MR. After dividing the cost by the amount of MR, we learn that 1 point of magic resistance is worth 20 gold. Zz’rot’s portal provides 50 MR, so we know that the MR alone costs about 1,000 gold. After doing the math for the other stats, the Armor costs about 1,000 gold, and the base HP regen costs about 360 gold. The Portal itself costs about 2,800 gold, and the stats cost around 2,360, so we can assume that the active costs around 440. For what it provides, Zz’rot’s Portal is an extremely cost efficient item for the stats and active that it provides.

That being said, I believe that Zz’rot’s Portal has better use as a crutch for controlling waves than as a split pushing tool in this meta. Currently, split pushing is reserved for certain mid lane carries (namely Zed) and specific top lane champions such as Dr. Mundo. That being said, split pushing is usually not the best strategy due to the heavy emphasis on team fighting and neutral objective control. But it is for that same reason that I argue that Zz’rot’s Portal is one of the most broken items in the game. In my opinion, it should be used immediately before teleporting into a team fight. By placing the portal down, a top laner can guarantee that his lane will push in his favor unless the other top laner decides not to teleport into the fight, which essentially gives you a guaranteed team fight win and probably a free dragon/baron. If the other top laner does teleport into the fight, you have a wave going in your favor no matter what, so if the fight is extended your opponent has to make a difficult decision between dragon/baron or their structures. I think the item is fantastic specifically for the pressure that it puts on the other team, even if it never gets a turret. That being said, I want to look at the champions that I believe can use the item most efficiently.

Just to clarify, I’m only going to discuss meta champions in competitive play at the time that this article is being written. While champions such as Shen and Zac can make fantastic use of the item, I don’t feel that they are relevant to the current discussion. That being said, I feel that Dr. Mundo, Maokai and Gnar can all make fantastic use of the Portal at different points in their build paths. First of all, Zz’rot’s should never be the first item that you build. Generally you want to build an offensive item or one that allows your champion to use their kit more efficiently. Specific examples would be Hexdrinker vs AP on Gnar, Spirit Visage on Dr. Mundo, and Rod of Ages on Maokai. To use Zz’rot’s as optimally as possible, it should be built second. This makes the early dragon fights more risky for the other player because the Portal will constantly push your wave. When the distance between the turrets is that short, it almost guarantees that you get a free turret even if you lose the dragon. The later you get the item, the less pressure it puts on the other team because the waves will take longer to push to the turret.

All in all, I think that Zz’rot’s Portal is an extremely powerful item and one that is often shrugged off as something that only split pushing champions can use. Only time will tell if the item is ever used to it’s full potential, but I believe that it can make be used to force your enemy to make the wrong decision if used properly.