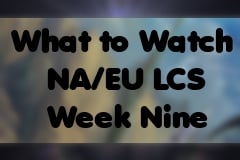 This is it!  The last week of the Spring Split is here and playoff seeding is on the line.  On both sides of the Atlantic there is still a lot up for grabs.  TSM and SK look to be the favorites to take the number one seeds in their respective regions, but the other playoff Byes are still an unknown.  On the lower end we have teams of incredible pedigree such as Elements and Team Liquid scraping to even find a place in the playoffs at all!

Last week I went 6/10 for EU and 8/10 in NA, it will be interesting to see if my thoughts manage to outdo the wisdom of the crowd by the end of the split.  (Really TSM?  All AD?)

Game to Watch:  Going into the week, both teams face potentially difficult day twos, and with a tied record, H2K and Fnatic both really want this win to grab the second place Bye.  The Kasing era H2K is not the same team Fnatic beat week one, but they don’t seem to have adjusted to the new patch as quickly as Fnatic.

Game to Watch:  Which game is the critical one day two will really hinge on the day one results.  Any upsets and the implications change dramatically.  Unicorns and H2K should be a great match to watch, but Elements will have a lot on the line so their match against Fnatic to end the split will be a nail biter for fans.

Game to Watch:  Gravity beat Cloud 9 last time they played.  Gravity beat TSM last week.  Can they keep it up?  When C9 are comfortable they look flawless, but they have repeatedly been taken out of their comfort zone this split, to the surprise of everyone.  On the other side Gravity has been a real over performer, pulling out some entertaining picks and really stepping out of the shadow of their former ‘main’ squad when they were Curse Academy.

Game to Watch:  Oh man what a stacked day!  Team 8 and Gravity are both on hot streaks, and could easily go into the day tied in the standings.  Gravity took game one but both teams really want the win to stay ahead of Liquid and secure a playoff spot.  Team SoloMid and Cloud 9 always have epic games, hard not to recommend this one, but if I had to just pick one, CLG battling Team Impulse is what I’d watch.  CLG manhandled Impulse week two, but Impulse have looked better and better as the split has progressed.

Hopefully you’ve found this series to be helpful in framing the upcoming weeks, stay tuned for the playoffs!