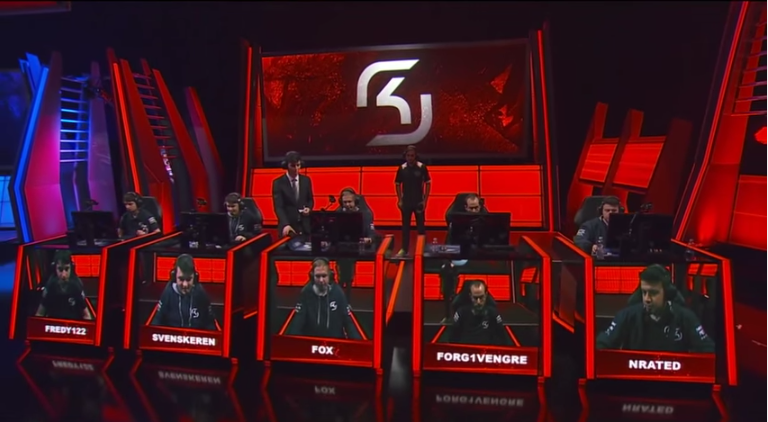 The past week was marked by the performance of SK Gaming. They have shown that in the off-season they have improved their weakest positions with acquiring Forgiven and Fox but still retained their shotcalling and strategy from the previous season. As both of the new acquisitions proved to be top of the pile at their positions especially the AD carry Forgiven with his recent spectacular performances.

Will the better teams win this week or will we see some upsets? Is this really the EU LCS like previous seasons where everyone can beat everyone? We are going to see interesting matches this week. 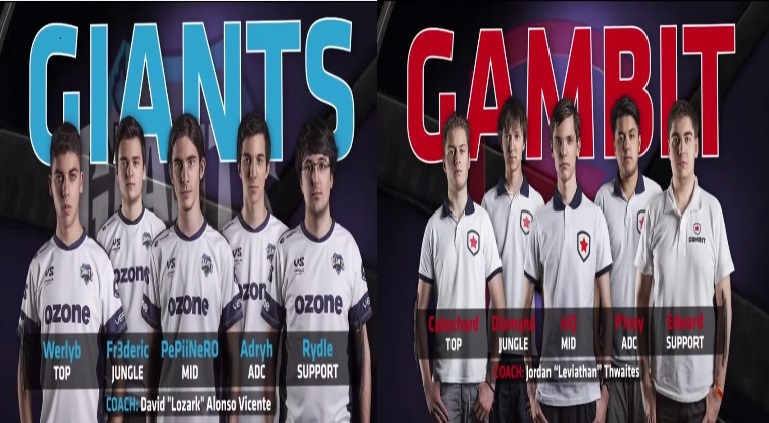 Both teams had a pretty bad week with Gambit snagging up their first win, so they are kind of the team with the momentum. Giants haven’t found success against the top teams because their solo laners get outclassed in the laning phase, not to mention their decision making is not on par. The only wins they had were the ones where Werlyb was on a splitpusher and managed to carry his team to victory. Gambit on the other hand have already won their first game but they won it because H2K got caught a couple of times which made them snowball the game. Their vision control was lackluster but versus Giants that won’t be detrimental. niQ has been largely underperforming these past 3 weeks and the team in general has been pretty lackluster. Both Giants and Gambit didn’t have a lot of practice these first weeks cause of issues with their gaming houses, but Gambit allegedly have got their gaming house and internet up and had practice.

If Gambit can play to their strengths and had more practice this week they might be able to pull off a win. The deciding factor for this game will be the junglers and midlaners and how they will matchup. Diamond has been playing better and should outclass Fr3deric, while niQ should go atleast even. Both teams are aggressive and love to teamfight. We are probably in for a lot of kills with lack of vision and the usual throws at Baron/Drake. 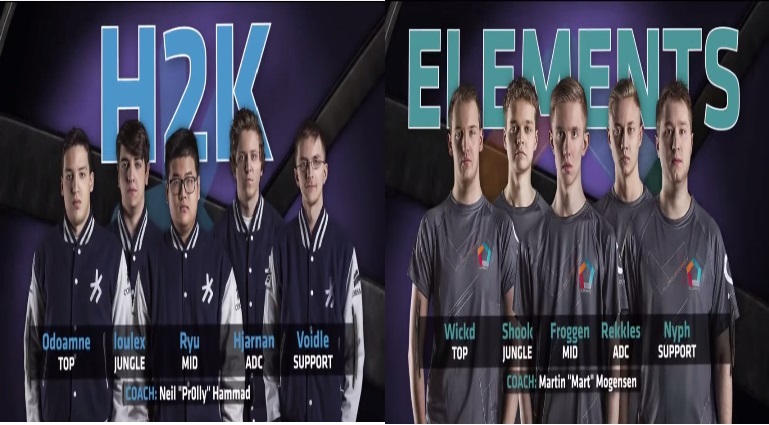 H2K lost both of their games last week but the one vs Gambit was mainly their fault. They had the better vision control yet they got caught out time and time again against a pick comp which gave Gambit a lot of objectives. This week Voidle isn’t gonna be playing, in his place it’s going to be kaSing the former support of MyM and Gamers2. Voidle was the one who got caught a lot in their last game so maybe the new acquisition will help them improve, but only time will tell. Elements won a relatively fast and easy game versus MyM a team on the downfall, while versus SK Gaming they were in the lead and had the map control right until they bit of more than they could chew and ended up getting punished by SK and the whole game being swung in SK’s favor. Wickd and Shook need to step up because they haven’t been playing at their usual level. On the other side l0ulex needs to get his team going more in the early game, while we see how kaSing fares with Hjarnan.

Elements have got good solo laners with Wickd being the one that can potentially lose to Odoamne, Shook should learn from his mistakes and not play so aggressive when there is no need to and he should outperform loulex in the early game. While the botlane of Elements I believe severely outclasses the one of H2K. H2K can potentially win if they somehow get Odoamne ahead of Wickd in a lane swap like C9 does with their toplaner. Having said all of this, vision control, map movements, shotcalling, teamfighting and decision making is all on the side of Elements. This is their game to lose. 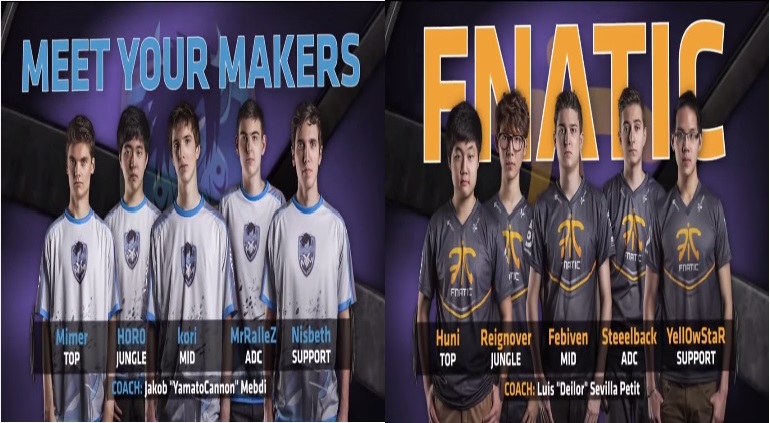 MyM had no chance in both of their games this past week with Horo being the shining light on this team. But with all the drama surrounding them lately I doubt that they have been practicing a lot or at all. With Kori recently coming back, their synergy being in shambles and having not been paid wages I believe this team needs a lot of time to bounce back. They can start by improving their individual performances as their solo laners have been lackluster but also their ad carry mrRallez hasn’t been playing as usual. MrRallez was one of the best ad carries in Europe last season but the first weeks he has been a shadow of his former self. Fnatic on the other hand suffered their first loss versus the Unicorns of Love but quickly bounced back with a win versus the Giants. With UoL beating them by pulling off Nidalee Jungle and Fizz Top. Fnatic were in the lead for almost all of the game until come late game where the teamfighting of UoL was simply better. Fnatic have been successful on pick comps and dive comps with Yellowstar’s roaming and Reignover’s jungle play carrying the early game. After that they go for deep vision to make the necessary picks and decisions. Which leads to them snowballing games.

I think if Fnatic stay to their style as they have done thus far they should be able to just roll over this weakened MyM side who has no glimpses of improvement. Yellowstar’s roaming and Reignover’s jungling should prove key to this matchup. The solo laners should go even in lane, while the only chance MyM have of wining this is if somehow Horo can tilt both of their solo lanes in their favor and then get the deep vision control and objectives in order to snowball. But Fnatic having one of the best supports of the west in terms of vision and playmaking I think it’s a hard task ahead of MyM. Febiven ahd Huni have also proven to be pretty solid and one of them might end up carrying the game. 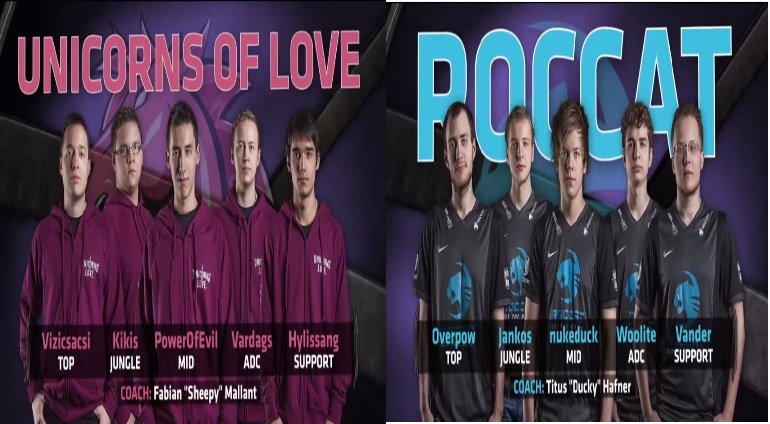 UoL started the week greatly by beating Fnatic with their somewhat new and unusual composition. The Unicorns have been looking good these weeks showing that IEM San Jose wasn’t just luck and other teams underperforming. They have proved they are a good team that can take games off of top teams but also get too cocky when they play with weaker teams. They lost to the Copenhagen Wolves one of the worst teams in the league giving them their comfort and power picks and also the “Gnarvan” combo. They were in the lead most of the game but Freeze and Soren were on form with their comfort picks and managed to squeak a surprising win. Roccat has been far from great having a tough schedule but their schedule last week was easy and they picked up two relatively easy games with Jankos playing Nidalee in the jungle, changing from the Elise which he had no success on and almost no early game pressure. Everyone stepped up from Roccat last week, was it only cause of them playing worse teams or just them getting better this game will show us.

On paper Roccat seems the better team but their recent performances haven’t been really overwhelming. They have been improving since the first week and seem to be a team on the rise. If they can play more aggressively early game, stop losing the early game and maintain good vision control getting in the deep ward coverage they lacked in previous games they can cruise to a win. While on the other side UoL needs to play their game but without giving so much power picks or comfort picks to the opposing team. Both teams like to teamfight and have good decision making I think the junglers will decide this game. How much can they both do to tilt the scales in their advantage. If the game goes late but in even surroundings I have to give it to UoL, Roccat has lost almost every game they went late even with a late game comp, but I believe they have what it takes to not let it get to late. 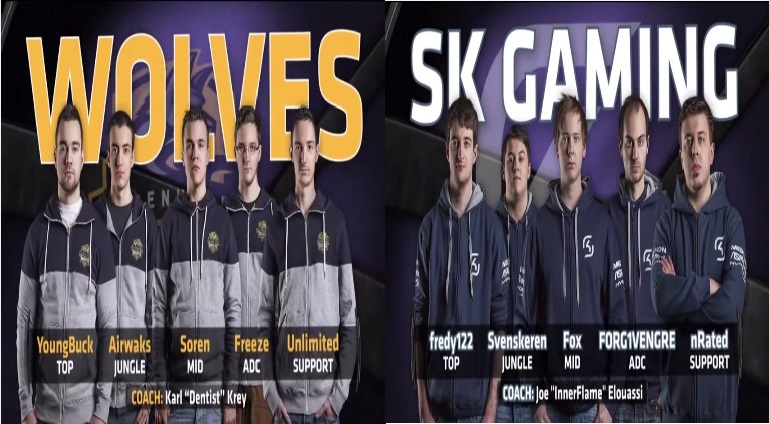 Very surprisingly the Wolves won both of their games last week and have a 3-3 record. They like to play the long haul games as they did versus Gambit and when they got to the lategame and they showed their ability to win. The game versus the Unicorns of Love was the game where they got the best picks they could have hoped for and on the shoulders of Soren and Freeze cruised to a victory. Freeze showed us that he is still a good ad carry with his performances and that the Wolves have something about their ad-carries that turn out to be one of the best in Europe. SK on the other hand remain without defeat in the LCS and I don’t see that streak stopping soon or here at least. But their game vs Elements was pretty close to being their first loss if it wasn’t for Elements making key mistakes in the mid game. Fox showed that he is good but still not on par with the likes of Froggen but certainly a lot better than their last midlaner. This game he gets an easier matchup versus Soren who only shows up big on his comfort picks while Forgiven gets to play against his old team for some sweet revenge. Freeze isn’t a slouch but I do expect Forgiven to show his class again this match.

SK Gaming need to keep doing what they have done so far controlling the map, making smart decisions and rotations. While their vision is not the greatest they have still made the correct calls almost every time. Almost all of the lanes are in SK’s favor especially the top lane where freddy122 should totally outclass the likes of YoungBuck. Not to mention the synergy of Sven and Freddy being on a really high level compared to their opposite number. Svenskeren the MVP of last week is one of the best junglers in Europe if not the best so he should get his team ahead and lead them to another easy victory. The only thing the Copenhagen Wolves can do is hope is to get powerful and comfort picks and somehow win a teamfight in the late game other than that I expect a pretty fast and clean victory from SK Gaming.