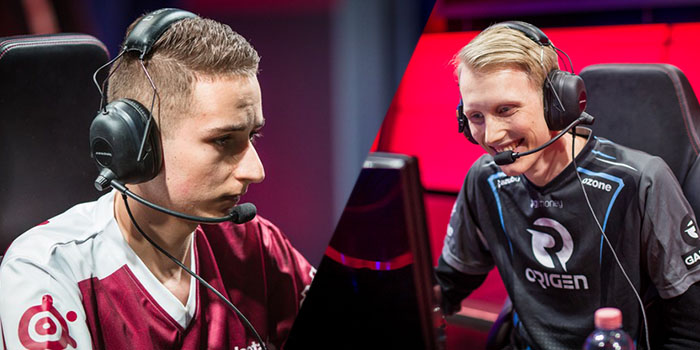 On Sunday the second quarterfinal match will take place between the 5th seeded team Unicorns of Love and the 4th seeded team Origen. This is a surprising turn of events that led both these teams to fight each other with these seeds, since most of the analysts, myself included, expected Origen to finish at least top 2 in the regular season thanks to their acquisition of Tristan “PowerOfEvil” Schrage. But he will not be the player I’ll be talking about, for the really interesting match-up of this series is between the two AD carries.

Pierre “Steeelback” Medjaldi and Jesper “Zven” Svenningsen both played for several challenger teams before their debut in the LCS. The first known organization to pick up both these players was SK Gaming Prime. First, in 2014 Zven played several small tournaments with them, including the Challenger Spring Series #1 tournament, which he lost in the quarterfinals. Later in that year after the team disbanded several times, Steeelback joined them and eventually failed to qualify for the LCS at the 2015 Spring Expansion tournament.

Then, they both got recruited by two legendary names of the European scene. Steeelback joined the restructured Fnatic squad alongside veteran support Bora “Yellowstar” Kim, and Zven joined Enrique “xPeke” Cedeño Martínez in the newly formed challenger team Origen. Both these teams won their respective tournament: Fnatic won the EU LCS Spring split, and Origen won the Challenger series, therefore automatically qualifying for the EU LCS Summer split. At that time Steeelback was considered an average-level “clean-up” AD carry, while Zven wasn’t his team’s main threat either.

Before the Summer split, and despite a great team performance at the Mid-season International, taking SKT T1 to 5 games, Steeelback got replaced by Fnatic’s former AD carry Martin “Rekkles” Larsson and went on to play in the NA Challenger series with Team Imagine. He eventually lost to Renegades in the semi-finals. During the off-season he went back to the EU LCS, as the Unicorns of Love’s starting AD carry. In the meantime, Zven developed as one of Europe’s best marksman, taking his team to a close loss in the Summer split playoffs finals against Fnatic and an impressive top 4 finish at the season 5 World championships.

While neither UOL nor Origen managed to secure a top 3 finish at the Spring split regular season, both these players have been key to their team’s success and have shown that they are among the best at their position in Europe. Let’s highlight that through some stats.

These stats are solely among EU LCS Spring split players that played more than 10 games.

While these two players do not have the best kill participation stats, it is fairly obvious that they are the most valuable players of their respective team looking at their gold share and damage per minute which are the two bests of the entire league. Whether they win or they lose, they surely are getting gold and outputting “disgusting” amounts of damage in fights.

The high gold share is a direct consequence of the heavy botlane centric playstyles both Origen and UOL have favored this split. On one hand, Steeelback plays with sololaners who, while they are above average, are not on-par with the bests of the league such as Lucas “Cabochard” Simon-Meslet or Luka “Perkz” Perkovi?. On the other hand, nearly every Origen members have been playing worse than last season except for Zven and his support Alfonso “mithy” Aguirre Rodriguez, who have been the ones carrying them in most of their wins. Therefore it is purely logical to play around both these AD carries who have been performing really well most of the time.

Steeelback has been steady in his teamfighting performances, and playing mostly conservatively during the laning phases to allow his support Zdravets “Hylissang” Iliev Galabov to play his roaming-heavy style, thus leading to a high KDA ratio and above average kill participation for the marksman. In contrast, Zven has had inconsistent results this split, mainly due to Origen’s drafts. While his laning phase is always one of Europe’s best thanks to his excellent synergy with mithy, he has been unable to reliably be a carry for his team in certain games in which he was playing champions who did not fit the team composition. These pick and ban issues, which can be mainly blamed on Origen’s lack of an effective coaching staff, led to him having some questionable games and a disappointing kill participation overall.

However, although these drafting errors have cost Origen many games, they have been enabled by Zven’s impressive flexibility and champion pool.

Steeelback’s (left side) and Zven’s (right side) champion picks during the 2016 Spring split regular season.

While the stats may show that both these players favored Lucian in most of their games, their most scary champion has definitely been Kalista. Indeed, these players have gotten her banned or firstpicked against them in 11 games each during the split, and for good reasons. While Steeelback is undefeated on her, with a 33 KDA ratio, Zven, who has played her only once, precisely in his first game against the Unicorns of Love, carried this game really hard with an 8/0/3 score.

What these champion picks also show is the difference in playstyle that these AD carries have. On one hand, Steeelback is favoring teamfight-oriented picks when he cannot get his hands on Lucian, such as Sivir or Ezreal. On the other hand, Zven has shown his ability to play a lot of different champions, but mainly picking for lane dominance, with Jhin or Miss fortune games. He has not however played Sivir, who is the best AD carry pick right now, especially since the matches will take place on patch 6.6 in which Kalista has been gutted. However, I still expect her to be a high-priority pick during the series, for these players have shown incredible proficiencies on it.

Overall, while Steeelback has really improved a lot this season and has shown that he is not the “average clean-up AD carry” that he was a year ago in Fnatic, I do not think that his skill-ceiling is as high as Zven’s. And this can be said for the whole Unicorns of Love roster compared to Origen’s. Yes, the Unicorns have been playing a solid macro-game oriented playstyle and have had great performances throughout the split, while Origen have been inconsistent and have not demonstrated a great understanding of the game. But I still think that Origen have highest highs and more individual skill man for man. This is precisely what allowed them to beat the Unicorns of Love both times they met during the split. For a team that managed to get a top 4 finish at Worlds last year, not advancing to the semifinals of the EU LCS spring split playoffs would be a huge disappointment.

It’s going to be a close series though, and UOL could definitely create the upset like they did last year in Spring. But whoever wins these quarterfinals, I don’t see them going to the finals anyway, for they’d have to most likely face the number one seeded team Gamers2 in the semifinals.

I’ll be writing about the semifinals matchups next week. Stay tuned for another ‘Watch out!’