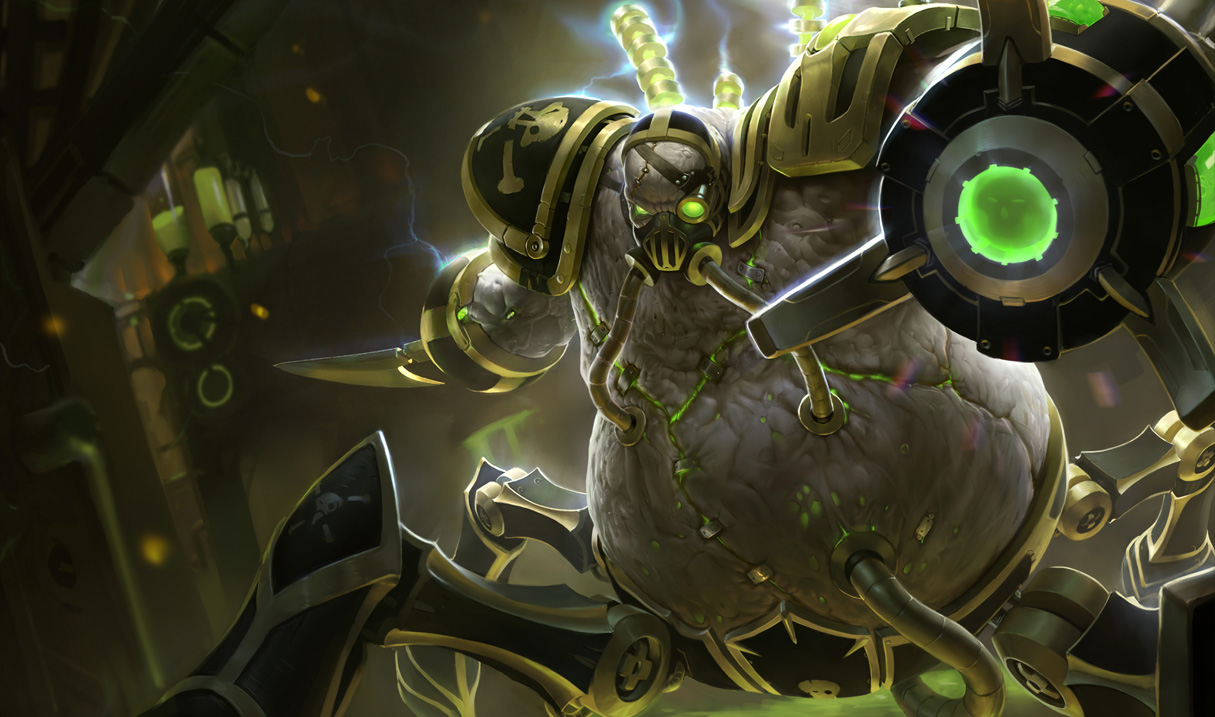 Let’s just make this clear: the fact that Thunderlord’s Decree was (and still is) basically all over the place did never mean you had to take it on every champion there is, and along with Brand, I think Urgot is probably the last candidate on which people should have been doing so.

While Thunderlord’s is a formidable mastery and Precision is too, there is one thing people seem to have overlooked – if you can reliably and persistently proc an additional 50% AD/20% AP ratio (now 60%/25%), from long range, along with armor shred, on top of your already strong scaling.. there is no reason to go for anything else, so let me just crunch you some numbers for a better understanding.

(This means it will only grant you 8.4 armor penetration at level 18 now, instead of the previous value of 14, which is quite a lot of difference. The two masteries will now break even at 120 enemy armor as opposed to 200.)

Now, Thunderlord’s offers some rather reliable scaling with levels as well as a decent AD ratio at 10*lvl + 30% bonus AD + 10% AP but while it is very easy to proc with just one E, or an auto-Q-auto exchange in lane, it comes at a 20 second cooldown and since Urgot is not a burst damage-based champion, this is not an optimal choice for him.

In comes Deathfire Touch, which might just be the most underrated mastery of 5.24 – let me just put it into numbers (listing the damage of each of Urgot’s offensive abilities, with the Deathfire Touch scaling added on at the end in brackets []):

That is quite a bit of extra scaling, I think we can all agree.

Again, let me just make this more tangible: aside from the usual stats, a Youmuu’s Ghostblade will make your Q deal an additional 39 magic damage, and your E will deal an additional 58.5 – I don’t think I have to tell you that that is a lot of additional value, considering this might be your first item.

Your rank 1 E will literally gain an additional 97.5 mixed damage through just a Ghostblade, making it from a semi-useless tagging tool into a very mana-efficient harassment ability, even if you can’t land any follow-up Qs – and that is without factoring in the armor penetration.

And consider that all of Deathfire Touch’s damage output is in magic damage, so you will be mixing your damage output on top of getting additional armor penetration and shredding the enemy armor with your E and Black Cleaver already, so it will be extremely hard to build up enough resistances to anywhere combat Urgot’s damage output with an item or two in the bag.

Now, this huge increase in later game scaling will definitely reward you for playing Urgot in a more glass cannon-y fashion, like a long-range artillery cannon with armor shred, damage output and reliable slowing ability (not to forget that his passive reduces all enemy damage output by 15%), as opposed to a mid-range tanky slowly and shredding annoyance to the enemy frontline.

I for one welcome this notion a lot since it enables him to fulfill a role he was never able to shine in before – being a high damage carry, and providing something valuable in the later stages of a game. Think of him more like Kog’maw, as opposed to the Urgot you know.

This will mean you don’t want to be the Urgot who flashes in, grabs a priority carry with his ultimate and has them killed, then trying his best to get out of the enemy frontline with his dear life as he builds in a semi-tanky fashion throughout the game.

Now your objective becomes to land a single E, along with two to three Qs, and then their health will vanish surprisingly quickly, from long range, while you stay within the safe confines of your own team’s frontline.

Now as for playstyle, item builds, runes and masteries:

I play Urgot as a top laner, since I feel the early game harassment in the bottom lane is pretty tough for an immobile champion, specifically with carries like Lucian, Miss Fortune and Ezreal being highly played right now, that is not where you want to take Urgot.

Usually you’ll want to start with a Corrupting Potion, since it gives you lane sustain in terms of both HP and Mana, as well as offer you additional DoT damage on both Q and E, which is a nice compensation for the lack of early power in Deathfire Touch – once the potion’s damage becomes irrelevant (around one to two items), your keystone will deal around 80+ bonus damage on its own for each of your Qs, so you’ll be fine from there.

With just two items, you will already have quite the scaling on Deathfire Touch.

Death’s Dance for the infinite sustain, 75 AD and cooldown reduction – DFT scaling equates to 45 magic damage on every Q.

Maw of Malmortius gives you more tankiness, sustain, armor penetration aswell as 55 AD, which will translate to 33 magic damage per Q upon purchase.

Youmuu’s Ghostblade makes for another boost in armor penetration, cooldown reduction, a very useful active for maneuverability and the occasional auto attacking and another 65 AD – 39 magic damage per Q.

Black Cleaver is just completely irreplacable on Urgot since it just offers such a strong variety of statistics; 300 health, 20% CDR, 30% armor shred (that’ll be 50% together with your E) as well as 55 AD to top it all off – 33 magic damage per Q.

All in all that will make for 320 bonus attack damage from items, equating to 192 magic damage per Q through Deathfire Touch just from items later in the game.

Other than that, you’ll get 30 armor penetration, 50 magic resistance, 300 health, 15% physical lifesteal/spellvamp, 30% armor shred, 40% cooldown reduction out of this build, so that is pretty sweet too overall.

12 armor penetration in reds, since it makes up for a large percentage of your opponent’s armor early and will help you through trades in lane, as well as scale well alongside your Black Cleaver and Ghostblade later (also, a rank 2 Q hurts).

9 armor in yellow is pretty standard, early resistances and room to scale up.

12 magic resist in blues for the same reason, and because your standard item build already gets you to 40% CDR.

6.8 AD in quints since armor penetration quints don’t hold up well in terms of gold value, and the bit of extra attack damage works well with your ratios and lasthitting, so why not.

Now masteries I find a bit more ambiguous in some parts – you can probably switch around between Feast and Double-edged Sword, Vampirism and Natural Talent, Wanderer and Savagery and Merciless and Meditation depending on your personal play style.

My personal choice goes as follows:

Natural Talent > Vampirism – more ambiguous since your Q benefits from spell vamp, but I found myself leaning towards Natural Talent for its (here comes the awful pun) natural synergy with Deathfire Touch’s scaling, as it’s a little bit of bonus damage you gain on level-up, as opposed to being entirely reliant on items for your scaling. I find this helps his scaling curve a bit, but it comes at a cost of lane sustain.

Wanderer > Savagery – I don’t have a lot of issues with lasthitting, so this is pretty much a “whatever doesn’t feel useless” choice in my book. If you’re not used to Urgot’s lasthitting, auto attack range and attack timing, you might want to take Savagery though since it also benefits his Q.

Meditation > Merciless – 1.5% missing mana per 5 doesn’t sound like all that much, and usually isn’t, but once you get your Tear of the Goddess, you will find that with a growing mana pool, this actually is a very nice mastery to have for additional sustain. 500 missing mana translates to 7.5 mp5, which frankly I find to be quite convenient at around 10 minutes into the game, and along with the Corrupting Potion it’ll do you a fair bit of good pre-20 minutes and after your Tear purchase.

I hope this little piece gave you a bit of an understanding as to why I believe Urgot should at least be considered as a pocket pick for professional play, or yourself if you enjoy the playstyle he offers.

His damage is fantastic, he can still slow people, he can still shred people’s armor (which, with the ability to run up to three AD carries in the current meta, might just be what you want), he still reduces their damage output, and well, both Deathfire Touch and the new AD itemization really just boost him over the top for me.