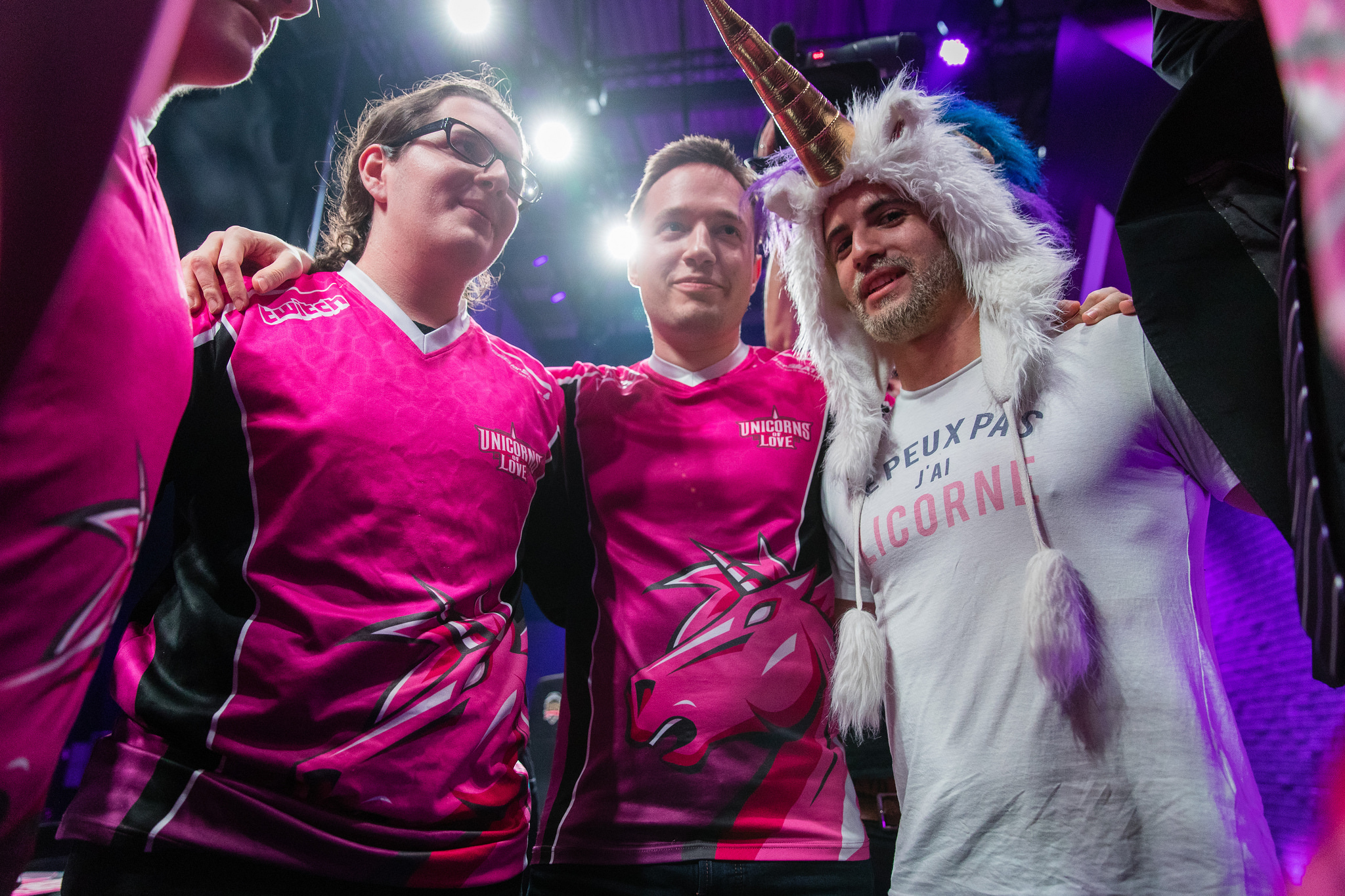 Unicorns of Love has transformed into one of the best teams in European League of Legends.

After ascending the league table at the end of last season, their choice of continuity over change has paid off in a big way. This is a team that plays together, especially in the mid game fights of which they are so fond. As a team, they have the most kills in the region (tied with H2K Gaming) and boast the best mid/late game rating—by far. They want to suck you into fight after fight—which usually go their way.

That’s not the way Misfits want to play. It’s not that they’re afraid to fight—they beat Splyce last week by grouping and forcing Splyce out of their split push pattern. But they are much more comfortable trading sides of the map and using superior macro to push down towers. It’s a controlled style of play that relies on vision to set up advantageous fights around neutral objectives.

Who has the advantage when these two meet on Sunday?

As we wrote last week, Misfits’ two key players are jungler Lee “KaKAO” Byung-kwon and support Lee “IgNar” Dong-geun. That certainly proved to be the case in their victory over Splyce. The vision that these two set up allowed them to beat Splyce in tempo and give them free objectives.

The problem for the team is that, in the lanes, they face even bigger deficits than they did last weekend. Top laner Barney “Alphari” Morris has improved steadily throughout the split, especially as the meta has come to favor split-pushing champions. But Kiss “Vizicsacsi” Tamás is, hands down, one of the best top laners in the region. He fights as well as he plays in lane, something that will be a big problem for Misfits.

The duo lane is not an area of focus for either team, though UOL’s Samuel “Samux” Fort is stronger in the early game than his Misfits counterpart. Then there’s mid lane. Misfits’ reverse-sweep of Splyce was keyed by Tristan “PowerOfEvil” Schrage really stepping it up in fights, assassinating people on mobile champions like Ahri.

But Fabian “Exileh” Schubert is exactly that type of player, only better. Unicorns will take almost any fight because they trust his ability to clean up. He’ll even start fights when his team needs him to.

Don’t believe that Exileh has the green light? Oh, here he is with a Protobelt-Flash initiation that blows a hole in Splyce’s team composition. He played the setup man in this game on Vladimir, but don’t let that fool you—his 166 kills lead the region by a mile.

Multiple times this split, Unicorns have made it through a shaky early game only to turn the jets on when they start fighting. They’re fantastic at keeping their tank line together and protecting the carries. That fighting has carried them to a fantastic finish while Misfits stumbled into the playoffs.

All-in on the mid lane.

What can Misfits possibly do? First, they need to target the jungler. UOL’s Andre “Xerxe” Dragomir is a careful, supportive type, and he was one of the first in the region to pick up the likes of Ivern. His pathing has improved as the split has worn on but he’s not the most creative jungler. UOL’s lanes often win on their own.

Misfits beat Unicorns in their only regular season meeting by abusing Xerxe’s pathing. KaKAO was able to find early ganks that helped stabilize his lanes. Then there’s Exileh, who can take some really bad trades in lane, sometimes forgetting both where his own jungler is and where the enemy jungler could be. Mid-jungle synergy can be a weakness for this team, and that’s something that Misfits need to exploit.

We just saw three straight games where PowerOfEvil carried. PowerOfEvil is known for over-aggressive all-ins where he misjudges his dueling potential. But they’ll need him to play extremely aggressive lest the team fall fatally behind. They need more all-ins from him, not less.

Ultimately, Unicorns has more ways to win this than Misfits. They can split push, and boy can they fight. Their creativity in the draft phase can also be an advantage, as long as they are wary of going too far off the deep end (looking at you, Immortals). So far, only G2 is able to beat them consistently, and since that week six loss to Misfits, they have gone undefeated.

Above all, Unicorns want a fight. And though it isn’t their nature, Misfits may need to give them one.