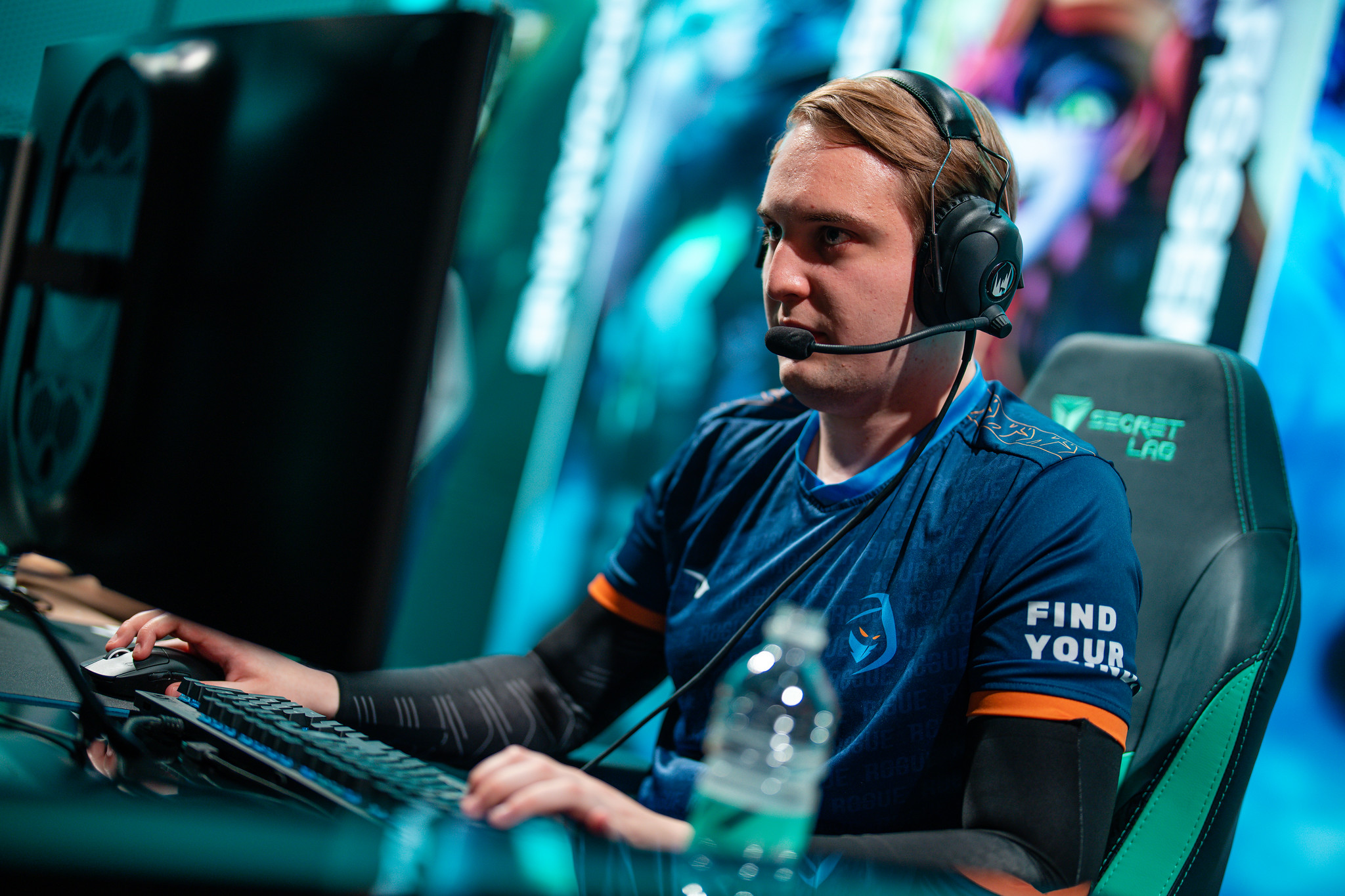 To the surprise of many League of Legends fans, Astralis ended Rogue’s nine-game win streak last week in the 2022 LEC Spring Split. A day after, the boys in blue once again lost, but this time against Misfits Gaming.

For Rogue’s Trymbi, those losses aren’t anything to be worried about but are instead an opportunity to improve on their weaknesses. After the match against Astralis, the support player talked with Dot Esports about the team’s work so far in 2022, learning to synergize with new players on the team, and trying to discard the so-called “Rogue time” meme.

What went wrong versus Astralis? Can you break down this game?

Trymbi: Everything was going fine until we went to invade their red buff, while it spawned for the second time. We failed, and Ahri lost her ultimate and Flash, which led to her being dove a few moments later. We didn’t read and communicate that play in time. What’s more, afterward we got dived on the bot lane, which could have been easily countered if I had flashed Vex’s ultimate.

A lot of things, which should never happen, happened, and it got out of hand pretty quickly.

Despite many mistakes early, the game was still winnable later on. However, we weren’t really present on the Rift today. We didn’t play to our standards. I’m a little saddened by the fact that that’s the way our win streak ends, but on the other hand, if we were to lose against someone, I’d prefer to do it against a 10th-place Astralis rather than versus G2 Esports or Fnatic, who are right behind us in the standings.

All in all, you learn from your losses and there’s much to pick up from this one. We might not be lossless now, but we still need to focus on showing that we can play like the best team in the league.

You could say that this game was sort of a wake-up call for you, but as you mentioned, I expect it’s somewhat comforting that it was only against the last-place team?

Personally, I don’t really like losing, and let’s be honest, no one does. In a way, at the back of my head, I had a small hope that we could make a miracle run and become an 18-0 team this split.

This year, I hugely want to prove that we are a great team, that I’m a quality player. This loss doesn’t mean that we can’t do that anymore, it’s just we won’t be able to do it in such an admirable fashion as we could if we had a perfect split.

In the last two splits, you finished well in the regular seasons (second in spring and first in summer). When you embarked on your adventure in the playoffs, you kind of fell short, though, especially in the summer playoffs. How do you plan on changing that, especially with the addition of two inexperienced players to your roster?

Last year, we knew that there were a lot of elements of our gameplay that we need to improve. I reckon that when preparing for the upcoming playoffs, learning how to adapt to various situations will be pivotal. And we need to be prepared for everything. Naturally, playing best-of-ones is different from playing best-of-fives, so there’s a lot of prep we need to do in the forthcoming weeks.

As Rogue, we need to learn how to become the best team we can and become such a version of ourselves. With two new players, we need to get to know each other as well as we can, so that we know how to play with each other on our highest levels. Once we do that, I’d say we will be able to easily outplay everyone in the European competition.

Keeping our mental approach in check is also important. We can’t allow today’s loss, or any other that comes along the way, to get to us.

When it comes to mentality and keeping everything in check, by listening to your weekly voice comms, I realized that you seem to be the main shotcaller on the team. Was this a squad decision or did it just turn out to be so during games?

It just sort of happened. We didn’t discuss this aspect that much before the season started, whatsoever. Although, I don’t see myself as the main shotcaller currently. The problem with voice comms is that they show specific situations, and in them oftentimes I’m the most vocal person. But, throughout the matches, everyone gives their own perspective and ideas on how to play the game.

This is also somewhat a result of how the game is played in today’s meta. With teleport being basically out of play until the 14th minute of the game, only jungler and support have an impact on the other parts of the game. And with the former liking to farm a lot, it leaves mostly me to impact the other areas of the game without losing too much.

I wish to become the main shotcaller in the future, though. However, actually, I wouldn’t say I’m there yet.

So, after half of the split and the occasional loss, you’re still at the top of the league. What’s your opinion on the rest of the LEC?

Right now, teams aren’t in their best forms yet, with us included. Everyone is trying to figure out the meta and the best way to approach the game.

It’s tough to say if someone is a direct threat to us, regarding the battle for first place. Naturally, there are squads that are able to defeat us. Looking at the first half of the split, it looked like we didn’t have many problems with most of the opponents. However, our games aren’t perfect. Versus G2 or Vitality, for example, the matches weren’t clean, and we made some mistakes during them.

So far, some games are incredibly chaotic. Right now, we are a team with many qualities, and we should beat everyone in Europe. Nevertheless, with time, other teams will become better and better. Everyone will come down, once again, to the playoffs, where participants will be truly tested. And I hope we will attend them since everything in League can happen.

When talking about approaching playoffs and working on your weaknesses, to me, it looks like Rogue has tremendously improved in terms of converting your advantages from the early stages of the game to the later ones. Would you agree?

I’d say that currently, our gameplay in the early and middle game is much better. We play much more cohesive, and we’re improved in terms of teamwork. This allows us to close games decisively and don’t throw our leads.

I think I would agree with you. So far, there’s no “Rogue time,” that was there throughout 2021. When we get leads, we try our hardest so that the enemy teams get as few resources as they can. And personally, I’m very pleased with our progress.

So we talked about working on the phantom which was your so-called “Rogue time,” and we’ve mentioned that your gameplay is looking more united with every game. Still, it’s surprising since you’ve had two roster changes in the offseason. How has it been working with Comp so far, who, undeniably, is much less experienced marksman than Hans sama was?

In my opinion, he has a similar playstyle to Hans, so there aren’t many issues in regard to our two-vs-two playstyle. Naturally, as you’ve mentioned, Comp is a little inexperienced in comparison to Hans. So, as a result, in some situations throughout the matches, we’re not on the same page. But there’s nothing wrong with that, we were prepared for this, and it’s just a matter of time to work it out.

On the other hand, mechanically, Comp is incredibly talented. He can carry a couple of games on his back. Although, we didn’t have a so-called crisis, during which things aren’t going our way. Maybe we’re about to meet in the forthcoming weeks since it has to happen somewhere during the season, we’ll see. Nevertheless, so far we’ve been doing amazingly I’d say, and I’m content with my cooperation with Comp.

Rogue will be back in action today when they take on MAD Lions at 3pm CT.