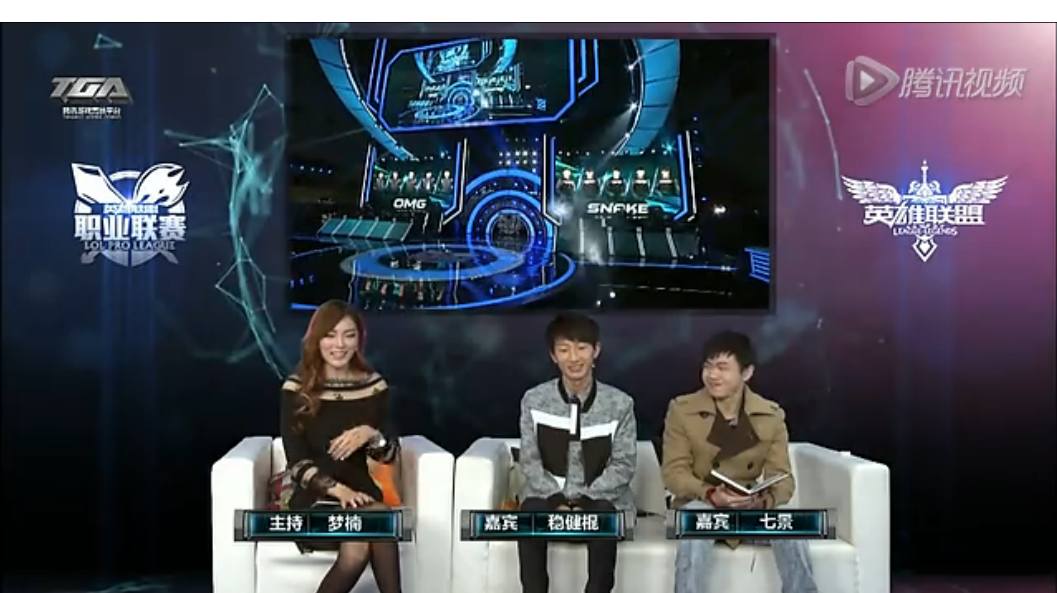 Hostess: OMG vs. Snake today: the old 4 protect 1 comp. vs. the new! Snake haven’t shown the similar dominance as their entrance into LPL.

QJ: Yes, since the patches update so fast, Snake’s players haven’t adjusted to the new champions.

Hostess: We saw Cloud in the studio today. I heard the combo of Cloud and Uzi is fixed for OMG’s bot lane. They are definitely playing Uzi today. Do you guys think OMG will lane swap bot?

WJG: Yes if they pick Sivir they will swap. Looking at Snake’s ADC, he does look strong. But new teams always start strong but fades toward the end. Everyone is hoping Kryst4l to pick up his skills again.

QJ: (Talking about WE’s performance at IEM) I ran into XiaoXiao. He told me WE was thinking before the IEM tournament to run either Styz or Mystic after they return to LPL. But since they beat GET, it’s definitely going to be Mystic playing from now on.

Hostess: I feel like when OMG is at a disadvantage in a game, they don’t hold their ground as well. Everybody on OMG wants to play safe, but Uzi wants to go in and kill himself. Looking at Snake, they were like the old OMG, but the dark horse fell off real quick.

QJ: Mostly their champions all got hit with a nerf bat. In scrims right now they are practicing a new bunch of champions. After researching Snake’s current champions, their top laner loves to use Hecarim, and mid likes to use Viktor.

QJ: OMG bans Nunu to target Snake. Whenever Snake is on purple side, they have an 80% chance to pick Nunu. He pairs too well with any ADC.

WJG: I feel Lee isn’t as strong as other jungler. Both junglers all just farm in the early game. Lee can’t do too much early and he falls off late. Looks like Snake picking Maokai and Xerath to farm to late game.

WJG: Bot lane is in favour of OMG. Kalista can dodge Corki’s skill shots very well, and Thresh can flay away Leona.

QJ: I feel OMG might lane swap, or Uzi is going to get camped again with their match up advantage.

WJG: Nobody expected Snake to win. I thought Snake lost at their towers, but Xerath hard carried.

QJ: Ya OMG’s early game tempo is off. Nidalee kept camping Rumble and nobody helped him. The key focus to Snake’s comp. is Leona. She shuts down Kalista too hard. Leona and Nidalee’s duo roam is also too strong early game. Loveling overhelped OMG’s bot lane but left Gogoing to die.

QJ: Uzi must be mad that he won lane so hard but got focused by Leona in team fights. But Leona is still too weak in early game, have to wait until level 3 to do anything.

QJ: OMG will pick a safer comp. this time. They had a strong early game with their last comp. but can’t siege or take objectives late game. That Lee pick was also weak.

WJG: Nah he went to wash his face and calm down, I saw him in the washroom. Snake is really good at dragon control.

QJ: Ya their jungler especially can control dragon very well. Looks like Snake is going to lose in lane again, no Nunu to baby sit the bot lane. They have to lane swap. That Kog pick. Kryst4al is thinking it is ok if you kill me, I will just blow up in your face.

WJG: Ya there is no way Kog can do anything against Lucian in lane. Janna has no healing ability. If Kog ever gets hooked he can’t even walk forward to take CS.

Hostess: I feel like OMG don’t know how to play with an advantage. They are too used to going even against good teams.

WJG: Looks like OMG can’t get 3 points. Uzi looks depressed they can’t catch up to EDG.

QJ: Uzi still has a solo Q mentality. He is thinking I won lane so hard but why we still lost? Snake’s comp. is too cautious. They think if they won the first game with that comp., they will keep using it until it doesn’t work, just like the Korean teams.

Hostess: LGD got schooled yesterday by EDG in the second game.

QJ: Ya they lost at lane swap hard in the second game. Clearlove’s Nunu and Leona destroyed LGD with dual roaming.

QJ: It was supposed to mean Masters. But in Chinese, 3 means retreat. So their team = Must retreat.

QJ: LGD has a 100% win rate over M3 on blue side, and a 70% blue side win rate overall. LGD bans Xerath and Corki, two champions that can do well regardless of laning.

QJ: M3’s new jungler used to be WE.A’s trial jungler. He is a relatively new player, never played any competitive games except for LPL. Listening to our Korean coach, Acorn’s Rumble is #1 in Korea.

WJG: I think the first team to use Kalista is Imp on LGD. He didn’t use him very well at first, but then everybody learned how to dodge skill shots as Kalista.

QJ: Cho’gath,  a disgusting champion with strong wave clear, survivability, and CC. He can also block choke points. Wow Ryze, nobody picked him for many patches after the nerf.

WJG: Looks Dade is going to roll his face over the keyboard then get silenced by Cho’gath.

QJ: M3’s comp. relies on Hecarim and Rengar. They run really fast, Ryze can keep up with his ult move speed but the rest hard to say.

WJG: Look at Weiless laughing, “do you think this taste good?”

QJ: Dade thinking to himself what he did wrong that game. I think LGD tricked M3 by picking Cho’gath and ruined M3’s comp. They didn’t expect Weiless to pick Cho, but they countered themselves by picking Ryze into it.

QJ: M3 bans Cho, too disgusting of a champion.

WJG: I think M3 wants to play another comp., they don’t want to play Cho either.

QJ: Must be weird for LGD’s support, not sure whether to protect his carries or go in. I think Zed is a good pick against Viktor. Weiless picks Ahri; Ahri is weak this patch. Both teams are picking double AP comp. Everybody is going to spam skills in team fights. Sivir is going to use ult and everybody going to rush in.

WJG: Nobody expects LGD to lose. I think LGD messed up the dragon fights hard. Felt like I am going to fall asleep watching this game.

QJ: We should also re-watch how the Gromp slowly licked PYL to death.

Hostess: Well everyone going 1:1 this week. Ranking stays the same.