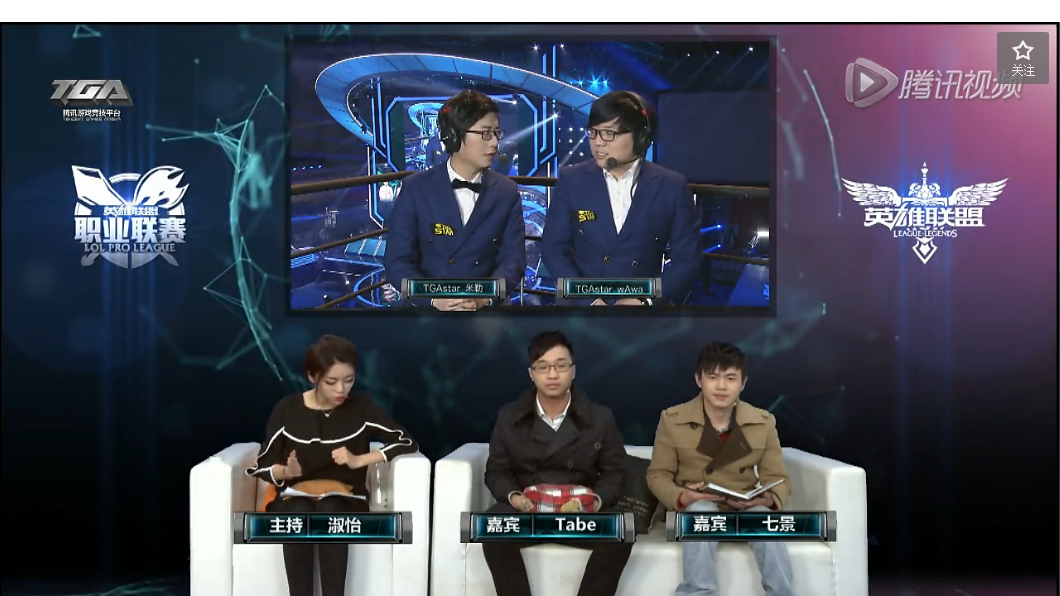 Hostess: How do you guys feel about the match?

Tabe: I am very hopeful for LGD…but first let QiJing (QJ) introduce himself.

QJ: Hi, I am the analyst for team King. My job is to scout opponent’s champion pool, timings, and item build order.

Hostess: Do you have any problems communicating with Korean coach?

QJ: A little bit of problem, but we use English and I remember all the skills/champions/items by their English name.

Tabe: Do you coach or just gather data?

QJ: I give data to coach and we discuss what to do. He doesn’t know the Chinese teams as well as I do.

Tabe: I feel like the bottom teams right now should just think about keep their spots, or at least obtain a good record through cheesing stronger teams to make their fans happy. At least the fans will remember them if they can take games off of a strong team like EDG.

QJ: Cheese? You mean Ezreal jungle? At the moment he is actually OP, seriously.

Tabe: If I have to choose the strongest team atm, it’s EDG. VG right now needs to pick up their game. Speaking with VG, I am really close with Vasili and I hope he steps up. Back when I was on RC, we were good friends. I used to feel his muscle all the time.

Tabe: Annie ban from LGD. I really like Annie, she can be played in any lane now that she has better scaling. Even if she is set behind as a solo laner, she still has the utility of a support Annie. But as a mid laner, she is missing wave clear.

QJ: Leblanc pick for EDG. One of the few mid laners that haven’t been beheaded by nerfs yet.

Tabe: ADC pick for EDG must be an autoattack focused ADC. Kog better than Twitch. Twitch has too many limitations; he is useless without his ultimate. LGD also made a mistake by banning Corki. If they didn’t ban Corki, LGD might force EDG to pick another comp., but they forced EDG to play junglers to protect their ADC instead of Rek’sai and J4 since Corki isn’t available. I think they should ban Nunu after banning Lulu to kill the juggermaw comp.

Tabe: LGD should also ban Leblanc or first pick. But picking Leblanc against a good Leblanc player is not very effective, because he will know how to play against the champion.

Hostess: I feel like LGD was afraid of Kog, but PawN showed up huge.

Tabe: That’s why EDG paid a ton of money for PawN. Too many threats for the other team to manage together with Deft. I also don’t like Nami from EDG, support should be Morgana pick. Nami is a strong laner, but Q is hard to hit. She should be used with Yasuo when he used to be strong. Morgana also counters Vi very hard.

Hostess: Nami couldn’t protect either carries with her abilities if she can’t land them.

Tabe: What do you think LGD will ban?

QJ: I think they will ban Nunu and think about Leblanc. PawN’s Leblanc is too scary. Ah they are letting Flame play.

Tabe: Ahh Annie support. It was so scary in S3, Annie can one shot people if they are not using Dorans shield first item back then. PawN takes Lulu. Lulu is very strong once she gets Lich bane with high AP. LGD takes Viktor.

Hostess: Anyways next match we have EP vs. King! We have the analyst right here from King, maybe he can leak some information.

QJ: I am still new to casting. I don’t really know what to say.

Tabe: Well, if your team wins you can say our team destroyed them. If you lose, you can say how much the other team used strategies specifically targeting your team.

Hostess: Anything you can leak to us QJ?

QJ: Well first round, we should ban Annie/Viktor/Gnar. Not sure if we should ban Leblanc instead of Viktor though. A lot of teams are afraid of Viktor because many teams have not seen it, they could get blown up by unexpected Viktor bursts.

QJ: Ya but my entire team wants to ban that champion. Very scary.

Tabe: When Gnar got nerfed Hecarim became strong. Do you guys know how to use that champion?

QJ: Yes we do. Hecarim doesn’t have a strong counter in the game.

Tabe: Hecarim is really punished by the enemy though. Since he doesn’t take Flash but Ignite, the enemy team’s jungle and top lane will just send waves in your turret, forcing you to miss CS under tower and camp your lane. If you try to pick up CS away from turret you will die instantly. Very disgusting strategy.

Tabe: But Hecarim is really strong because when player skills are equal, the Ignite summoner makes a huge difference in 1v1 when the enemy laner can’t do without Flash. Once Hecarim hits 6, he gets a free Flash.

Tabe: QJ looks like you didn’t lie to us with those King’s bans. Irelia is up, I feel like King picking Irelia is going to have a hard time against Hecarim until level 6.

Tabe: EP also banned Janna, but they can take Morgana. Why King play Cho’gath? I really don’t like to play against Cho’gath. His silence lasts forever, and the opponent must buy flask or can’t sustain in lane, but flask gives no stats.

QJ: Maokai combo with Cho’gath. Gap closer root into feast onto the carries.

QJ: A bit too much mistakes from King.

Tabe: I think Cho did well in lane. But Maokai and ADC carried very hard. Maokai and Kalista played very well in the dragon fight, tons of AOE damage. I think they had very good communication between them.

Tabe: QJ was very proactive after that last game. He rushed to his team’s side 0.1 seconds after the broadcast ended, saying a few words to Assassin.

QJ: Usually we only talk to player after the series. Otherwise it will disturb their mentality.

Tabe: Similar P&B, teams do this usually when the other team isn’t very strong. But in life or death matches, teams must change the P&B and they might take hours discussing what to do.

QJ: We thought about EP first pick Thresh, but they took Leblanc. We thought they might ban Kalista and Cho but they banned Ahri instead. So we take Thresh again. I don’t think they will pick Cho because they can’t play him.

Tabe: So if you guys pick Cho, you aren’t really scared of anyone except 1-2 AP carries like Orianna.

QJ: Zed is also possible as a counter pick against Cho.

Tabe: Looks like the LPL players care more about appearance, wearing their own apparel on top of the team uniform. But when it comes to female fans, the important part is to play well. Back when I was a player, I used to go on stage without washing my hair, and it didn’t matter. The truth is, it doesn’t matter if you are ugly. If you play really well, female fans will think that you can be a safe and reliable boyfriend.

QJ: Another good ADC pick with Maokai and Cho is Sivir. But Wuxx doesn’t like playing her, to be honest, so we don’t use her.

Hostess: King with 17 points, higher than SHRC. Looks like King played with a good mentality.