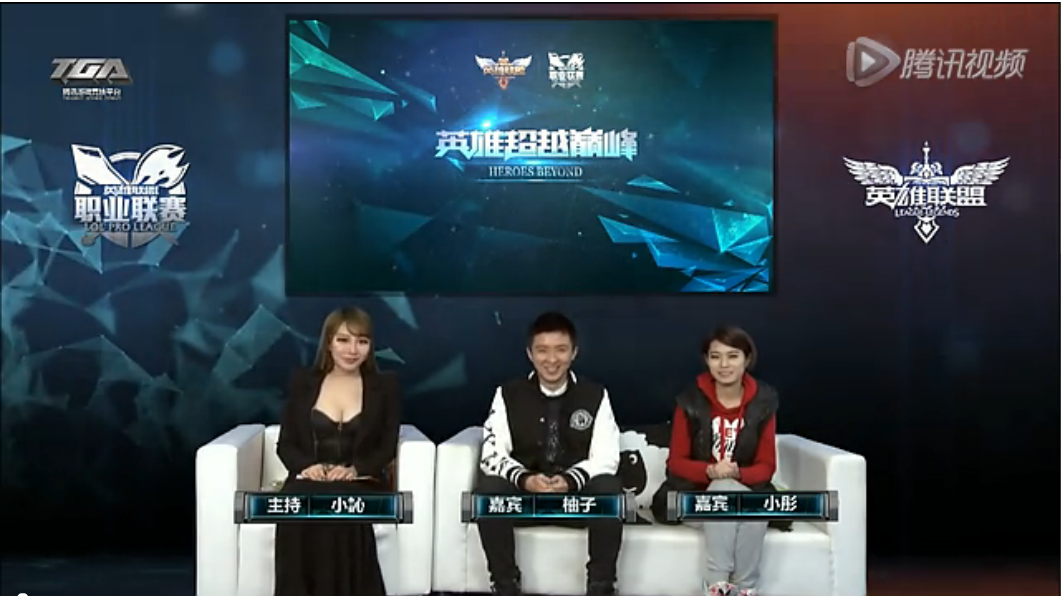 Hostess 1: Pomelo are you familiar with these players?

Pomelo: I am close with Aluka. I trained with him in the past. He is an old player started in Season 1.

Hostess 2: M3 kept changing its junglers. The new jungler Condi is rumoured to be strong. Watching him yesterday he seemed mediocre though.

Hostess 1: M3 ranks higher than WE at the moment. Back when M3 was WE.A, they were already rated higher than WE. Yesterday Spirit played so well against Snake.

Pomelo: Ya the Korean big (bottle of) “Sprite”. I thought Spirit’s name was Sprite at first, but I double checked to make sure it wasn’t.

Hostess 1: Pomelo, I remember you holding a bottle of Sprite in the past. Were you drinking Sprite?

Pomelo: Not really. I used to be a flamer. I called someone in Solo Q “something something Sprite”. Then I just held a bottle of Sprite in the face of everybody.

Hostess 1: Is calling someone a big bottle of Sprite an insult?

Pomelo: No but it sounds like another common insult word. (Note: I am not going to explain =p)

Hostess 1: Why is everyone on M3 looking down? Maybe they are texting their girlfriends before the match? Do you do that Pomelo?

Pomelo: Of course not. But if you look at Cool and the others when they text each other, they seemed to have the same weird look on their face… (Gay jokes)

Hostess 1: Cool and Lovelin? Are they up to something? Don’t you guys live together?

Hostess 1: I heard when two people live together in the same room for too long weird things happen.

Pomelo: I share the same bed with Luo right now. When I go to bed late, this guy takes up the entire bed and I have to tell him to move over.

Pomelo: WE looked great recently but M3 improved faster once they developed their synergy. The saying is “when Spring comes, Dade returns”.

Hostess 2: M3 also depends on Looper to do well and not get targeted in lane. He picked Rumble once and Gnar four times in the past for a safer lane, because Rumble usually gets targeted.

Pomelo: I think old players like Aluka are better than new players when it comes to team fighting and timing focused champions like Gnar. They have more experience.

Hostess 1: Spirit is wearing a surgical mask. I heard the LPL casters joked the reason why Spirit wears a mask is because YuZhe told him not to speak, so he cannot shotcall WE to victory. Isn’t YuZhe an old player as well?

Pomelo: Ya he used to be a moderator in the community long time ago. Viktor seems so strong right now. He is good at laning and wave clearing. He has a zone control ability and a shield that can block both AD and AP damage. A lot of players use Ghost as a summoner skill because Viktor isn’t very mobile in team fights or able to arrive quickly in skirmishes. Viktor with his rotation + Ignite = insane burst, especially his ultimate AOE is really strong for Dragon fights.

Pomelo: M3 has the late game, but WE has the early game advantage with better synergy in skirmishes. Lee+Viktor combo is difficult to use for M3 because Viktor doesn’t have a reliable CC. WE should have the advantage bot lane with Janna+Graves against M3’s Kalista+Thresh.

Hostess 1: Ya, also Hecarim in LPL has a horrible win rate totally unlike LSPL, where the Hecarims are usually much more aggressive.

Pomelo: M3’s bot lane carried hard. They burned Flash on WE, then called Lee Sin for easy kills. Otherwise Lee wouldn’t have tried to gank Janna bot lane so early. Maybe it’s time for Spirit to take off his mask and start speaking? Let’s see if Spirit can pick up the tempo for WE, which is usually how WE wins.

Hostess 1: Are you close to Styz? I remembered him when he was on LGD.

Pomelo: I used to focus on ganking him when I was playing. He was easy to catch because he played so aggressive. His old support Pyl is much better.

(Talks about the hostesses’ love interests, and gay pro players in LPL???)

Hostess 2: LPL feels like OGN at the moment. The sister teams are very similar in terms of skill level.

Pomelo: Sister teams like to only train with each other so they don’t leak strategies to outside teams. I remember in the past when we tried to schedule scrims with the Korean sister teams, they always avoid us because they only practiced with each other.

Pomelo: That’s true. For example, when we have scrims scheduled at 2PM, we would first play a game at 1:30 to warm-up and arrive at scrims at 2:10. But Koreans care a lot about time. If they said 2PM scrim they start preparing at 1:30.

Hostess 1: Don’t you guys have a sister team called OMD?

Pomelo: Ya but we don’t live with them. You guys know Lovelin care a lot about his fashion? We used to go out and he would pick out different ties, suits, and shoes and ask us how he looked.

Hostess 1: Doesn’t Gogoing also care a lot about looking good? I remember travelling with Gogoing and Caomei to Wuhan city for casting. We agreed to meet up at 9AM, but Gogoing took an extra hour, not sure if he was doing makeup or whatever. Isn’t Gogoing wearing a Fendi or Prada bag right now to the studios?

Pomelo: I don’t think the bag is legitimately made though, too expensive otherwise.

Hostess 2: Xiaohu is really strong in mid. Before GT started, they used Leo mid because Xiaohu was underaged. After replacing Xiaohu they started to regain their strides. Then they realized their jungler was weak, so they switched Danger with Hui. In his first two games, Hui got a pentakill on Rek’sai.

Pomelo: (Speaking of a support player that replaced a Korean mid) To be a good support you have to first be good at another role or understanding every roles’ abilities. Like Lovelin, or Zero who used to play another position. I used to play ADC when I first started. When I played with Fzzf and Clearlove on an amateur team, we beat E-home that used to be a pro team. After that, other people recommended us to play professionally.

Hostess 2: How does OMG look?

Pomelo: I rarely watch their scrims. Basically our management just pick whoever does well in scrims. We don’t have a lot of subs aside from support subs, which we have enough people to make a whole team of only sub supports. All of us became San’s support at one point. At first was Lovelin, then Gogoing briefly, then me. Uzi is really picky too when it comes to support. He doesn’t flame you but he is very passive-aggressive. He often asks “How could you make a mistake like that?”

Hostess 2: I heard it’s important for the bot lane to develop synergy both spiritually and physically, like sleeping together. Isn’t that the reason why Luo and Uzi doesn’t have the best synergy? They are both chubby and can’t fit on the same bed. Why you guys use Xiyang/San?

Pomelo: Because their duo Q is really strong, and they played very well in scrims. San played a bit of top in Solo Q but he isn’t transitioning there.

Hostess 2: The common rumour is OMG has an excuse if they lose with the secondary bot lane, but if they win, it would look really bad for the other team.

Pomelo: It’s not like that. San played well against EDG in the past too, so don’t flame him. We also pick our bot lanes depending on who we are playing.

Hostess 2: Xiaohu was really strong in the WTG 2014 tournament. He beat Snake, King and all the other dark horse teams. He lost against LGD in the finals, but his Leblanc was godly.

Pomelo: (Camera pans over Lovelin) What is he wearing a scarf right now? I don’t understand his fashion sense at all. And we don’t talk a lot when we eat, usually just checking our phones.

Hostess 1: Don’t most of OMG players have girlfriends?

Pomelo: Ya when they have break they just take their girlfriends to movies. As long as they return to training camp on time. Remember I posted a picture of security cameras in front of our base? They record the time we come in.

Hostess 1: Do they also track which girl you guys bring in?

Pomelo: No we can’t do that lol.

Pomelo: If Cool gets solo killed again, he will get flamed to death. They banned Leblanc/Ahri for Cool, Xerath/Lissandra/Viktor still up for grabs. If Lovelin doesn’t perform well, I am going to release a shocking picture of him.

Hostess 1: Where is Cool from?

Pomelo: He is from Hunan province. Why is Lovelin wearing glasses? He is not near sighted. San and Vasili both love to wear Gunnars on stage. They care a lot of their bodies. San uses a lot of supplements. They are also knew each other from before.

Pomelo: It’s a lot better than people think. There are no conflicts between Uzi ad San. Of course, San felt pressured because Uzi is one of the best ADC in the world, but so is everyone on the team.

Pomelo: I think Gamtee is going to ban Veigar, but Xiyang’s Veigar is garbage. Good Veigars aim to stun with E, but Xiyang can only trap people. I really like Graves against Corki, and Veigar is really good with ADC that has burst damage.

Hostess 2: There was a story when Uzi was streaming in the past. He raged quit and went to take a shower. People flamed him hard and he had to apologize with the OMG management to the public.

Pomelo: I really dislike Ezreal mid because he is extremely boring to watch.

Hostess 1: Wow so cool~~~Who taught him that move?

Pomelo: He came up with that move himself. When we went out for photo shoots, he always came up with his own moves that were different from ours.

Pomelo: San and Lovelin both messed up. Well, it’s gona be hard for me to go home today after flaming my entire team. Look at Lovelin, he is depressed, I think I saw tears. We are going to have a meeting to review the game and talk to all of our players. Sorry Lovelin I am going to leak your picture. Cool is really shy, he won’t say a lot to people he doesn’t know very well. But once he is familiar with you, you would realize all kinds of things would come out of his mouths.

Pomelo: Next time I am going to record Gogoing’s singing in the shower and release it to the public. Every time he showers, his singing makes me go crazy. Welp, I hope I am still alive by the next time I am here.