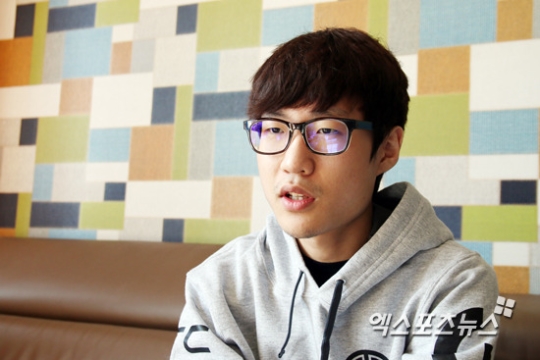 Disclaimer: All credits including photo goes to Mr. Park Sang Jin of xportsnews.com. This is just a fan translation.

A professional athlete posted a tweet on social network back in April. The tweet shared the player’s perspective on how aggressive and hurtful Korean fans can be. As a result, the player, as well as the Korean fan base, were heavily criticized for their actions.

His words resonated within the community and the athlete came forth again to give his response to the community following-up on his initial comments. Once again, his words stirred up the community and gave headways to debates and discussions about the fan culture in Korea.

I wondered after five months since this uprising on whether the player’s stance has changed and what was going through his mind when it all happened. Fortune have it, the player have come to Korea for his team’s boot camp session and I had the opportunity to hear his story.

Reporter: It has been awhile. Can you tell how you decided to join a North American team like TSM?

Lustboy: When I went to play overseas to North America and Europe during my time as a LCK/OGN player, I was impressed by the tournament system and astonished by the fan base. I also thought it would be a good opportunity to learn English. I was confident in my skills as a support player, so I decided if there was a chance to play for a foreign team, I would take it.

During my break from CJ Entus, I received an offer from the TSM management. I was worried about living abroad as it was my first time, but I thought that it was a good time to go overseas. If it was any other foreign team in North America or Europe, I would’ve had second thoughts. TSM at the time had a good record in their league and TSM was a well-known team even in Korea, so I accepted the offer right away without hesitation.

Reporter: How is your experience playing for a foreign team?

Even though we are from different countries, we are all human in the end. The culture might be different and speak a different language, but the thought process is similar. I am still doing the same things I would as a League of Legends player so there wasn’t much hardships to be had. I’m one of those people that can survive and adjust wherever I end up (laughs).

I would say speaking English at first was a problem for me. During tournaments, I would had to ask multiple times for someone to drop a pink ward because I couldn’t say it right the first time. Communication is key in League of Legends so I studied hard and did whatever I could to grasp the English language. Right now I can communicate with my teammates without any problems. I’m very happy about that.

Reporter: Back in the past, you had some choice words criticizing the fan culture in Korea. How were you feeling at the time?

Lustboy: When I tweeted about the fan culture in Korea, the public made backhanded comments and made degrading statements about me. This wasn’t all bad in my opinion. I learned my faults and tried harder to improve myself through all the hate. But it did affect me emotionally because people thought they had the right to be angry and did not consider how I felt reading those comments.

Reporter: Up to that point how did you view the fan culture in Korea?

Lustboy: Whether it’s eSports of sports, fans can fight with other fans or give harsh advice to the players. I think the players can accept this and understand that this is part of being a fan. But at the time, all I could see was hateful bashing and nothing that could be regarded as constructive criticism. I was really stressed out and eventually led to my tweet criticizing the Korean fan base. I didn’t want the fan culture of Korea to be a place where people get hurt; I wanted a change.

Looking back at it now, I should’ve mulled over and straightened out the points I wanted to make. People could’ve been hurt from my statements. But I have no regrets writing that post on SNS. There is room for criticism in sports. When criticism from the fans became personal attacks instead of being constructive criticism for players to improve themselves, it has gone too far. This is why I made that tweet. I noticed that people used my tweet as the basis to make speculations about me, so I posted a follow-up as a response to the community.

Reporter: In your post, you spoke of things which was hard for players to admit and say. But as a result, a lot of discussion about the fan culture in Korea started happening. Do you think the fan culture is different now compared to before?

Lustboy: Honestly, I did not expect my tweet and follow-up post to cause this much of a commotion. I was going through a hard time. I was worried about posting the tweet and follow-up after the online comments saying “this player is not a Korean” (not in a literal sense, but describing that the player does not share qualities of a Korean) even though I am a Korean.

But I think it was a good decision in the end. After the incident, people who shared my sentiments were starting discussions about the fan culture in Korea and how we should reflect on the current state. People gained the courage to stand up and speak their minds after reading my post. I think this is when the fan culture in Korea started to change and the personal attacks and hurtful bashing slowly reduced.

It will take time, but I believe there will be a day when the fan culture in Korea will not be based on hurtful speech. In my follow-up post, there were more comments from fans concerned for me rather than those who were posting hateful comments. If nothing has changed within the community following my actions, then all will have been for naught.

But things did change. Not necessarily because of my actions, but things are starting to change. I merely encourage those who were afraid to speak their minds to rise up. I want to thank and express my respect to those that did decide to step up and help bring change within the Korean fan base.

Reporter:  Do you have a goal as a player?

I want to make TSM the strongest team in the world. I hope for a day when the Western region becomes so strong, teams from Asia will come over to the west to boot camp. Of course there are obvious problems like ping and internet speed, so I think it might be a while until this goal is realized.

Reporter: Do you have anything to say to your fans? Be honest!

I have no regrets on what I did in the past. But I will admit I did say some harsh things led by my emotions. I want to apologize for this. I have no intention of criticizing Korea and its fan base. I believe that the culture in Korean fans will steer in the right direction and one day, be something Koreans can be proud of to boast to other parts of the world. I want to sincerely thank my fans who support and love me even with all the things I have done. If opportunity allows, I want to meet with all of you.