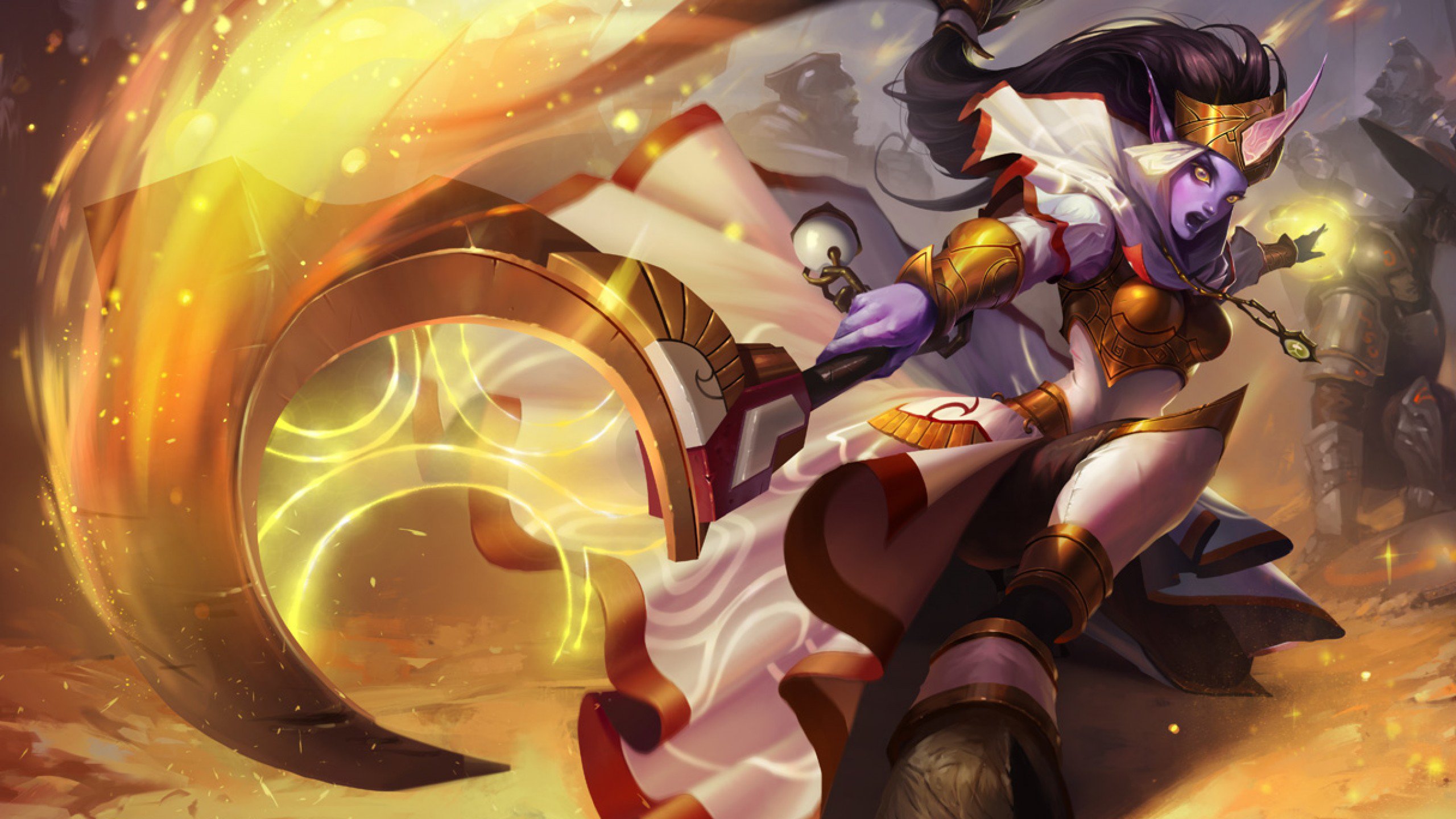 Soraka saw resurgence in mid and top lane a couple of years ago when she received self-heal buffs from her Q following the removal of the instant silence of her E. While the League of Legends community vividly remembers how hard it was to lane against her and poke her out of lane, she fell out of the meta after some nerfs.

The Starchild didn’t receive any significant buffs recently, so why was she suddenly picked by top laner Martin “Wunder” Nordahl Hansen in both of G2 Esports’ LEC matches this week?

Soraka’s Starcall (Q) serves as the bread-and-butter ability of her kit. It damages enemies, grants movement speed, and a healing-over-time effect, which allows her to sustain through the laning phase quite easily, while also giving her the ability to harass enemies with its high base damage. The ability’s self-heal allows you to sustain through the laning phase with ease thanks to its decent range, while also granting movement speed. The mana cost also allows you to spam it constantly.

Soraka’s Equinox (E) improves her poking capabilities and denies ganks; you can just press E on the enemy junglers path and it will buy you enough time to walk away with the increased movement speed from your Q. The ability deals a bit of magic damage, while also silencing enemies instantly.

Soraka’s Wish (R) allows her to help out teammates from any location of the map. The heal, which is further increased if allies are low, will always be impactful. Global ults were, are, and will always be powerful. Think of it as an allied Gangplank ultimate: use it either during team fights or to save a low-health ally from a gank.

Why is Soraka suddenly picked so much?

While she received no nerfs or buffs as of recent patches, many champions did. The meta is constantly evolving, and there are many melee champions picked up the top lane. Soraka is a good counter to them, and while she won’t be able to kill them, she can deny them quite easily with her Q spam and low mana costs.

A top lane Soraka will also allow your ADC or mid laner to survive much longer in teamfights, while also denying enemy champions dive potential. During early to mid-game, there are multiple dives happening over the map. As a top laner, sometimes teleporting in will not make much of a difference if your team is already dead. Your ultimate will have an immediate impact and possibly defer enemy champions from diving your teammates.

The Sorcery rune tree is the best for Soraka. Summon Aery will allow you to do increased healing and extend your poke potential. Mana Flow Band will make sure you never run out of mana during the laning phase. Transcendence will grant you the needed CDR to spam your abilities more often—especially your ultimate—and Gathering Storm will allow you to get the necessary ability power while going for support items.

Resolve as a secondary tree will make you tankier during the laning phase. Second Wind combined with the heal-over-time effect from Q will keep you topped up on health and unkillable in a one-vs-one scenario. The adaptive force runes are straightforward: You want more ability power early to be able to harass your laner, and scaling health is better than armor or magic resist early since you don’t need to be close to your enemy anyways.

This is your goal for every game. These three items are the reason Soraka is so strong in the solo lane. Athene’s Unholy Grail grants you additional healing based on damage dealt, and Redemption allows you to impact a teamfight from far away—even while dead. Ardent Censer allows you to buff up your ADCs into unkillable machines with additional attack speed.

The type of boots you purchase is flexible. If you face a heavy auto-attack focused team, such as one boasting a Tryndamere, Yi, Yasuo, or Lucian, then Ninja Tabi are the best boots to go for. If you face a heavy ability damage-focused team with a lot of crowd-control, Mercury Threads are your go-to choice to give you the extra magic resist needed, while also reducing the crowd control received. If you face a mixed damage team lacking crowd control, you can even go for Ionian Boots of Lucidity for the increased cooldown reduction on your abilities and summoner spells.

Spirit Visage is good against heavy magic damage focused teams since it will grant you all the necessary stats you need outside of ability power, while also increasing the healing received by yourself, allowing to keep yourself alive for longer. Shurelya’s is really good against poking teams; it allows you to engage on opponents much faster without giving them room to properly position themselves for a teamfight. The item is also great against teams which want to engage on you, the extra movement speed will help you and your teammates to dodge important ultimates when the enemy team decides to commit for a teamfight. Once the ultimates are down, you can turn around and engage on the enemy team instead.

As Soraka you don’t aim to win the lane, you aim to not lose it. Your bread-and-butter ability (Q) will allow you to farm safely, while slowly chipping at your opponents’ health. Your goal is to poke the enemy laner as much as possible to force them to back, while also not putting yourself in a vulnerable position. If you do not have a vision of the enemy jungler, play it safe and let the lane push to you.

Your goal is to reach level six, where you’ll be able to impact the map when needed with your ultimate and farm minions to get the required gold for your core items. Once you have the core items, group up with your teammates and start forcing objectives. While you will not provide tankiness or insane damage, you will be able to keep your teammates alive long enough for them to fill those roles instead.

Don’t give up early, even if you get camped by the enemy jungler. You scale more than most top laners. While they need items to become useful, you become useful at level six with your global ultimate, and that impact is further enhanced with every core item which you complete.