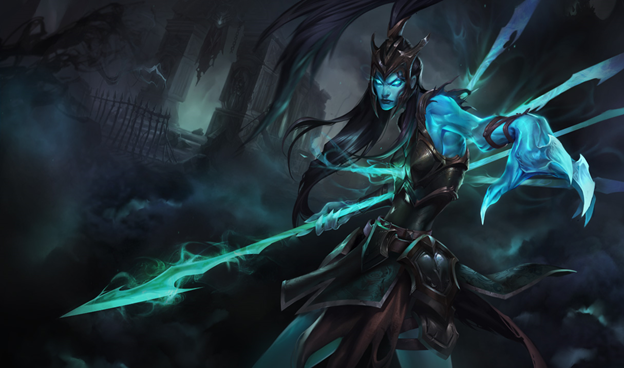 In the current meta as of patch 5.2, marksman are still the most important role in the lategame, since they do the greatest amount of consistent damage out of any role. However, raw lategame DPS is no longer the most important factor for ADC’s. The Marksmen that excel in the current meta are those with high versatility; they take objectives very quickly, lane well, excel in skirmishes, and provide a large impact in teamfights.

The newest AD carry is one of, if not, the strongest marksman out there. Her rend provides an insane amount of objective control, as its infinitely stacking damage can and will consistently do more damage than a jungler’s smite, so long as she has auto attacked the target (Baron or Dragon) enough. Her passive gives her an insane amount of mobility and kiting ability, as the short jumps make it almost impossible to land skillshots on her. This makes her teamfights and laning phase superior to most ADC’s simply because of how difficult it is for people, especially the frontline, to close in on her. In addition to all this, her ultimate provides utility and a guaranteed initiation for any team that is lacking in either regard. Her kit is almost perfect for any team composition, regardless of how good it was prior to her being picked (which coincidentally makes her a very good early pick).

An old staple ADC, Caitlyn is no stranger to versatility. Her kit, with her large auto attack range and escape from her net, makes her instinctively safe. In addition, she has the most stable power curves out of any marksman. Her early lane phase is incredible, with her long range pushing and harassment skills, her midgame is solid (especially if she makes use of her passive in bushes), and she scales well into the lategame (again because of her passive, her long auto attack range, and inherent safeness). She just does everything well, and similarly to Kalista, fits really well into the majority of team compositions.

Sivir excels in the new meta because of her “got to go fast” kit. She pushes lanes at all stages in the game extremely rapidly because of her Q and W boomerang abilities. The most important part of her whole kit however, is her ultimate- On the Hunt. This ultimate is the whole reason Sivir is considered versatile. She can either use it as an offensive ability to catch people, or as a defensive ability to peel for either herself or her team. Not only that, but she has a spellshield to block one ability, keeping herself safer and providing herself with technically infinite mana. This might not seem like a big deal, but as Aphromoo proved with his Blitzcrank in the first two weeks of NA LCS, one spell wins and loses games.

Graves has had a recent revival, mostly because of how badly he stomps most meta lanes and because of how good he is in skirmishes. He is a very safe ADC with a strong, low cooldown escape, who has the biggest power spike in the midgame out of any marksman. His ultimate plus Buckshot combo deals more AD damage in the mid game than any other ADC in the game. This fact, in addition with his innate tankiness from his passive, makes him extremely good in brawls, which are the very definition of mid game teamfights and skirmishes. His weakness however lies in his short auto attack range and his poor scaling, being outshone by just about anybody, as he has to get in people’s faces to do damage.

Corki, along with graves, is the perfect example of a midgame terror. His trinity force item power spike is gigantic, as it allows him to take down objectives very quickly. In addition, his kit gives him the sought after versatility of ADC’s who excel in this meta. He can push very quickly at all stages of the game, he can poke from afar with rockets from his ultimate, and he is very difficult to itemize against with the mixture of AP, AD, and true damage he deals. In addition, his Valkyrie makes him relatively safe because of how long range his escape is (it should be noted however that it is easily interruptible and has a very long cooldown, especially early game). However, similarly to Graves, he has issues later on in the game because of how short his auto attack range. He also tends to have issues dealing with the super tanks, such as Mundo, because of the lack of attack speed in his itemization, and because of the fact he does mixed damage (tanks tend to be itemized against AD and AP, and many Corki’s tend to not build last whisperer).

I consider Twitch a niche pick to watch out for because of his teamfight prowess. He can output more damage than any other ADC in mid to late game teamfights because of the long range and penetrating autos from Ratatatat. Teams looking to win the game through teamfights around objectives in the mid and late game should look to Twitch as a solid pick up (especially in combination with a peeling support such as Janna), even though he does not have any good escapes built into his kit.

As always, it should be observed that even though an ADC is not considered a top pick, there is still the chance they will be played because of a team playing priorities and certain aspects that the said ADC brings to the table.

These two are honorable mentions for very different reasons. Lucian is an all-around safe pick; however he has been nerfed early game to the point to where he is not the giant threat he used to be. He also tends to get outscaled by other ADCs, but his midgame power and mid to late game objective control is some of the best out there. Kog’maw is an honorable mention because of the tendency of games to go into the really late game. Many games now go past 40 minutes, and a full build Kog’maw does arguably the most damage from the greatest distance (with his Bio- Arcane Barrage on). However, he does not have any innate escapes and has a terrible early to midgame, which makes his power cover just too unbalanced to be a top pick.