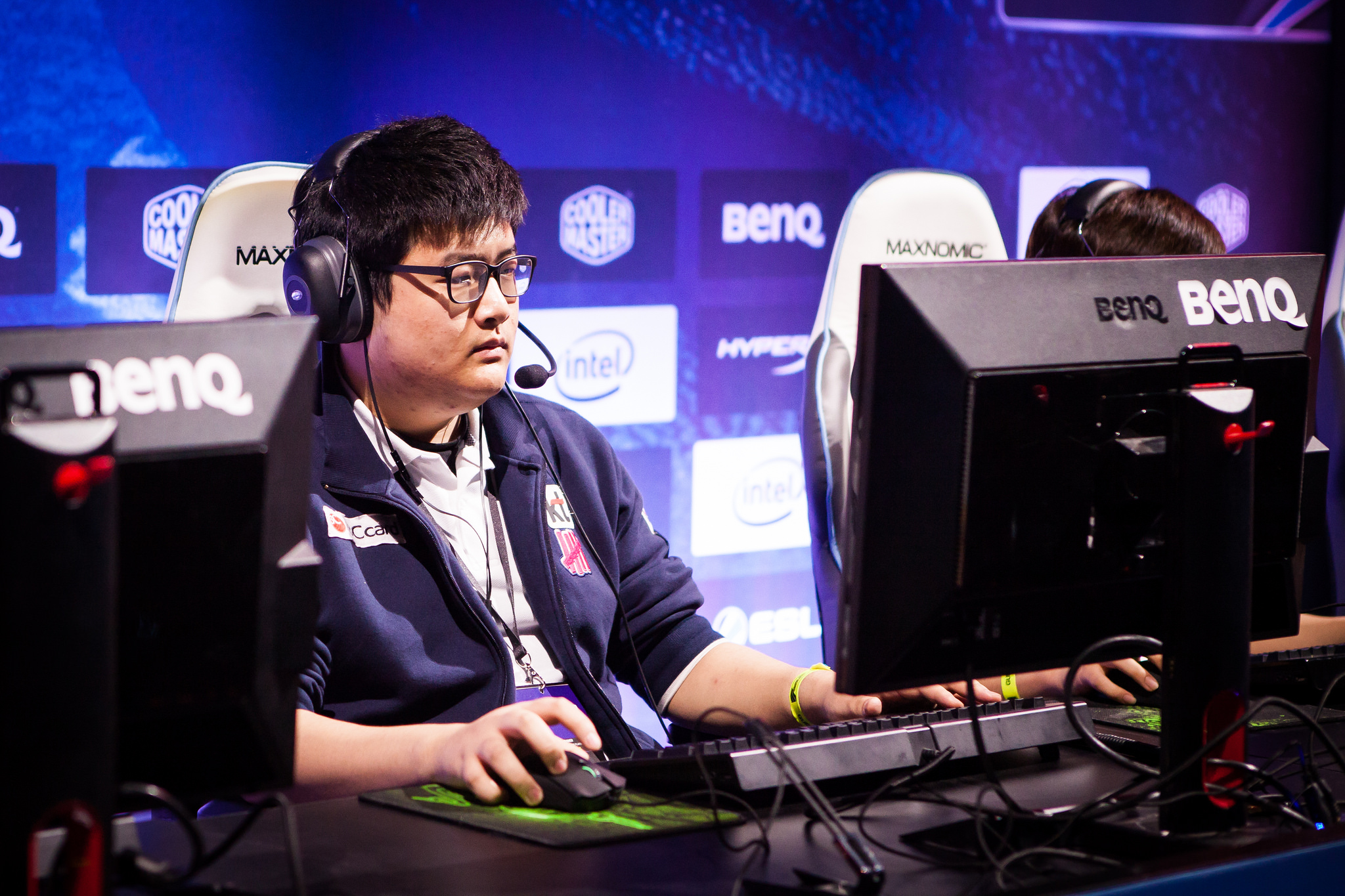 As exciting as matches and tournaments are on their own, I always find the context surrounding matches to be a key factor in enhancing the experience of watching the matches unfold. Knowing the historical component of the impact, a win or loss can have on a player’s or team’s career heightens the excitement. Seeing how individual performances can shape the way we think of players, make the big pressure moment they rise to or fall from only more intense. Thorin’s threads picks out key story-lines to follow, with their historical and cultural context explained.

IEM IX Cologne will see two North American LCS teams (CLG and Dignitas) competing in a tournament featuring two European LCS teams (ROCCAT and Gambit). With two amateur sides rounding out the six team field, the event lacks for the star power of IEM San Jose, but may provide an opprotunity for some of the middling LCS teams of last split to become a champion. Here are eight story-lines to keep track of during the event.

Ryu was one of the best Korean Mid laners of 2013, but 2014 has been most unkind to him. After KT Bullets’ eventual demise, and a brief swap to Jungle, Ryu hoped to qualify for LCS with Millenium and begin a successful career?in the West. Failure to even reach the final four of the Expansion tournament very much killed that initial dream and now Ryu may be facing his last chance to prove his worth.

If Ryu can perform to a high level at this tournament, then there are European sides out there still looking for a good Mid laner. It seems quite unlikely he can remain on ROCCAT, with all signs pointing to Nukeduck being their starting Mid laner for 2015, but with an exceptional performance perhaps even that is not impossible.

Can the man who made magic with Orianna and Zed in 2013 show the less-than-stellar field how it’s done? When KT Bullets attended IEM Katowice in March they were in a heavy slump domestically, but won the event without a loss and all performed to a high level.

ROCCAT do not come to the event with their confirmed final line-up for next year, but they have received some pre-tournament hype in terms of players saying they have been strong in practice. VandeR was an impressive performer with a one-dimensional AD Carry (Celaver) previously. Now he gets an upgrade in the form of Woolite and will be expected to form a strong botlane with the newcomer.

Jankos is the best European Jungler, for my money, and should be able to do a lot for Ryu and Overpow, with his ability to consistently get the lanes going early. Overpow is famed for his ability to figure out new picks and unusual match-ups, so perhaps he can transition that talent to the Top lane and become the next sOAZ, at least in that respect.

All in all, of the teams in attendance, ROCCAT looks the most solid and with the most coherent sense about what level they should be performing at. The title of this story-line is a little dramatic, since it would not be ridiculous for them to fail to take the title, but of all the names here, they seemed to have everything in place to finish the event with the trophy.

3. Doublelift’s chance to win a LAN

A disappointing piece of trivia about Doublelift’s career is that despite being a world class performer at times over his time spent playing and forming strong botlanes domestically, he has never won an offline tournament. In the modern era, with less opportunities to take a single title, this IEM, with its mixture of new line-ups and teams with stand-ins, provides the American ADC with an ideal opportunity to snatch his first finish at the top of the podium.

Add into the equation that Woolite has only a single LCS split of experience under his belt, P1noy has never played in the LCS and Core JJ is essentially unknown to the West, and Doublelift should be by far the best at his position in Cologne. If there were ever a time to dominate and hard carry CLG to the crown, this should be it. Admittedly, CLG arrive with a stand-in of their own, but the field itself is shaky enough that isn’t enough to write CLG off entirely.  This is very much a ‘put up or shut up’ LAN for Doublelift.

4. Gambit’s underwhelming line-up get an opportunity to shine

Looking at Gambit Gaming’s line-up immediately reminds one of the depressing situation they find themselves in now. Good enough to be an LCS team, but seemingly a million miles from ever being a legitimate threat to win the title. In LCS, little is expected from Gambit, but here in Cologne they have one of the few line-ups who are entirely intact and have been playing together for more than a week or two.

Placed on the Dignitas side of the bracket, it’s tough to know if Gambit can reach the final, but they will be given an unusual opportunity to prove that the new line-up is capable of any level of quality League play.

Doublelift was once a contender for best AD Carry in the world, while Woolite was barely known prior to replacing FORG1VEN in Copenhagen Wolves for the Summer split of 2014. The young Polish ADC did have some good games and generally has been thought of well, but Doublelift’s impact on CLG during the same time span was significantly more pronounced and important.

For a player who has always been defined by his big ego and taking match-ups personally, Doublelift will be harshly ridiculed if Woolite gets the better of him at this IEM. A common criticism of the CLG man is that he has only competed domestically for the vast majority of the last two years, so performing well at this IEM would help shift some of the notion that he has only looked strong by beating up NA AD Carries.

Woolite has never been considered the best in Europe, so he should be chum in the waters if Doublelift is the shark his fans still imagine him to be.

Jankos is the current Jungle master in Europe, performing incredibly over the two LCS splits of 2014 despite having nowhere close to the best solo laners in his team. Diamondprox was the original god of the jungle, reigning supreme right up until the beginning of 2014, when his position as a world class Jungler began to erode.

If Gambit can reach the final of this IEM event, overcoming Dignitas, then the old king of the European jungle might get the chance to face the new, as Diamondprox could be pit against Jankos in a Bo5 final. A quality I’ve always admired in Diamondprox was that he actively encouraged the comparison between Junglers, embracing battles against the likes of inSec and DanDy, so one can hope he would take such a final as a personal battle to show himself still relevant, against one of Europe’s elite players.

One of the only teams to arrive in Cologne with their full line-up is the new Dignitas side. The off season was a rather peculiar one for Dignitas, as they lost their coach (scarra), their long-time ADC (Imaqtpie) and their new star Top laner (ZionSpartan). The pieces they retained were star Jungler Crumbzz, passive but strong Mid Shiphtur and underwhelming Support Kiwikid.

Joining the three returning players are two Koreans, Gamsu is a former OGN Champions player and later Samsung Galaxy Blue substitute and Core JJ likewise played on a lesser OGN team. These are nowhere close to star quality names, so Dignitas will very much be playing the “potential” card which has so often been CLG’s approach to allaying concerns over a new line-up.

With an amateur team and Gambit standing between them and the final, this Dignitas team should at worst finish top two in Cologne if they are to be at all threatening as a top NA LCS team next split. Dignitas looked to have won the off-season after the Spring split, acquiring ZionSpartan and Shiphtur, but these changes have many more question marks hanging over the line-up’s heads and are far from a sure thing to succeed.

Link has always been touted as one of the unrealised talents of the NA LoL scene. Back in S2, he had the Pobelter asterisk next to his name, saying that if he didn’t have school and could commit full-time then he would be a great player. In S3 it was other members in the team, often those who had undergone role-swaps, who took much of the flack for CLG’s poor play-off performances.

In 2014, Link’s play was a core component of CLG’s improved Spring split run, nearly making the final. The Summer split was a disappointment, though, as Link’s play fell off as the split wore on and CLG plummeted from contenders to having to requalify for the League entirely.

One constant of Link’s time in CLG has been that he has been seemingly broken in play-off situations by the pressure of the moment and expectations. Where in the regular portion of the split he will summon numerous good games and high level performances on a wide variety of champions, in the play-offs he suddenly finds himself without true comfort champions he can reliably deliver a top level match performance on.

In Cologne, Link does not face the toughest of Mid lane fields, with Ryu in his own slump, Shiphtur needing to battle through the other side of the bracket and niQ never considered a top player in his own region. If Link can be steady, impactful and skilled, then he can start to turn around a legacy which has seen many of the CLG fanbase faithful turn on him during the off-season. The Mid laner clearly has talent, but talent doesn’t count for much if you can never manifest it when it matters.