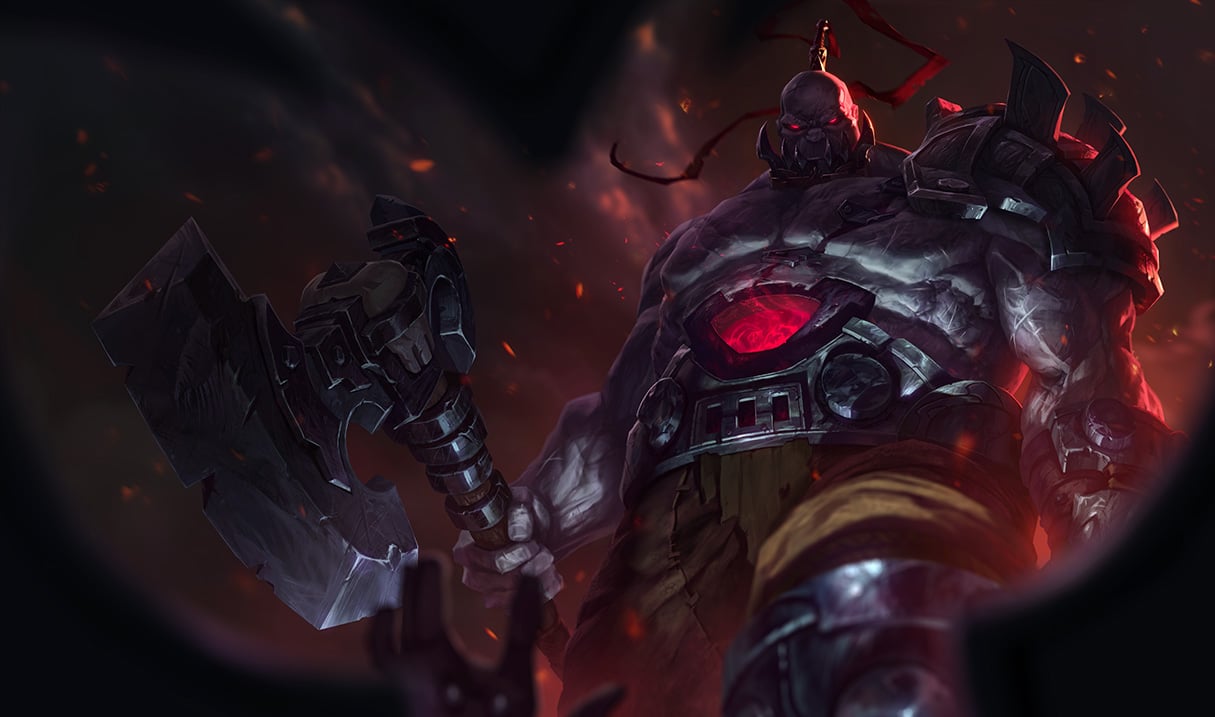 The Ups and Downs of Sion in the LCS.

Sion has been seen across all regions he starts strong usually coming out ahead of his opponent but his ability to use these leads to help his team win isn’t working out, pulling in just four wins out of fourteen picks across Korea, NA, and EU. Sion starts as one of the strongest laners but counter to his infinite scaling HP seems to crumble late into the game.

Sion brings to the table many qualities that an LCS team would want in the top lane, Strong laning, multiple crowd control abilities, and an insane tank for the late game.

If you are unfamiliar with the workings of Sion’s abilities you can go check them out.

Sion’s passive gives him a large advantage right from the start. Sion is able to gain level two from a jungle camp and teleport back to lane with extra health potions for more lane domination.

E, Roar of the Slayer:

Sion’s E is his trading tool, it allows distant last hitting in tough lanes or 2v1. It sets up for a Q combo and auto attacks.

Wave clear and CC combo off of an E or R is where this skill shines. Eventually it has a low cooldown for consistent zoning and CC.

Sion’s W is the Infinite tank, late game he will become nearly unkillable and a massive tower diving threat. This also adds more wave clear and counter trading from the shield and damage.

This pseudo global make him very mobile allowing him to move around the map or escape ganks. It can be used to initiate fights or in the middle of a fight for extra CC. This is the escape he needs while split pushing or getting ganked.

Even with all of these amazing abilities Sion’s package comes with some massive weaknesses, but these only start to show up later in the game and usually only against high level opponents like you would see in the LCS or LCK.

The largest weakness Sion has is telegraphing abilities. This is particularly a problem with his two best CC abilities, his ultimate and his Q. Both of these abilities telegraph almost exactly where they are going to be landed usually allowing a solid second before they will go down. In professional games, late game team fights become an issue when anyone you would want to be locking down with CC will usually have a movement skill, a support who can boost their run speed, a tank to walk in front of his ultimate, an interrupt for his Q, or at the very least flash. Because of this Sion’s abilities will need a setup with other CC or be completely wasted. The setup that is required, Sion does not bring to the table. Compared to Maokai or Lissandra who both have targeted abilities to open on the hard to lock down champions.

Even his W and passive are telegraphed hard, his W is harder to deal with due to the range of the explosion but the time is there to counter it if needed. Leaving only his E where the opponent really has to predict it to dodge it. His E is crippled by a long cooldown, while 8 seconds on his E does not seem very long it pales in comparison to some similar champion abilities such as Dr. Mundo’s 4 second Infected Cleaver or Maokai’s 6 second Arcane Smash. Most tanks have a proximity threat Maokai’s ultimate/Q, Gnar’s ultimate stun, Dr. Mundo’s Burning Agony, Sion’s W cannot fill in this threat as he needs it for a defensive ability more than the mediocre damage. Overall his abilities make his threat level to be almost insignificant.

The other issue with Sion is he can’t auto attack well. Sion has no movement skills, he has no auto attack steroids, he needs to land skills that are hard to land, his E has the armor reduction but he won’t be in melee range to make effective use of it. This is really the last straw that makes him useless in late game. You will commonly see Sion in team fights only able to land an E and maybe an ultimate, lower mobility targets like supports will get hit by his Q but for the most part his impact is generally low. These problems are made worse from the fact that slows, movement speed boosts, and dashes are all common or required in the meta. With major picks like Sivir, Jarvan IV, Lulu, Thresh, and Janna in almost every game, Sion has major issues doing anything in team fights.

With the top lane meta very diverse currently, you have mages, melee carries, tanks and Gnar to pick from. The situations when you need a tank and both Gnar and Maokai are not options should be very rare. Most of the damage first top laners like Irelia or Jax will usually end up quite tanky later in the game and are always options if you need them. Renekton still is significantly better, with a stun, armor shed and proximity threat on his ultimate he cannot be ignored. Even if you just want Sion to stand in the way of skill shots Dr. Mundo with his insane health regeneration will be more effective. In any case when there is a team that might need a Sion there is usually a better option out there. To really justify a Sion pick you will need to have other tanks banned or picked, and have another form of hard engage already on your team.

In the NA LCS we have had two Sion victories recently there games he was picked by one of the two number one teams. He is also been played by Duke and Ssumday in Korea putting up mixed results from these currently bottom teams. Trying to convince you that Sion isn’t an optimal pick for the LCS we need to talk about these games. His strong point is in the tower pressure and split pushing which only help when his team has a lead, this is what makes him if anything look effective in these games.

I think the Sion here was a mistake, picking him into Lulu and Janna who both can slow him and increase the speed of their teammates would really put pressure on him to do anything in a teamfight. In game Aphromoo’s Blitzcrank carried hard, but we did get to see a good mid team fight Sion ultimate. This was used as follow up to a perfect Cassiopeia ult on the two TIP carries. This ultimate was probably the best use of Sion, his team fight before and even after this was pretty lackluster and his overall impact on this game was insignificant having the least amount of combined assists and kills on his team. CLG did not even use his passive start, I feel like almost any other top laner in ZionSpartan’s hands would have done so much more.

To make this picture really clear, we have the perfect match, Cloud9 vs Gravity in week one. In the Cloud9 vs Gravity match, Balls was able to get a major lead in kills and CS while playing Sion, a 100 CS advantage and 2 kills by 20 minutes. Cloud9 took advantage of this pushing down turrets, having an almost constant turret lead against Gravity. But the Dragons and the kills this game tells the real story, Balls unable to assists in protecting Sneaky was more or less useless. C9 could not contest dragons or fight in the open field. In a 25 min team fight the whole of Gravity engaged in targeting Sneaky, then while the fight was being kited back by C9, the fed Balls was in the back line of Gravity simply being ignored. He managed to pull off a kill on Keane’s Zed coming back with no cooldowns and HP after assassinating Hai and Sneaky. This game C9 had a fed Sion and a strong Kog’Maw by 20 minutes, but with Sion offering nothing for Kog’Maw protection or back line threat to Gravity the game started to spiral out of control with aggressive engages and smart targeting (ignoring Sion) by Gravity.

The Sion win Duke had at the start of the LCK tells a similar story as the CLG Sion. Although the game was much slower Sion’s participation was not key. Najin gained a 5k gold lead without a single kill going down. Even in the first team fight Sion starts it with an ultimate into a wall, this might have baited Arrow’s flash but it could have been a mistake trying to get away from Jarvan IV also in range, who immediately followed up Arrow with the flash and Jarvan IV ultimate and then Ahri came in to clean up the fight. Sion here was a split push threat while the rest of the team fought, eventually having Ohq reach hyper carry status on Tristana. Sion did appear to have some success in team fights but a lot of that had to do with Kog’Maw being the ADC, and most of KT’s resources were spent trying to stop Jarvan and Ahri not Sion. Once again Sion had the lowest kill participation being carried through the game with a well fed hypercarry.

In this loss Duke has really good team fights for Sion, he engages on Pray’s Corki with a Sion ultimate and an E follow up. But Pray ignores Sion, only using Valkyrie to escape Ggoong’s Kassadin. GE Tigers eventually only attacking and killing Sion once everyone else was dead or pushed out of the fight. There was a massive turnaround fight by Najin later in the game also, but it was perfect play from Cain’s Nami hitting a bubble into Ultimate combo to lock Kuro under the turret and allow Ggoong’s Kassadin to follow up with the kill. Ohq was being protected by the turret, and Watch followed up on Pray later in the fight securing their win. Sion’s impact was very minimal once again.

Sion can more or less put a team into a 4v5. There are several good examples of Sion’s complete ineffectiveness one particular one was Quas’s 2v1 in TL vs CST this past weekend. With no movement boosting buffs Quas was able to more or less walk around Sion, kill Jarvan IV, and get out. Quas even flashed at about 10% HP into melee range of Sion to get the kill on Jarvan IV because there is no threat. Quas made this 2v1 look like a 1v1 that Jarvan IV would have never wanted to be in. Quas being an exceptional player makes my whole point, against the best, this champion has the holes that can be exploited to the point of making him useless.

(33 minutes into the video)

All said and done:

When it comes down to it, the telegraphing of non-targeted abilities that make up Sion’s kit  allows plenty of time for the best League of legends players to move around and virtually ignore this champion. Because of this Sion becomes a large mass of dead weight that’s only used to throw in front of a tower.