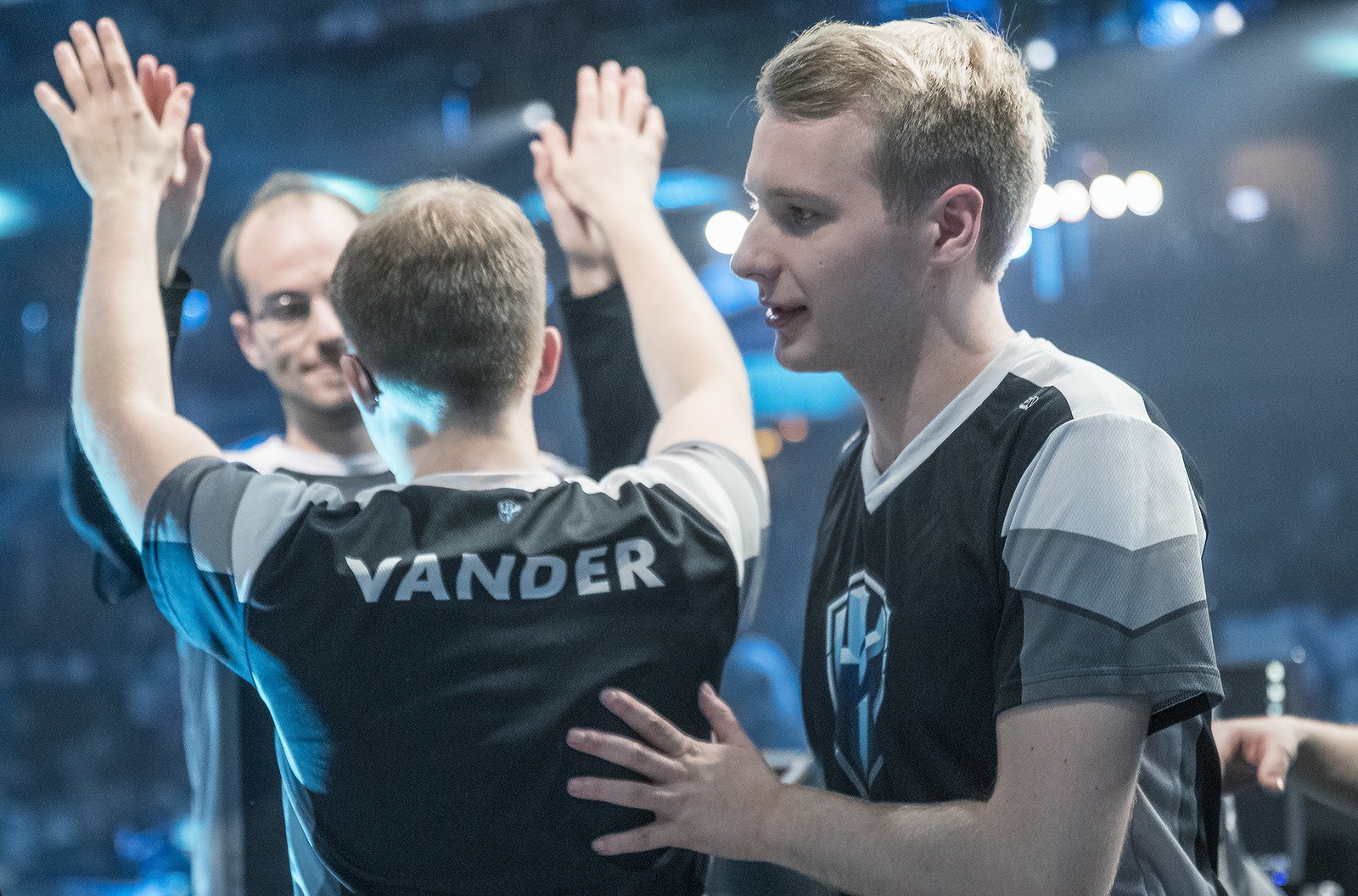 As H2k Gaming look set to face Samsung Galaxy in the semi-final of the World Championship, much discussion surrounding their run has been of the easier path they have had laid before them than other teams, past or present. Certainly, H2k have benefited from some hardly trivial factors, such as not facing a Korean team and the collapse of EDG, but if one is to critique their path to a top four finish in this manner than one must likewise be willing to honestly contrast it against past play-offs campaigns from Western teams at the World Championship.

The group which confuses many

TSM’s last Worlds play-off run, at the Season 4 World Championship, saw them emerging from their group in second place and running right into the best team in the tournament (SSW), eventual champions and thus an immediate and unconvincing elimination. TSM’s Jungler has argued that he felt they should or could have topped their group and gotten the easier side of the bracket. Many European fans point to SK Gaming lacking star Jungler Svenskeren for half of the group stage, due to behaviour-related suspension, as a damning factor against TSM’s likelihood of topping the group.

Where many seem to get confused in analysing this group and thus being able to contrast it against groups in the rest of the tournament or other years is that practically nobody seems to do so from the perspective of how the tournament was seeded, as opposed to the relative qualitative strength the teams are judged to be at.

The key context of that infamous Group B, before the minutiae of the games are addressed, is that TSM were the top seed of their group. The group is immediately one of the weaker groups in the competition, with C and D far out-stripping it in terms of parity and dangerous teams, by virtue of this group containing no Korean team. SHRC or TPA could both have been SSW, the eventual champions of the tournament, or NJWS, who made the play-offs from Group D and beat C9 twice, in three games, and Alliance once. TPA were one of the weakest teams in all of pool 2 TSM were not only the first seed, ensuring they had to face no first seed from a major region, but also dodged any Korean teams.

SK Gaming were arguably the hardest team TSM could have drawn from pool 3, but the exclusion of Svenskeren from a game against each of the three other teams meant that SK’s chances of progressing from the group were significantly hindered.

TSM went 1:1 in games against SHRC, beat SK only in the match where Svenskeren did not play and beat TPA in both matches. As such, they ended up meeting SSW in the quarter-final, as opposed to EDG and the easier side of the bracket.

H2k’s group from the pool perspective

To contrast with TSM’s group, H2k were seeded into pool 2 and thus drew a pool 1 team (EDG) and one which many were touting as a top three favourite for the title. ahq were one of the worse pool 2 teams, without a doubt, but the likes of IMAY and CLG makes it hardly definitive prior to the tournament as to just how weak the Taiwanese side were in contrast to the field. INTZ are a wildcard team and arguably the second worst of the pool 3 teams coming into the tournament, being as nobody had expected anything of ANX.

H2k went 2:1 in games against EDG, winning a tie-breaker against them at the end; 1:1 against ahq and beat INTZ both times they played. As such, H2k topped the group and earned a second seed match-up for the quarter-final, which ended up being ANX and thus H2k moved on to the semi-finals of the competition.

When arguing about the strength of the two groups, one must consider the seeding of the teams, since that sets up the context of how well one is expected to do and, to some degree, how difficult the challenge of progressing is. SHRC ended up being a team possessed, but came into the competition without a lot of fanfare. Of course, we can now see that they were a better team than H2k or ahq, the pool 2 teams of H2k’s group, but the fact H2k themselves are one of those teams makes that aspect not as relevant. SHRC are stronger than this year’s ahq, but TSM in S4 were weaker than this year’s EDG, coming into the tournament and after having seen the matches play out. So H2k got a harder pool 1 team and TSM a harder pool 2 team.

TPA were a weaker team in Season 4 than ahq in Season 6, but that could certainly at least be debated. At the end of the group, TPA had won only a single game, against a Sven-less SK, and essentially gifted TSM two of their wins. ahq, on the other hand, took a win from H2k and beat the pool 3 team (INTZ) twice, to score three wins total. ahq proved to be a harder second pool 2 team than TSM’s TPA.

The pool 3 team for TSM’s group is much harder, being as wildcard teams have typically shown very little outside of truly shocking upsets at Worlds. Even after INTZ beat out EDG, SK look to be the better team and showed it with their wins over TPA and TSM. Still, a wildcard team beating EDG, a tournament favourite, is a better single game result than any win SK got in that group of TSM’s. The point here is that there are many factors which go in favour of TSM and H2k, so it’s not as clear cut as one group being stronger or the extent that it’s without debate.

Also, consider that H2k being seeded in pool 2 and getting EDG, considered the best non-Korean team coming into the competition and a top four seed, in contrast to TSM’s own pool 1 seed at S4WC, essentially suggests that if TSM and H2k were as good as their seeds reflected then H2k should have gotten out of their group in second and TSM should have gotten out in first place. Had that happened, then H2k would have played ROX and been very unlikely to reach the semi-finals, while TSM would have gotten that EDG match-up their Jungler wanted and at least had a shot at a top four finish.

Instead, TSM lost to SHRC and then in the one time they faced a Svenskeren-empowered SK, thus finishing the group in second place. H2k, on the other hand, won two out of three games against one of the tournament favourites and earned their top spot in the group. A case could well be made that H2k’s group was harder than TSM’s, coming in, and yet H2k finished higher in it than TSM in theirs.

A history of easier paths

A primary factor in H2k’s run which seems to be ignored in so many past deep runs of Western teams is that no Western team has ever beaten a Korean team in a Worlds play-off series. Thus, every Western team who ever made it as far as the semi-final in some sense got an easier path than they possibly could have, if they had drawn a Korean team.

M5 were a favourite for the Season 2 World Championship, but played iG, China’s second seed, in the quarter-final and then fell to TPA in the semi-final, seeing no Korean competition at all. CLG.EU lost to NJ SWD, Korea’s second seed, in the group stage; beat World Elite in the quarter-finals, who were playing their first international tournament with ClearLove and Fzzf; and eventually lost out to Frost in the semi-finals, with Frost being the top Korean seed.

At the Season 3 World Championship, FNATIC were the lone Western team breaking the top four. They were the top seed from Europe and lucked in a group where they avoided OMG and SKT, the second seed from China and the third from Korea, respectively. The most dangerous team in FNATIC’s group were Samsung Ozone, the second seed from Korea. Ozone came in with a brand new player, as Top laner Looper replaced Homme, whom they had achieved their placings with over the year, and the new management situation of Samsung acquiring the team from MVP upset the usual practice regime the squad had enjoyed previously. Ozone lost not only both games to FNATIC, but two out of three against a Gambit featuring Voidle. FNATIC then drew one of the two easiest quarter-finals, getting NA’s internationally inexperience Cloud9, as opposed to Korea’s NJBS or China’s Royal Club. The aforementioned Royal Club would eliminate FNATIC 3:1 in the semi-final.

Season 5 heralded two European teams in the top four, hearkening back to the results of Season 2. OG came from pool 3 and got one of the toughest groups in the competition, but emerged in second and lucked out by getting Flash Wolves as their quarter-finals opponent, with the LMS team having beaten KOO to earn a first place seed. After beating them, xPeke and company had to face SKT, the eventual champions and the horrifying beat-down which was due them in such a mismatch.

FNATIC were the best hope for the West and their group looked fine enough, but slips against ahq and C9 in the first round robin put that in question. FNATIC stormed to 3:0 the second round robin phase and top the group. Getting EDG, who had been shaky in the group stage and almost lost a game to a wildcard team, FNATIC swept past the Chinese team. Had all second place teams been available, then OG might have been an easier opponent on paper, ignoring regional match-ups, but KOO would clearly have been a harder opponent a round earlier and could have ended FNATIC’s run in the quarter-final. The Tigers would indeed kill FNATIC when they met, as a 3:0 sweep in the semi-final saw FNATIC’s run halted.

Not only has avoiding Korean teams in the play-off bracket been a permanent pattern for Western teams which go beyond the quarter-final at Worlds, but a less well observed pattern exists that no Western team which has ever drawn an eventual finalist Korean team in their group has ever even progressed past said group stage and into the bracket play phase of the competition. Lemondogs and TSM could not make it out of Group A in S3; H2k died out in Group C of S5, as did CLG in Group A; and Season 6 has yet to be determined yet, but TSM and CLG could yet be added to that list of victims.

H2k’s path is not purely a result of their own group draw, but also the results of the other group. As far as internal results go, H2k would have been facing near certain elimination had they not earned the top spot. Even with that top spot, they could have faced CLG, had the NA side won another game against ANX and triumphed in a tie-breaker. The European side has benefited from a little luck in the group draw, not facing SSG or SKT, for example, but they have also performed well relative to their seeding and benefited from a similar group draw and pattern of opponents as practically every past Western team which has made it as far as the EU side.

Consider this: would the Cloud9 who lost to FNATIC at S3WC have taken a game from SKT at that competition? ANX, the team H2k faced in the quarter-final, beat ROX, who were the Summer champions of the Korean league, as SKT were in S3. Of course, the seeding system is different for Korea, but the name value of teams alone does not denote their strength any more in competitive League of Legends.