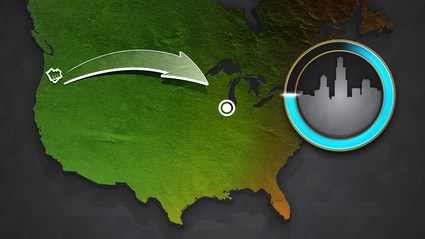 Throughout League of Legends eSports history, much has been said about North America’s lack of talent and inability to produce high-quality, home-grown professional League of Legends players. The most common explanation has been that North America lagged in structural and organization systems for competitive eSports relative to South Korea, which has a long tradition and history of eSports. Other reasons have included a lack of dedication, cultural differences, play-style, etc.

On the eve of the hotly debated and wildly anticipated migration of the North American servers from Portland, Oregon to Chicago, Illinois, many have argued how the new server location will affect not only North American solo queue but the professional scene as well.

Riot has cited that its primary reason to migrate the current servers to Chicago, a more central location in the continent, is to provide “the vast majority of NA players under 80 ms ping. Currently, more than 50% of NA players actually fall above that threshold.”

There were 79 participants who played at least one match in either the Season 5 Spring or Summer regular season of the NA LCS. Below is a chart of the region that Season 5 NA LCS players are originally from.

Although North America has a player base of over 1 million players, NA LCS teams have continually imported international players into the competitive scene. In Season 5, over one-third of the NA LCS player base consists of international players, and the most common explanation for the high number of imports is the “lack of talent” in North America.

What is most alarming is that of the North American-based players with available data of their hometowns, a total of 10 East Coast natives represent the NA LCS player population. Even though roughly half the entire continent’s population is in the Eastern time zone, the East Coast accounts for just 23% of the NA LCS.

Instead of following the expected population distribution, the NA LCS player base is extremely imbalanced. Eastern and Central North American players are severely underrepresented in professional League of Legends while the West Coast is prominently featured.

The under-representation of Eastern and Central players in the NA LCS is directly correlated with Riot’s server location and the resulting ping from its servers.

While the West Coast benefits by having minimal latency from the current server location in Portland, the Central time zone experiences latency around 40-80 ms while the East Coast receives 80-150+ ms.

Season 3 World Champion and SKT T1 midlaner Faker is famous for saying that 40 ping is unplayable. Of course, Faker is from South Korea, which well-known for its advanced technological infrastructure where players benefit from low ping that has been rumored to reach the single digits. NA LCS champion and CLG’s AD Carry Doublelift, who hails from southern California, has said on his stream that playing with 100 ping is “like playing under the influence.”

Yet in spite of this, half of the North American continent has played with at least 80 ping for the entire history of League of Legends.

The so-called “lack of talent” from North America is directly attributed to Riot’s decision to house its servers on the West Coast, which has handicapped more than half of the NA player base by providing less than ideal latency issues and in-game performance for those who reside in the Eastern and Central parts of the continent.

As a result, the highest level of competitive League of Legends in North America, the NA LCS, has more South Korean players (14) this season than East Coast players (10) this season. The state of California itself has produced more LCS players (17) than Eastern and Central NA combined (16).

Of course, ping and latency issues are not sole factor to reaching LCS. The likes of WildTurtle and Hai have proven that it is not impossible to overcome when the talent and skill is there, but when the West Coast produces more than half the North America’s professional LoL players, it is clear that the West Coast bias is staggering.

The upcoming server migration to Chicago is long overdue and should only help expand the pool of talent in North America. As the season progresses, expect a wave of new talent to rise from Eastern and Central North America through the solo queue ranks and eventually trickle up to LCS by the start of Season 6.

The data compiled for this post can be found here. The data includes every player who played at least one NA LCS match in Season 5. The regions were divided based on time zones to get an idea between east coast versus west coast split. Only Crumbz was from the Mountain time zone, so based on Calgary’s proximity to Portland, I grouped it with Pacific.

Hometown information was gathered from public profiles or biographies. The “hometown” for each player was based on where the player would have played/practiced League of Legends prior to his professional career, which is not necessarily where he was born or his nationality. For example, Xmithie was born and raised in the Philippines but moved to California when he was 16, so his hometown is listed as California and not the Philippines.

There are 7 North American players that I could not find for whom I could not his hometown in my research. I was still able to draw a strong correlation and conclusion without this data, but feel free to let me know if you have the information so I can update it.