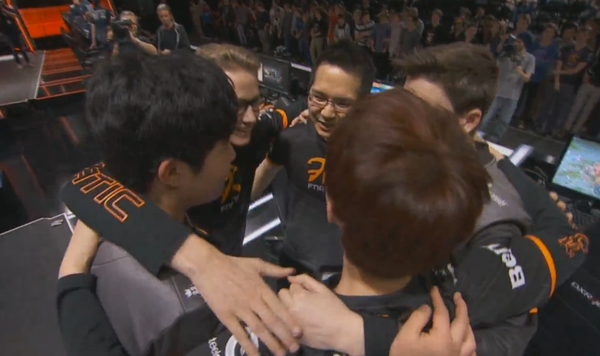 Spring Split – one of the teams with the highest expectations was Elements, but what happened was unexpected, they ended the Split without even being in Playoffs. Many Fans were disappointed. But not only the Fans, also Martin Larsson, former adc from Elements wasnt satisfied with his decision of leaving Fnatic, so he decided to move back. The Spring Split result was also a reason for Elements to change their roster completely except Mid-Laner Froggen.

The first week performance of Rekkles in Fnatic

That Rekkles is a better performer than Steelback and also fits better to Fnatic was clear from the beginning, Martin Larsson got more experience in the Pro-Scene and he is also the one with the better positioning. Many people looked forward to see him playing with Fnatic again. His critics put him under alot of pressure due to their constant negative feedback.

In the first game against Unicorns of Love he managed to perform very well. Fnatic played agressive and Rekkles tried to adapt to this playstyle. For example the first blood situation, where it was a 4vs3 in advantage of Fnatic, and all three members of Uol died. Rekkles got a double kill for himself. The agrresive playstyle of Huni, Reignover and Yellowstar fits good with Rekkles. Elements playstyle was completely different compared to the Spring Split and it turned out to be effective. But the new roster with Rekkles also showed some weaknesses, which was noticeable in the fight down the bottomside. Rekkles, who is used to farm a lot, was late to the fight. Fortunately for Fnatic it was only two for two. The game finished in favour of Fnatic with an perfect ultimate from Huni to close out the game. Rekkles ended the game with a kda of 7/0/3.

The game on friday against SK Gaming turned out to be more difficult for Fnatic. The early game was crucial since Fnatic gave up early kills to SK and they didnt have enough map control. CandyPanda’s Kalista was a major problem for Fnatic. Rekkles picked Ashe once again, but this time he looked more comfortable with her: His ults were on point and he managed to have an higher impact on the game. Febivens Ult on Cassiopeia was definitely one of the game changing moments, even though it wasnt an ace for Fnatic, they managed to turn the game around at this point. In the End Fnatic Fnatic won the game due to a better team comp. But as they said themselves they know that they still have to improve.

Rekkles start in the summer split wasn’t perfect. The League of Legends community critizises him, because he is not the game changing factor in fnatic. But still, he showed potential and we are sure that he is going to step up and be the hyper carry he is known for.

The Comeback of Elements?

Elements showed a good performance with their new line-up against Gambit in game one. Until the first blood, Gambit was ahead in all three lanes and even after first blood the gold amount was almost equal. Elements tried to keep the game passive, like their games in the Spring Split, but the teamfight on the top side in minute 18 was definitely in the favour of Elements. Gambits bad positioning caused a crucial ace for Elements. From that point on, they started to be more agressive, because they just had the better team comb for teamfighting. Gambit picked Tanks, like Gnar, but not the gold to build tanky enough. After the baron steal from dexter, the game was pretty one-sided. Diamond was an easy target for the tanks to engage on and Gambit lacked disengage. At the end it was a really good start for Elements, also for the new player PromisQ, who had his first game in the LCS. The new roster looked great.

This positive impressions of elements changed in the game against UOL. After the game, dexter postet on Twitter that they played too passive and the community agreed. It felt like watching the old Elements playing only with less deaths. All lanes didn´t show any pressure at all or they even got pressured. They had a few good moments, but it just wasn´t enough to build up an advantage over Unicorns of love. Eventually Elements got outpressured and lost the game. But the Twitter Post shows that they are aware of their problem and hopefully Elements is able to change something in the next weeks. Because the roster definitely showed some potentional