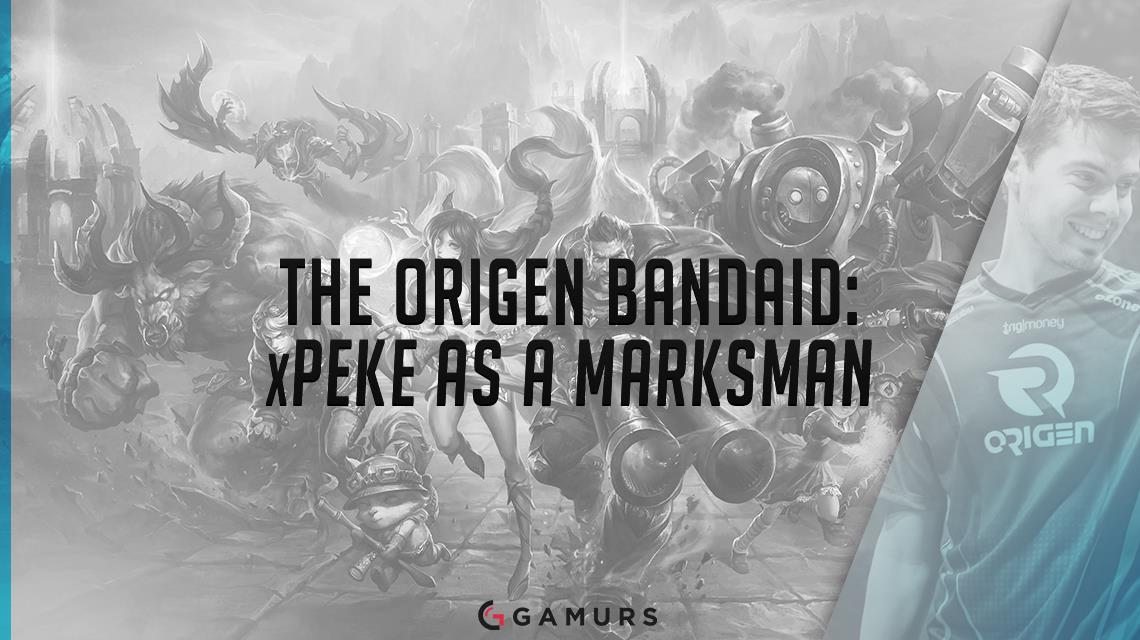 “If anyone drops a game to xPeke ADC, I’m eating my shoes.”

That was a poor bet to take.

Fans and analysts are scrutinizing the European League Championship Series this split, more than in recent memory. Consistency is a scarcity: The switch to the best of two format has resulted in an abundance of ties between teams at the top and bottom of the standings. Some rosters, like H2K, are underperforming relative to expectations.

Dragged into the middle is Enrique “xPeke” Cedeño Martínez. The owner and founder of Origen was forced to substitute in as AD carry after Konstantinos “FORG1VEN” Tzortziou-Napoleon abrupt departure. The narrative of xPeke intervening as a player–while still an owner–to save his team entwined with losing two prominent talents, Jesper “Zven” Svenningsen and FORG1VEN. The result, we expected, was an implosion akin to watching a captain sink with his ship.

Instead, the proverbial foot, complete with Nike’s, is in my mouth.

Far from the best team in Europe, Origen is, however, a tenacious leech. In 8th place, it has split games with Europe’s best. H2K. Fnatic. Even G2, the reigning champion with the strongest roster consisting of the best bot lane in Europe–which used to be Origen’s– could not sweep AD carry xPeke. Only Giants, currently in sixth, have managed that.

Some argue this as proof that Europe is weak–how else does one explain losing to the likes of a mispositioning, split-pushing, AD Carry xPeke?  Rather than write off the moderate success of xPeke’s role swap as the result of a subjective interpretation of a region, let’s explore what xPeke brings, both as a player and as an AD carry, why and how he’s helped, and the limitations.

Before we explore the gears, we have to understand the machine. Origen is a team that balances on the split push. It starts with Maurice “Amazing” Stückenschneider ganking for Paul “sOAZ” Boyer. With that advantage, sOAZ pressures a side lane while the rest of Origen group around Tristan “PowerOfEvil” Schrage to siege the mid or the other side lane. Typically, this results in Origen playing to the top side of the map, resulting in them having the highest Rift Herald control rate and first Baron rate. A byproduct is that they controls less dragons, and has low kill participation rates among all of its members; Amazing is the only member above 70 percent.

This does two things: first, it splits the enemy team across the map, making it difficult for a decisive teamfight to occur, which prolongs the end of the game. Second, it encourages the enemy to try and take Baron in order to end the split push. Whether the call is poorly prepared or Origen responds just in time, Origen usually wipes the enemy team and takes Baron for itself.

xPeke fits into this as a facilitator. Playing on Ashe, Sivir, or Lucian, he is rotated into the mid lane after the side towers go down to siege. Usually, Origen is the first to group like this. After chipping at the tower, xPeke will break off to catch a side wave. Sometimes he overextends. Sometimes Origen’s lower number of wards on the map lead him exposed. Sometimes it’s just hard to forget the habits learned from playing mid lane for years.

Those habits extend to teamfights. He’ll aggressively move in for a play that would make sense on the likes of Twisted Fate with Zhonyas, but results in a quick death as a two item Sivir. Mobile casters, like Lucian or Ezreal, alleviate this and allow him to kite around and deal respectable damage.

Despite his obvious positioning problems and Origen’s 24.6 percent investment of gold into him– right in the middle relative to other AD carries– he comes third in average damage to enemy champions per minute at 591: only Zven and Martin “Rekkles” Larsson are ahead of him. One could say xPeke makes a decent AD Carry, then, by pointing to his damage efficiency. However, one has to remind themselves that Ashe and Sivir’s AOE damage in teamfights through Runaan’s Hurricane procs and Ricochet respectively helps improve that statistic. Origen’s longer game times also assist: xPeke scales more, meaning he deals more damage, and while Origen takes longer to close, xPeke can moderately inflate his damage output with indecisive late game skirmishes.

“We have a better atmosphere when xPeke plays,” said sOAZ soon after xPeke started to play AD carry. “Even when Niels and Mithy were in the team, we would tend to talk more when xPeke was playing rather than Tristan (PowerofEvil).” An increase in com chatter, brought on by xPeke’s presence, can help coordinate split pushes. Given the penchant xPeke has for backdooring the enemy nexus, and with how Origen are currently playing, assuming that is what is going on is safe. It’s a dynamic impossible to measure with an instrument like statistics–only our eyes, watching Origen slowly constrict Fnatic render it visible.

Forced to play the hand it is dealt with, Origen and xPeke face the facts. xPeke isn’t about to reinvent his career with a role swap. He knows this. Origen know this. For now, they just need to survive until a replacement is found. It’s why Origen uses him as the engine of their siege. It’s why Origen avoids the critical teamfight by splitting the enemy across the map. It’s why Origen values xPeke’s chemsitry over his ability. It’s why Origen is able to tie with any team in Europe.

It’s why I need a new pair of shoes.

(All statistics collected from Oracle’s Elixir on July 5th.)