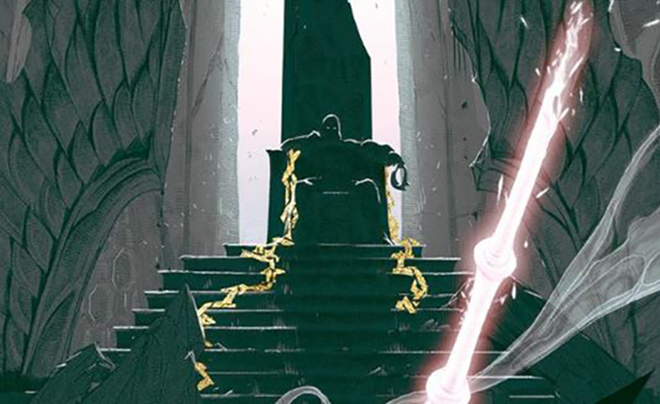 The new League of Legends champion may be closer than we all anticipated, with Riot seeming to have posted teasers for them on Universe, the game’s official lore platform.

The teasers are all set inside Demacia, and feature familiar imagery of the throne room, for anyone that has rifled through Demacia’s lore on Universe before. And, sitting atop what we assume is the throne, is a person wielding two long, golden chains similar to what can be seen in the original champion teaser in this summer’s Champion Roadmap blog post from Riot.

In fact, all we knew about the upcoming champion is that they’d be covered in chains or related to chains somehow, so the teaser featuring big chains seems pretty on point. Something else seems to have been revealed through the teasers, too, but it takes a minute to notice. Just because this person is sitting on the throne, that doesn’t mean they’ll be Demacian royalty. We actually think they’re the opposite—a Demacian criminal.

Why? Well, for starters, chains are often used as imagery associated with criminals, but that may be a little too on the nose. The real kicker is that this person appears to be chaining up several important Demacian heroes, like Lux, Garen, and maybe even Jarvan, although he isn’t actually seen, only his spear and Cataclysm are.

These heroes appear to be in some sort of distress or anguish, too, and since Jarvan is actual royalty, and Garen and Lux are both particularly close to royalty, we can assume this person is an enemy to the crown of Demacia. But since he doesn’t appear to be Noxian at all, the next logical guess is that he’s a criminal.

Of course, this is all one big guess, and we won’t know for sure until Riot says something official, which we hope will be soon.