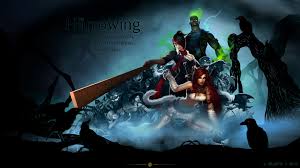 Most people know that League of Legends lore is widely considered pointless. You could climb from bronze V all the way to pro, win worlds five years straight and never have read one word. That being said, League of Legends lore is very deep, and actually is a starting point for almost everything in the game (champions, items, maps, character secondary quests, etc..) The goal of this series is to present the lore in an understandable manner, show you all the crazy shit that goes on in the league of legends world (a lot of it is pretty funny), and hopefully spark your interest for more lore. First up, The Harrowing.

The Harrowing is time of festive holiday that runs from the Oct. 18-31 (very similar to our Halloween, it marks the time of harvest.) Currently in Valoran (that’s the continent fyi) most people treat the harrowing like we do Halloween. People dress up in ridiculous/lavish outfits (kitty cat Katarina, lollipoppy, zombie ryze, etc…) and exchange sweets and other treats at big social events (kinda like a town fair.) Now here is the fucked up part. The culture has moved away from treating the harrowing as an event to be lived in fear (and morphed it into a time of celebration) but everyone still acknowledges the real horrors that occur every year. Imagine it like this, your celebrating halloween, but in the back of your mind you know somewhere people are being mercilessly slaughtered and their souls being dragged back to the Shadow Isles, messed up right? But that’s the way it is, every year people gear up for party time, but at the same time hoping they wont die horrible deaths and then have their souls locked in an eternity of unimaginable torture.

The Black Mist is the conduit for all the horrors that happen during the harrowing, it’s pretty much identical the “The Fog” if you ever saw the movies. Basically the black mist rolls out from the shadow isles, crosses over the ocean, and rolls to a certain location and unleashes total hell. According to the lore here are a list of atrocities the black mist has committed over the years:

It amazes me that no one tries anything to stop it. I understand that the average person has no magical powers, but there are plenty of champions with tons of magic and/or strength (champs in this world have celebrity like status.) The Summoners at the Institute of Justice are pretty much like “Sorry guys, we don’t know how to fight this but if you find something hit us up, so yeah, good luck.” There hasn’t been any knowledge of how to stop it other than if your unlucky enough to cross paths with it, you hope to the gods you can fend it off (if your some rural farmer somewhere, I’ll be honest, you’re fucked.) But people in the world just seem to turn a blind eye and hope it doesn’t happen to them. Sounds like a lot of things in real life right (oh riot.)

That’s pretty much it for lore that we have on The Harrowing (without stretching anything.) Like I stated before, it originates from the Shadow Isles, so more speculation could be made when I break it down, but there is plenty of potential for new lore and content to come from it (take Azir/Shurima for example.) Hope you enjoyed this, let me know what you think/places or factions you would like to know about.