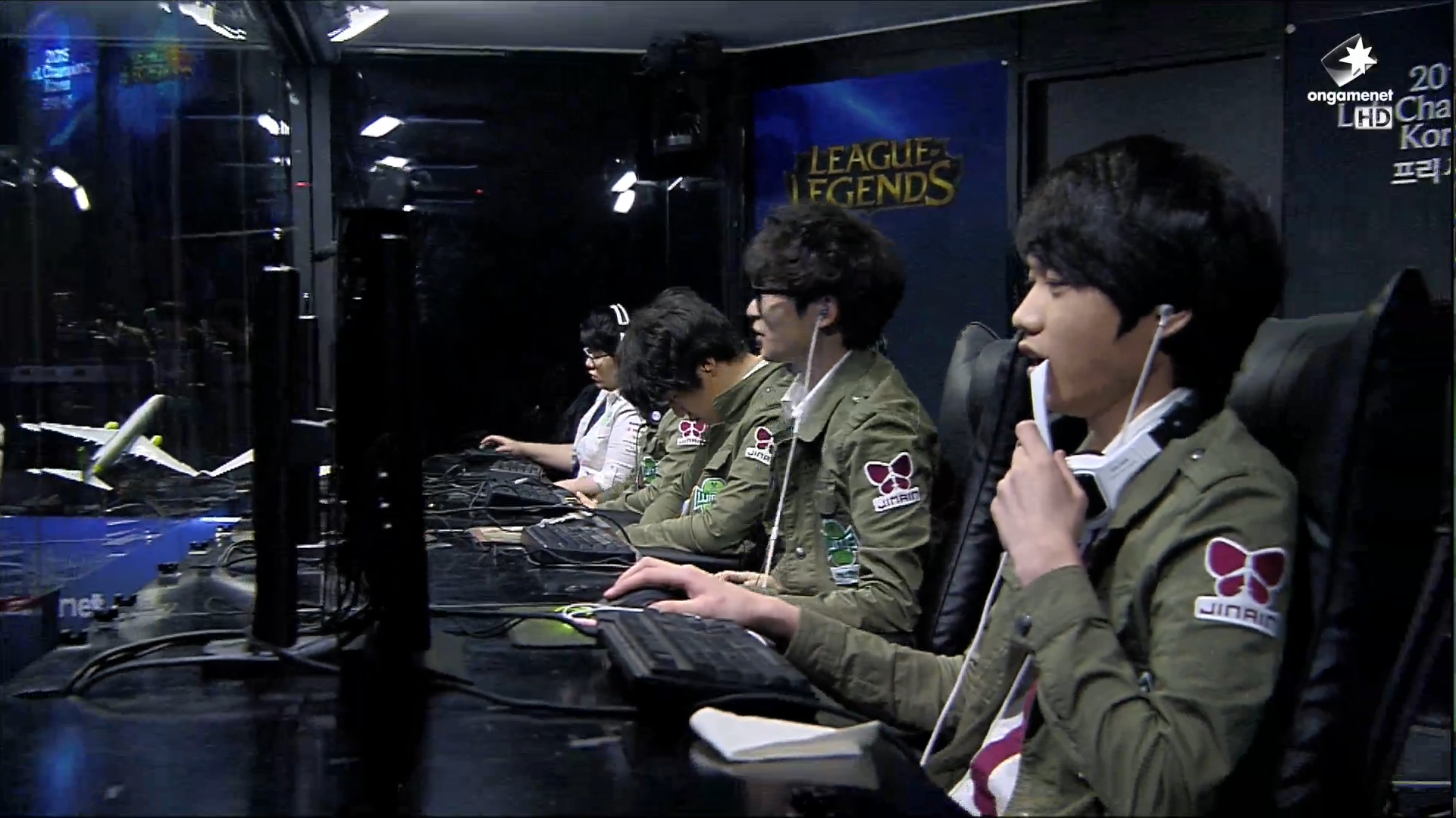 Jin Air has only been able to win 2 games, one series, a surprisingly terrible performance. This win was picked up Friday against CJ Entus who had switched out Madlife for Max and pulled Ambition out for Trick. It was a hard series for Jin Air to lose; it was a hard pre season to lose too. Max did not play poorly and did especially well being a rookie, and as Montecristo says, there already were too many Trick’s jungling. This was basically a free win, not to say there weren’t free wins already for Jin Air. I expected them and Najin e-m Fire to be the most sure teams to dominate because of their strong and least changed rosters. It is not certainly known why the Jin Air Green Wings have not fulfilled their expectations, but in this article, I will do my best to explore the topic.

For me, Trace has not done bad. He has a big champion pool, can bully his opponents out of lane, and does work in team fights. From looking back at his performance in Summer, he has improved quite a bit, and he has become a bit of an innovator in the top lane with some of his competition gone. Trace has also drawn bans with Sion, Lissandra, and others. On any champion he plays, even the boring super tank of Mundo, he keeps me watching. I see him as a rock for the team now and in the future because of his performance and being the only top laner.

Chaser and Winged have failed to perform in the jungle. They both have had zero map pressure, and in the CJ v.s. Jin Air match, Chaser got out jungled by a mid laner. Their performances have been unacceptable for people of their experience. These guys can’t seem to get leads or maintain them for their laners by ganking. Their mechanics and decision making are very weak. I can only speak of Chaser for past experience among the two junglers, but his skill has fallen off, a lot.

Ganked By Mom was clearly slumping, but there was no noticeable reason to be. He had four to five months to practice and get better since Summer, and he showed up to the Preseason as an even worse player. He was the greatest disappointment on the team but not necessarily the worst player. In the category of the worst, it is a competition between the junglers and supports. Getting rid of him is definitely not the right way to go about solving the problem. He has even shown that he can be a carry in some of the games, proving he isn’t so bad. GBM should be nurtured and trained by Jin Air. He was a good player in the Summer Season, and he will be an even better player in Spring.

The bottom lane has not looked entirely bad. Cpt Jack has performed well and so has Pilot. The ADC’s have been the only ones to fulfill the hype. Cpt Jack did as expected, and Pilot, he surpassed all expectations with a pentakill on Tristana a few days ago. The supports have either been non-factors or negative influences. When I watch some of their games, I see a lack of warding, play making, and decision making. The bot lanes have been 1v2’s basically. The supports just have to train up more. They have been playing quite bad lately, and maybe, it is just a matter of getting comfortable on the stage again.

I have not always a fan of the Jin Air organization. Previously, I disliked them. Coming into this season, I had a change of heart and took an interest in them. Hoping that they would do well, I was disheartened when they did not show up for the OGN Preseason. If there was the stronger talent pool of Season 4, switching out weak players would be an option, but Jin Air doesn’t have that luxury. There is always amateur talent, but I think that it is better to hold on to the slumping players and for the team’s management to foster change for the better. There of course is a time to let go of under performing players, but that time has not yet come for the Green Wings. Wait until the Spring Season to make up your mind on the Jin Air Green Wings. For the true fans, on a scale of 1-10, how depressed are you about Jin Air’s current performance?

If you are interested in further articles on Jin Air, check out the post made by Jennifer Kennedy.