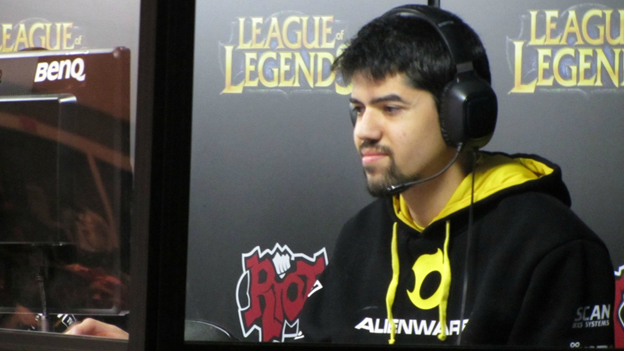 This last week, Dignitas fans were given a bombshell when Alberto “Crumbz” Rengifo had stepped down from his starting position as Jungler and Team Captain, ending a two year tenure as starter for Dignitas. At this emotional time a reflection on his career in League of Legends is appropriate, both to contextualize the gravity of his decision, and to explore options for his future pursuits.

Alberto, then 17, started to play League of Legends in August of 2010 and found he had talent for it. Within 7 months of starting, he was joining professional teams as a top laner in the young competitive scene. His first big performance was at IPL 3, where he was substituted in for mid lane on Epik Gamer when their starting mid laner, Salce, was unable to participate.

Crumbzz laned against the likes of Bigfatlp and Reginald, yet was able to progress with the backing of Dyrus and Dan Dinh to the final, where they lost to Scarra’s Dignitas 2-1. It’s impressive that, although the scene was young, Crumbz was able to stand against such reputable mid laners when we consider it was a role swap for him. As competitive as Crumbz is, he may have looked forward to challenging Dignitas again, but soon he wouldn’t have the option.

Crumbz’ second role swap would occur when he left Epik Gamer to join Curse as their jungler. Playing the likes of Shyvana and Nautilus, Crumbz served as a stable rock for his team. However, his early jungle career would be unimpressive; he participated at IEM Hanover and IPL 4 with Curse, but he did not advance to the semi-finals in either tournament.

The legacy of Crumbz as we know it today would fatefully begin in May of 2012, when Crumbz announced he was leaving Curse. At the time, teams were just starting to get gaming houses, Curse was doing so. Crumbz weighed his options—he could move in with them to commit entirely to professional League, which was nowhere big as it is now, or he could take a more conventional route of life and maintain his university studies while playing LoL on the side. Choosing the latter, he announced his decision in a forum post and wished the best of luck to his old team.

Crumbz’ decision proved historically vital to the formation of three teams’ identities, as roster swaps resulted from his decision. Saintvicious, then playing for CLG, would move over to Curse to fill in Crumbz’ absence. CLG would then take Voyboy from Dignitas for top lane while role-swapping their original top laner, Hotshotgg, to the jungle. With a position open, Dignitas recruited Crumbz for their top lane. Accepting the offer, Crumbz joined his long-term teammates Imaqtpie and Scarra, and the identity of Dignitas as recent LoL fans know was established.

Nowadays, role-swaps are visited with skepticism they usually fail to reinvigorate a player’s career. This was not the case for Crumbz.

At IPL 3, he was able to reach the finals as a mid-laner. Jungling with Curse, he didn’t reach as far. But as Dignitas’ top laner, Crumbz would make the first advancement of his competitive career since his leaving of Epik Gamer. At MLG Anaheim, Dignitas, featuring Crumbz in top, IWillDominate in the jungle, Scarra in mid, Imaqtpie as ADC and Patoy support, would take third overall, losing to eventual champions TSM in the semifinals winners bracket and then to CLG Prime. Crumbz’ top laning was strong, but it wasn’t capable of competing with the likes of Dyrus and Hotshotgg.

The next month, Dignitas would strike back, claiming first at Solomid Invitational 5 and then IPL Elites NA. Later at Season Two Regional Finals, Dignitas burned through the brackets undefeated until they lost 2-0 to TSM in the finals. Claiming $30,000 from the Regional and taking at least third place in every event they competed at, Crumbz’ career with Dignitas was secure, but not his position in top lane.

In Preseason 3, Crumbz would role-swap one final time when Dignitas suffered a major blow. On December 4, 2012, IWillDominate had his accounts permanently banned and was prohibited from competing in competitions for one year due to his toxic behavior. Dignitas utilized Crumbz’ flexibility and role swapped him to jungle, filling in their top lane with KiWiKiD. This was the beginning of Crumbz definitive professional career as a jungler.

2013 was the year competitive League of Legends as most North America fans understand it was born. With established organizations like TSM, CLG, and Dignitas competing for first place on a weekly basis, the scene would begin its build-up into the juggernaut it is today. Starting at the genesis of the LCS, NA organizations looked to cement their reputations and sponsorships while they fought to claim the title of “Champion.”

Crumbz was one of the best junglers in the Spring Split. While he had an average champion pool, he had the third highest KDA at 3.78, only behind Saintvicious’ and the Oddone’s 4 and 4.63 respectively. Crumbz’s best performances came on Xin Zhao and Vi, dropping only one game with each while winning several more. His style was a supportive style, laying down ganks to feed his team kills rather than claim them for himself—understandable when your teammates were as strong as Scarra, KiWiKiD, and Imaqtipie. When one discussed the best junglers in NA, Crumbz was a name which bore legitimacy.

Dignitas ended the regular season in third place behind TSM and Curse. Going into the playoffs, Dignitas were expected to beat Good Game University, but in an upset lost 1-2 to a GGU who would go on to the semi-final. Having lost in the quarterfinals, Dignitas were sent to relegation; an unexpected turn of events for Crumbz and the crew.

In the Summer Promotion Tournament, Dignitas’s fate in the LCS rode on one series against Team Summon. A best of 5, Dignitas took a quick game one win with Crumbz on Nocturne, but Team Summon adapted to pick up game two. In Game three, Crumbz changed his champion pick from Nocturne to Rammus, a champion he had not played in the prior LCS Split. Crumbz proceeded to dominate the game, using the move speed from KiWiKiD’s acceleration gates on Jayce and creative flash Powerballs to grind Team Summon down and claim a definitive victory for Dignitas.

After the Rammus game Crumbz returned to his Nocturne pick to close out the series, and Dignitas won their right for Summer Split. Crumbz, throughout the series, showed flexibility in play style on a single champion, using Nocturne to dive for picks and engage team fights using his ultimate, while subsequently peeling for Imaqtpie when necessary. Crumbz showed an awareness of what role his team needed him to play, which in turn demonstrated his mastery as a jungler.

What Goes Up Must Come Down

The Summer of 2013 was when Dignitas lost their status as a legitimate top four team in NA. Before the split, Crumbz was within the conversation of top four junglers in Na, but then the advent of Cloud 9 struck like thunder. Meteos dominated the jungle in unrivaled fashion and Vulcan’s Xmithie stepped up to compete. Dignitas would slip to a three way tie for 4th with CLG and Curse in the regular season. They would claim fourth for themselves when they beat Curse 2-1 in the playoffs, but were easily bested 2-0 by Cloud 9 in the Semi-finals and then Vulcan in the third place match. Still, they had avoided relegation.

The next year for Dignitas would be even more troublesome. In Spring they came in 4th during the regular season, but slipped to 5th in the playoffs. In Summer, they fell to 6th during the season, but made 5th in playoffs and avoided relegation. This happened after a strong 6-2 start in the first three weeks for the squad, where Crumbz’s jungle play was easily one of the strongest at the time. However, Crumbz fell through the year, with several experimental jungle picks like Pantheon, Kha’Zix (he wasn’t a jungler yet) and Kayle, failing to secure wins for Dignitas. Crumbz’ KDA would steadily decline through the splits, declining from his initial 3.78 to roughly 2.

Crumbz, however, was able to improve aspects of his game, such as his Lee-Sin play and his vision control, gaining a reputation for buying exuberant amounts of wards, but nothing he did would ever compare to the accomplishments of Meteos, nor be enough to reinvigorate Dignitas. This is likely due to his inability to maintain his highest level of play. He would start off splits looking invigorated, his play tight and decisive. Then into the split, he declined into what was perhaps his average level and be uninspiring at best or floundering at worst.

In 2014, the iconic Dignitas roster crumbled: Scarra left the mid-lane to Coach Dignitas after Spring split, with Shiptur filling in for him. Zionspartan would be picked up as top laner for the Summer split, so KiWiKid was role swapped to support. After the Summer, Imaqtpie would retire from professional play to stream full time and be replaced by Core JJ. Scarra would also leave Dignitas entirely, becoming the coach of CLG in the off-season before 2015.

With changes to the format and severe issues in game and out never being resolved, Dignitas started the 2015 LCS Spring split as perhaps the worst team in the LCS. Looking disorganized, Dignitas would go 1-3 in their first two weeks, only winning a game on the behalf of a Baron throw by Coast in the first week. Crumbz also looked lackluster on Dignitas, overextending to farm into the enemy jungle, failing to making impactful plays, but at least trying to do something.

Then on February 2, 2015, Crumbz, somber, drained, yet composed, posted a vlog on Dignitas’ Youtube to announce he was stepping down from the starting roster.

Historically, players stepping down from teams has been either met with melancholy best wishes or good-riddance. Crumbz’s departure fell into the former category, with people from Reddit, the Dignitas site, Youtube, and Twitter resounding in their support. Crumbz would host a small twitch stream later than night where he did some menial fishing in Runescape, reading the chat and relaxing for what seemed like the first time in a while. One fan in game even came to him in game to give him the Seradomin Sword, one of the strongest swords in the game, for nothing.

Such support for Crumbz is hardly unexpected, as he has always been a bright personality in the community—while on the analyst desk for Season 4’s worlds, he earned the moniker “Crumbz the Prophet” for predicting several correct upsets. With a great voice and charming personality, Crumbz always attracted some support with his relaxed yet direct demeanor, and is more than willing to play both the class-clown and the suave analyst.

With his professional career on hold, one wonders what “Crumbledore” himself will pursue next. Crumbz has voiced a few ideas, such as trying to place number 1 in challenger, streaming all the way while scratching his itch for competition. Maybe he will migrate to an analyst or coaching position, or perhaps join Riot’s legion of casters and analyst desk members. One doesn’t know what the future holds for Alberto Regnifo, but it’s a certainty that his career in LoL should be seen in a positive light domestically, that he has been an invaluable asset to Dignitas, and that the League of Legends community will have his back through his next steps.

This Article was written in honor of Alberto “Crumbz” Regnifo’s contributions to the Dignitas organization, the League of Legends community, and Esports. This Article was released on February 6th, 2015 to commemorate Alberto Regnifo’s Twenty-Second Birthday.