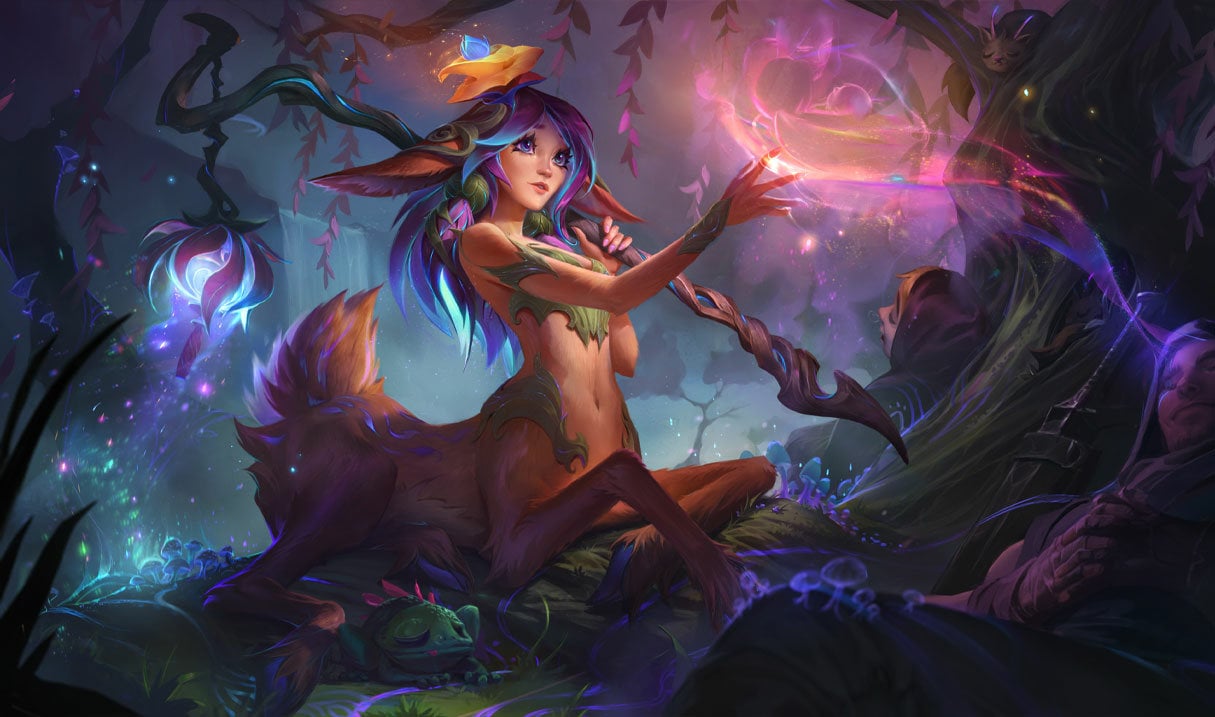 Lillia is the latest addition to the jungle role in League of Legends. She’s one of the most balanced recent releases, having gone through multiple patches without any buffs or nerfs.

Her kit rewards players who know how to orb-walk, since they can maintain a good distance from opponents, while also dishing out a lot of damage and following up with her sleep. In the proper hands, she’s one of the deadliest junglers and is capable of turning around a lost game without issues.

Even if she can decide entire teamfights, she does have some weaknesses you should exploit early on to stop her from snowballing. Here are the best counter picks to control Lillia in the jungle.

Lillia is a farm-heavy jungler who can pick up some early kills due to her high base damage. She excels in teamfights, where she can throw crowd-control (CC) onto the entire opposing team by using her Lifting Lullaby (R) on enemies with passive stacks. This allows your team to prepare for a wombo-combo or delete crucial targets from the opponent’s composition and run over the rest. She has a healthy clear and might look into ganking your laners early on to help them snowball. But you can prepare to counter gank and turn on her by warding around important areas of the map.

She has no dashes or blinks unlike other popular junglers and will not be able to freely move through walls unless she uses Flash. This allows you to create perfect ambush opportunities near your laners, especially if you’re playing an assassin such as Kha’Zix.

With two viable playstyles, either control mage-oriented with Liandry’s Anguish alongside Demonic Embrace or utility-oriented with Moonstone Renewer and Staff of Flowing Waters, you need to pay attention to her build-path and shut down the corresponding target. If she goes for AP, you can invade her and shut her down from snowballing to reduce her pressure. If she goes for a utility-oriented build, you can shut down her carries so that even if she’s ahead, it won’t matter since no carry will be able to dish out the required damage.

Hecarim is one of the most popular League junglers to reappear on the Rift. He’s simple to play and has been picked up by a lot of players due to his teamfight impact with his powerful sustain and strong CC with his ultimate.

He mimics Lillia’s playstyle and is a great AD addition to various compositions. The biggest risk of picking Hecarim into Lillia is if your team is going full AD, giving your enemies a possibility to build armor to deny all your damage.

Look into full clearing your jungle and try to get a good control of the river by picking up the Scuttle Crabs. They are a good source of vision and can expose Lillia’s plan to gank or go for an objective, giving you the opportunity to turn against her and shut her down. If you’ve fully cleared your jungle and have a decision on what to do, look into invading Lillia to pick up her gold and experience or look into setting up gank opportunities on extended opponents.

During the mid game, if you got a lead you should be able to roll over enemies in teamfights thanks to your Mythic item power spike. Look into securing objectives and engage Lillia whenever you see her since her damage isn’t high enough to take you head on. In late-game teamfights look for good opportunities to use your ultimate to disrupt the opposing team and focus the carries down.

Unlike Hecarim, Kha’Zix is a more offensive jungler who doesn’t focus on farming or being an initiator for his team. If you pick Kha’Zix up, you want to constantly invade the opposing jungler and feast on their creeps instead of farming your jungle. You want to set them behind and force them to come to your jungle, where you can call your teammates to ambush the opponent and force them to scavenge for experience and gold from his laners.

Pick up a couple of early Lethality items and use them to assassinate Lillia before she can get some armor and set her behind while she tries to scale. Swap to an Oracle Lens early on to help you with this predator playstyle. Use it to clear vision around key areas such as the lanes or objective areas and wait her out. If you’ve warded her jungle and know when the gank is coming from, you can look to unleash your burst damage near a bush to hopefully kill her before she realizes what happened. Your isolation damage combined with your invisibility allow you to take her down easily.

Since warding alone is quite risky and should be avoided, you need to talk to your team to help you out with getting offensive vision. You should set up vision usually with your support, who can spam wards using their support item.

In the mid to late game, it’s important to keep up with a predator playstyle and avoid exposing yourself to the opposing team near your teammates. Look into various flanks that expose the opposing carries and delete them before they get a chance to do anything. While killing Lillia before a teamfight could make it easier, she will usually be quite tanky with either build so it might prove to be too difficult. As a result, shutting down her carries is much easier to do.

Elise is one of the strongest AP counters to Lillia. You have a lot of early-game damage and usually want to snowball the game before it advances to the later stages where your utility and damage falls off.

Try to analyze the enemy jungler’s pathing and look into full clearing your jungle before going for invades. Always fight for scuttle crabs and talk to your team to follow the opposing laners if they try to contest. You’re much stronger early on and shouldn’t give up the early gold and experience you can pick up against the opposing Lillia.

Since Lillia is a farm-heavy jungler, you need to constantly invade her to deny crucial experience so she falls behind on levels. Remember to clear your jungle as well and don’t leave it unguarded while you’re invading, since Lillia could do a reverse clear. While you farm her jungle, she could be farming yours, and your aggressive playstyle impact will be diminished. After clearing the opposing jungle, look into creating gank opportunities on the opposing laners from their own jungle. Your Cocoon/Rappel (E) allows you to drop tower aggro, giving you the chance to soak some tower shots to gank from unexpected angles.

If the game reaches the mid stages with you both even in gold and experience, Lillia will have a much more meaningful impact due to her area-of-effect (AoE) potential while you’re mostly a single-target burst damage dealer. As a result, it’s important to get early leads where you can. If the game reached the later stages, you’ll most likely be a CC bot with a bit of damage. Try to go for flanks on the opposing carries and set up kills for your team instead of going for five-vs-five full-blown teamfights since you’ll most likely lose them.

Items to build into Lillia

This is the boots option when facing Lillia. It gives you magic resist and reduces the incoming CC duration, perfect for preventing her from making huge teamfight plays that could wipe you and your team.

This item is amazing for ability power junglers, allowing you to survive Lillia’s burst if you get caught by instantly going to stasis. While armor isn’t that helpful against Lillia, it can be useful against other AD teammates she has.

This item is great if the enemy team has a lot of play-making abilities such as Lillia, Zoe, Leona, Nautilus, or others. It provides a good chunk of magic resist on top of an on-demand cleanse effect. It can be the difference between life and death in the long run and you should acquire it if you get caught often.

This is a great early-game anti-healing item, especially useful against Lillia who usually runs with Ravenous Hunter for sustain. Due to the fact that she will either have a lot of self-sustain or provide a lot of sustain to her allies, getting an anti-healing item is crucial to putting a stop to her domination.

This is the Grievous Wounds items you should go for with AP junglers to stop Lillia from either healing herself with her AP-oriented build or providing a lot of healing to her team via her utility-oriented build.