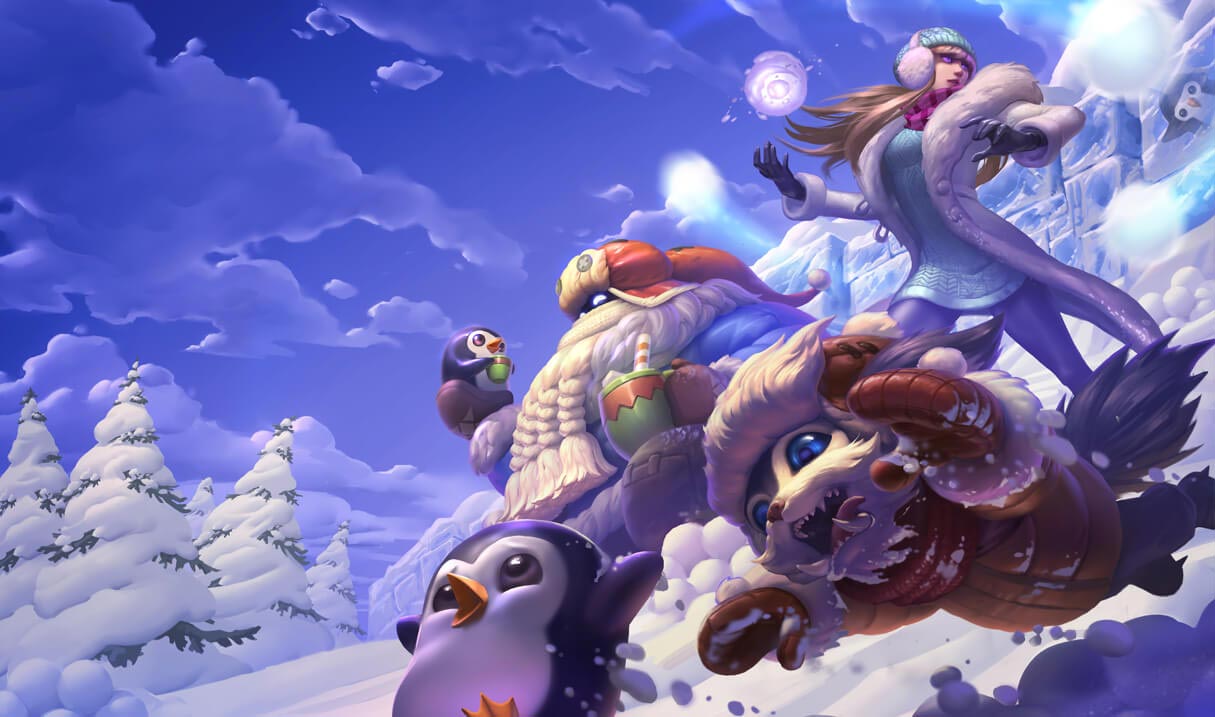 One of the best ways for League of Legends fans to celebrate the holiday season is grabbing their friends for a festive game complete with Snowdown skins.

Every year, Riot Games releases a new set of Christmas-themed skins to get the player base into the holiday spirit based on different aspects of the festive season. Last year’s skin line took inspiration from the iconic Christmas story of The Nutcracker with a Sugar Rush line set in the pre-existing Candy Kingdom universe of Runeterra.

Although the Christmas Rift might not return this year, you can still get into the holiday spirit with our list of some of the game’s best seasonal skins, from Winter Wonder to Snowdown. Although these cosmetics aren’t available year-round, the Snowdown skins become available for purchase during the festive season.

Here are the best Christmas-themed skins in League.

Although a lot of the original Snowdown skins haven’t aged gracefully, Nunu’s recent rework came with a redesign for all of his existing skins, including Workshop Nunu. Turning Willump into a giant, fluffy Rudolph was a stroke of genius on behalf of Riot. This is one of the cutest skins in the Snowdown lineup.

Everyone’s been through some kind of re-gifting nightmare over the holiday season. Someone buys you a gift you don’t want, you re-wrap it the following year to save some money only to realize that the original gifter will be watching as the gift is unwrapped. That feeling of festive dread is the motivation behind 2010’s Re-Gifted Amumu, a crying Christmas gift complete with a shiny yellow bow.

Christmas wouldn’t be Christmas without a snowman—and this snowman comes with artillery turrets, candy cane projectiles, and snowball bombs. The revered inventor, this time with a carrot for a nose, got a wintery makeover in 2011’s Snowdown set.

Not your traditional Santa Claus, Bad Santa Veigar brings gifts of entropy and destruction in his sleigh—not exactly what you want to find under the tree on Christmas morning. His Event Horizon got a holiday upgrade with tinsel and Christmas ornaments, and he throws a giant gift at you when casting his Primordial Burst. What a way to go.

Unlike many of the other skins on this list, Winter Wonder Lulu isn’t explicitly a Christmas skin. In 2013, Riot took its first foray into a more wintery theme for its Snowdown skins rather than making them explicitly Christmassy. If you love the holiday season but don’t celebrate Christmas, then this Lulu skin is a perfect choice for you to get into the winter spirit on the Rift with beautiful snowflake particles and Pix taking on the form of a winged Poro.

If we were to rank all of the Snowdown skins from best to worst, there’s a high chance that Poro Rider Sejuani would make the top of the list. Complete with a poro-snax on a stick to encourage her furry steed, this skin is one of the few cosmetics in the game to take advantage of League’s iconic balls of fluff. Come on, it’s a giant poro. How could you not love it?

Snow Day Bard, complete with his little cups of magical hot cocoa, has become one of the most iconic Christmas skins in the game—and for good reason. If his icy particle effects weren’t enough, you turn into a penguin when taking a magical journey. Need we say more?

There’s no better champion to take on the role of Runeterra’s Santa Claus than Braum. Although he’s a little more muscular than the traditional Santa, he’s got the jolly smile locked and loaded, rounding out his festive ensemble by replacing his traditional shield with a wintery fireplace complete with Christmas stockings.

A newer addition to the Snowdown roster, Snow Fawn Poppy was released in 2017 as a friendly helper for Santa Draven. Complete with a jingle bell on the end of her hammer, she’ll smack you with Christmas spirit.

The 2018 Snowdown skins came complete with their own epic animated tale in which Mundo, Soraka, Neeko, and Master Yi saved the world of Snowdown from the evil Ice King Twitch. Although all of 2018’s Snowdown skins were excellent, Master Yi wins the best of the year simply because his sword is a carrot. What more could you ask for from Riot?

Ziggs is one of the few champions to receive two Snowdown skins—and this one is for all you Christmas candy lovers. Complete with a bonbon minefield and an exploding cupcake recall animation, the Hexplosives Expert gets a sugar-coated twist for the holiday season.

With 41 of the League champions now having Snowdown skins, there are plenty of team compositions you can run with friends or in your ranked games if you want a squad full of Christmas-themed champs.