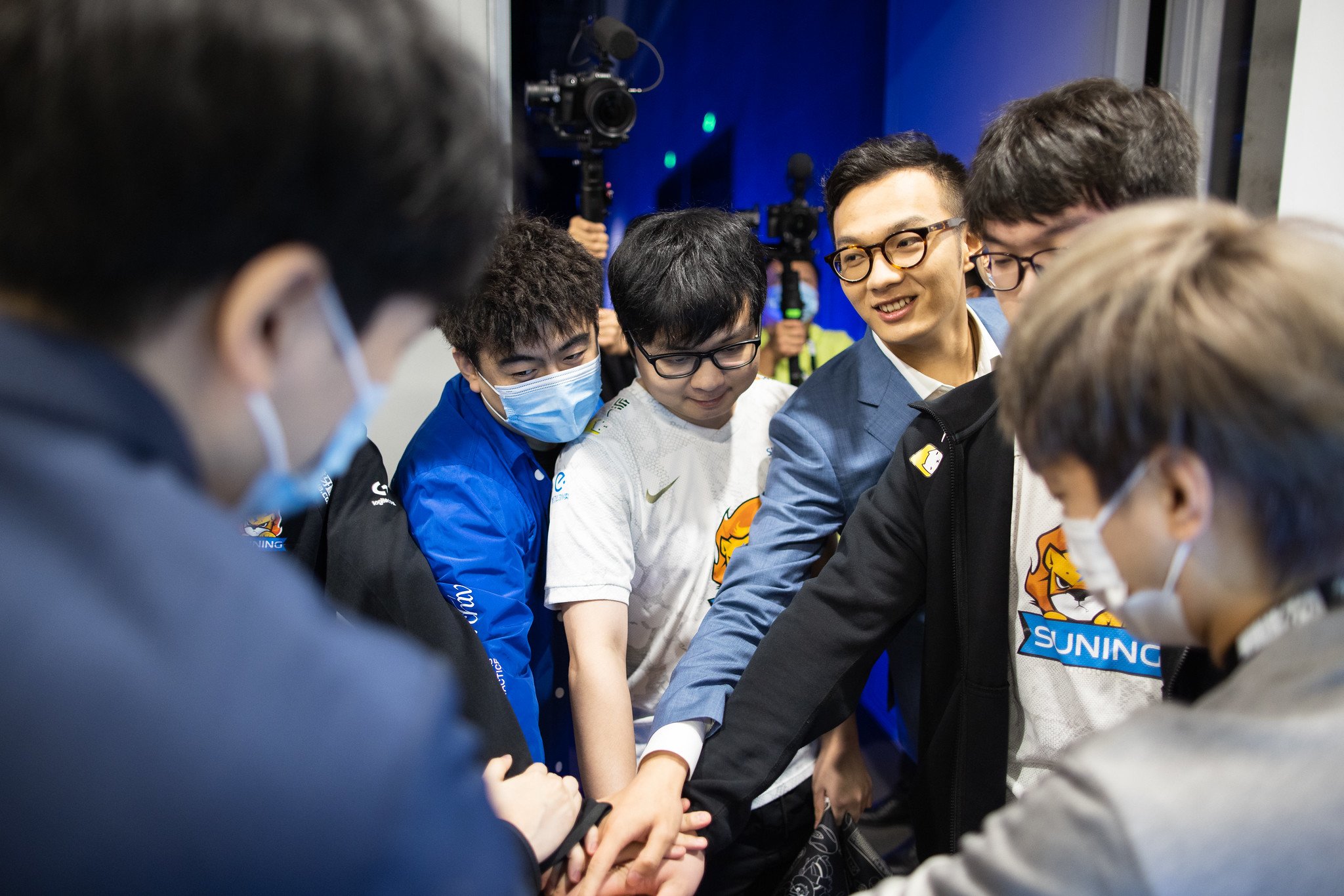 Suning’s arrival at the 2020 League of Legends World Championship semifinals marks possibly one of the biggest upsets of the tournament.

Coming up against fellow LPL representatives JD Gaming in the quarterfinals, regional performance would have suggested Suning as clear underdogs. But their performance against G2 Esports in the group stage saw them enter knockouts as the first-place team, matched-up against a second-place JDG who fell to DAMWON Gaming in their group.

The series was short-lived, and although JDG were able to take a single game, they were no match for a Suning who have looked on impeccable form. Suning’s bot lane have quietly secured their spot as one of the best at the tournament, while their top lane has gained international renown for his aggressive playstyle and frequent solo kills. A combination of three rookies and two imported veterans, Suning come into the semifinals with nothing to lose and everything to gain.

Top Esports, however, have had a much less glorious journey to the semifinals. Entering the tournament as the LPL’s No. 1 seed, they had the expectations of a two-time world championship region resting on their shoulders. Those expectations were, for the most part, fulfilled, with the team dropping only a single game in the group stage. But that game was dropped to none other than the LCS’s second seed FlyQuest, who showed TES up in fantastic style with an absolutely dominating victory. Although their 6-0 dreams had been crushed, they were still clear favorites in their quarterfinal against Fnatic, a series that many expected to be over before it had really even started.

But this was not the case. Despite eventually losing the series in the first reverse sweep in World Championship history, Fnatic exposed some clear weaknesses in TES’s supposedly impenetrable armor. The dream duo of JackeyLove and yuyanjia accrued a total of 18 deaths in two games, with yuyanjia setting a new world record for most deaths at 15 minutes in his opening Tahm Kench game.

The dominance Fnatic showed in their first two games proved that gods can truly bleed—but will Suning be able to deliver the killing blow?

Fighting fire with fire in the bot lane

It perhaps speaks to the international renown of the LPL’s AD carries that even in a utility marksman meta, all eyes are on the bottom lane in this matchup.

JackeyLove’s World Championship title and international prestige precede him in this matchup, and not without reason. Although his DPM was overtaken this weekend by Gen.G’s Ruler (by a mere eight damage), he’s been TES’ late-game bastion. This late-game prowess, however, has often come at the expense of his laning phase, something that was made glaringly obvious against Rekkles and Hylissang’s early-game strength in their quarterfinal.

JackeyLove is, on average, down in both gold and experience to his lane opponent at 10 minutes into the game. He also has the highest percentage of his team’s deaths of any AD carry left at the tournament, accounting for 21 percent of TES’ total deaths. Second only to G2’s Perkz in overall number of deaths, JackeyLove’s hot-headed playstyle can sometimes end up landing him in hot water. He will play as though he is ahead regardless of the game state, barreling into the enemy team and looking for the game-winning pentakill even while sitting on inopportune items and a gold deficit.

Huanfeng, on the other hand, is becoming Suning’s strongest asset. He plays the traditional AD carry role of a late-game damage machine. Jungler SofM’s preference for more supportive picks means that Huanfeng is responsible for the damage output that many other teams find in full carry-style junglers. His teamfight positioning is unparalleled, and he is often the player left responsible for cleaning up after the scrappy objective fights that have been so prevalent at this World Championship.

This lane will be more than just a clash of playstyles. These players are playing for pride: JackeyLove for the retention of his former World Championship glory, and Huanfeng to finally establish himself as more than just a talented rookie. With Uzi’s retirement last year, JackeyLove is one of the last bastions of China’s legendary AD carries, and defeating him in this matchup would bring Huanfeng one step closer to the kind of legendary status that is only afforded to a lucky few.

At the “top” of their game

The LPL’s top laners have been receiving their fair share of attention this tournament. Although Ornn’s presence in the meta has made the top lane champion pool seem, at times, a little stale, the LPL’s top lane representatives have shown champion oceans.

Both 369 and Bin showed massive amounts of champion versatility in their group stage games, each with unique picks that currently do not overlap. Bin has found success on aggressive, split-pushing style top laners like Jayce, Irelia, and Jax. 369 has found his niche in teamfighters like Sion and Vlad, vastly different in terms of mechanics but similar in the playstyle of backline disruption in grouped-up situations.

The deal-breaker in this top lane matchup will be the manipulation of side lanes. Whereas Bin wants to push a laning lead all the way to the enemy’s inhibitors, 369 wants to get out of lane as soon as possible, group up with his team, and set up fights to unlock JackeyLove. TES will be looking to bring the fight to Bin, grouping topside to force him into uneven fights. There is potential to put 369 on Sion and send him bottom lane, forcing Bin to deal with a two-vs-one lane swap. Suning, meanwhile, will be keeping SofM’s attention topside, looking to snowball Bin into an early lead that can quickly send the game spiraling out of TES’ control. With the highest kill numbers of any top laner at the tournament at 43 total kills and a KDA of 3.6, Bin can carry a game almost single-handedly if put in an advantageous position in the early game.

With weak side-laning having been the name of the game at Worlds, Suning will have to break the mold if they want Bin to be utilized to his full effectiveness in this matchup. Suning’s win condition on the topside is inarguably more difficult to reach. But if they can create a game state that suits Bin, he can very well win them the game off his own back. TES, however, need to ensure 369 can reach his tank items in time for them to teamfight, and they will have won the top lane matchup.

If there is one thing that these games can guarantee, it’s entertainment value. If you’re not a regular watcher of the LPL, you may not quite know what to expect coming into a China vs. China matchup, but both of their regional finals were adrenaline-filled series that went to five games. Although Suning failed to make it to either of those finals, they have shown at this tournament that they are more than ready to handle whatever TES might throw at them.

The pressure points of this matchup are top lane and bot lane. Karsa and SofM will have to decide where best to focus their attention, and the first gank will decide the lane through which the game is played. If Karsa is able to successfully gank the bot lane, SofM won’t have the luxury of simply trading for a gank on the top side. If he allows JackeyLove to snowball and focuses all his attention on Bin, TES can very well snatch the game out from under Suning’s feet in the teamfight stage. These teams play so similarly that it is difficult to predict a winner on style alone, but recent performance would almost suggest that Suning has the advantage despite community perception of TES’ strength.

Regardless of the outcome, it’s almost certain that we’re in for a treat of a five-game series. You can watch the match on Oct. 25 at 5am CT.