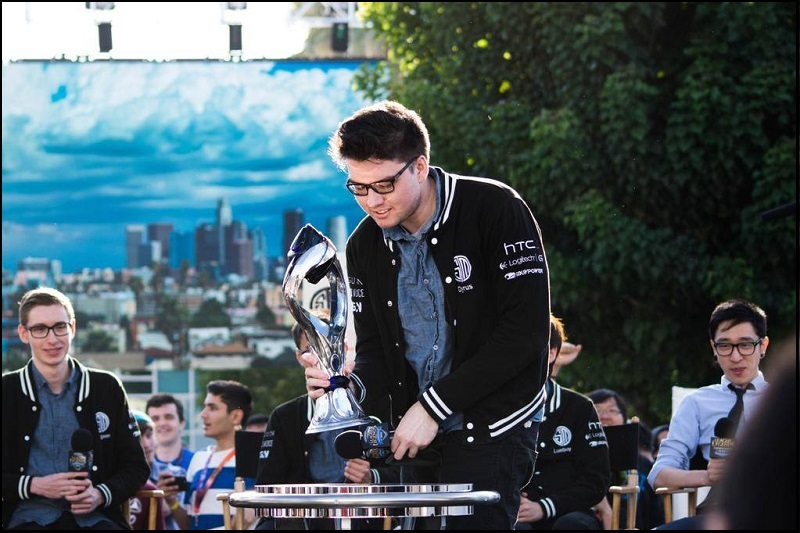 The more things change, the more they stay the same. This age old adage is particularly true when applied to a certain Team SoloMid (TSM). While the old guard may have left the reins to Søren “Bjergsen” Bjerg, Jang-sik “Lustboy” Ham and co, there is still one player who has stood the test of time — Marcus “Dyrus” Hill.

In fact, with multiple tournament victories coming consistently over the past few years, Dyrus is one of the most successful League of Legends players ever to grace the west. Some of his achievements include being a multiple time North American League Championship Series (NA LCS) winner, with as recently as the spring split of this year — and winning the Intel Extreme Masters (IEM) World Championship in the same time period — uncharted territory for TSM as it marks their first international success.

It’s easy to forget just how successful over his career Dyrus has been when the logic and skill behind his play is lost in the excitement and exposure of some of his more flamboyant teammates. But to take a moment and reflect on his career, Dyrus has been consistently top two in North America since joining TSM. Of course there are the occasional dips in form, but almost every player experiences these. As most would know, form is a very fluid thing in sports — what of the high death games that strike out at memory this split? As much criticism as Dyrus receives, does he deserve it, or are these results due to TSM’s style of play?

The first thing we need to acknowledge with Dyrus, is that virtually every game TSM plays, he does what he does without farm. In TSM, the economy of the map is focused onto Bjergsen and Jason “WildTurtle” Tran while the income of the laning phase is drastically reduced for top laners thanks to current 2 vs. 1 meta. It has been this way for some time, and Dyrus has been one of the more vocal in professing his dislike of the way the game is currently played.

Not only this, but one of the favourite strategies for teams going up against TSM is focusing Dyrus. In a world where farm is hard to come by already, coupled with the extra attention to his lane from the opponents, the top lane becomes a difficult place for players to thrive. It is quite impressive then, that he somehow always manages to remain relevant in games while severely underfarmed and usually with a couple of deaths to set him back. Even more impressive is that Dyrus tends to do this on his own, finding farm across the map as the game transitions into later stages while generally having Lucas “Santorin” Tao Kilmer Larsen tend to the mid lane to gain an advantage for Bjergsen, although recently TSM has been attempting to shift from this playstyle.

This is not to say TSM never pays attention to top lane, but Yoonsup “Locodoco” Choi and the staff behind the scene are not idiots. They understand and know the power of Dyrus in the top lane — when given farm and left to 1 vs. 1 he is one of the most intimidating presences coming out of said lane in the west. Based on history, you can understand then why so few people are willing to let the United States national get ahead.

One example of this may remind you of the TSM vs. Counter Logic Gaming match from week 8 of the 2015 spring split, where Dyrus was significantly behind in farm for the entirety of the game (ending the game with less farm than Santorin) and still had a kill participation of 78% with only two deaths, playing Lulu. Even as the meta shifts, the Lulu pick remains a favourite of Dyrus’. Whether that’s from personal or team choice, it’s hard to say, but the fact is he performs on the Fae Sorceress.

An interesting question to pose here is just how important is the role of Dyrus for TSM in its current state?

Well, if you consider all the nuances he has to deal with compared to other successful top laners, it is quite important. This playstyle works for TSM, and it is a testament to the skill of Dyrus that he can be as effective as he is while playing from behind. Additionally, the fact that he can perform and apply so much pressure on high-economy champions when actually farmed is a huge advantage. The consistency and skill of Dyrus enable more strategic options for his team — his role is important, but the presence, experience, longevity and ability to play on countless iterations of the game at the highest level over many years make him absolutely vital to the success of the organisation. Not to mention, he’s rather hard to ban out, despite his teams playstyle favouring the Lulu/Maokai picks.

So what of the negatives? It’s true, Dyrus can have bad performances, albeit relatively rarely (relative compared to other top laners in the west). Additionally, some of these bad performances have come internationally. And, as previous experiences indicate, he can be slow to adapt to the meta compared to other players of the same role. Still, one has to compare this downside to the fact that he has been relatively consistent across most significant meta shifts in the past year and a half — a fact that demands respect. Of course, there’s something to be said for the fact that while Lulu has fallen out of favour in the Cinderhulk meta, she’s still played by TSM — though this is obviously a very stylistic pick and it’s not like they do not (or cannot) play Cinderhulk champions.

Considering how dominant Dyrus has been over a period of time that would see most players emerge, peak and fade away — in any eSport, not just League of Legends — for him to still be at his peak is phenomenal, and he doesn’t look to be slowing down anytime soon. Credit where it’s due, TSM would not be where it is today without the help of one Marcus Hill.

So, how does TSM stack up against their competition in the region? Indeed, how do we analyse the results of IEM Katowice going forward? Well, frankly, compared to everyone else in North America, TSM looked like they were on another level. NA LCS was honestly not difficult at all for them to win — however as Andy “Reginald” Dinh has stated time and time again: “This team was designed to win worlds.”

It’s natural then that their region was an afterthought when the team tasted their first international success at Katowice, although realistically the tournament was marred in a few ways; there was a small sample pool; GE Tigers choked; the ‘worst team in China’ at the time, World Elite, were sent instead of a team such as Edward Gaming (EDG) or LGD Gaming; and the semi-finals were only best-of-three, as opposed to the much favoured best-of-five format. These events, coupled with some discrepancies involving preparation time and patches make this tournament unsafe to base any international assumptions on. That said, it was still an international tournament — TSM still won.

Leading into the Mid-Season Invitational (MSI), the question is this: ‘Is TSM the real deal?’

This is not the first time there has been excitement surrounding the team as it enters an international tournament, but something is certainly different this time. The players look ready, the staff look focused and as a group they have an excellent grasp on how TSM want to play the 5.7 patch. Coming off of the back of dominating performances both internationally and locally, they certainly have the momentum and support of their entire region.

And they’ll need it too. MSI is a different game all together to the IEM they won several weeks ago. Sang-Hyeok “Faker” Lee and Seong-ung “bengi” Bae didn’t even play when SK Telecom T1 (SKT) qualified — SKT absolutely picked GE Tigers apart with only their second roster. Edward Gaming of China have also qualified, a team that has absolutely annihilated everyone in their region on their way to qualification. Not to be counted out, Fnatic, a new and impressive team put together by legendary European support Bora “YellOwStaR” Kim also stand in the way of TSM.

Looking purely at MSI, it’s hard to understate the strength of some of these teams. SKT looks unbeatable, frankly. EDG is still very strong but may have lost a step on patch 5.7, opening the door for SKT to firmly remove any doubt in the minds of the world that they are the strongest team in competitive League of Legends at this time. And what of the westerners? Is it possible that TSM pulls out another miracle, just like Katowice? This isn’t a nervous GE Tigers or an inconsistent World Elite — this is SK Telecom T1 and Edward Gaming. The task is much bigger, but if recent results are any indication, this may be their greatest opportunity.

This may be the closest the gap has ever been between the west and the east — while there will always be doubters of the west, and doubters of players such as Dyrus, both he and TSM have absolutely stepped up to the plate in the last few months.

They’ve conquered North America — now they look to the world.