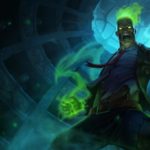 Skins in League of Legends are a great way to showcase one’s sense of style. The storylines attached to each of them deepen the game’s lore, and they also help players rekindle their holiday spirits.

With Halloween approaching and outside decorations slowly shifting toward pumpkins and skeletons, Riot Games is about to kick off the annual Harrowing event. Not only does a set of new quests become available for players to complete, but Riot also uses the occasion to release Halloween-themed skins that tend to be as iconic as a cosmetic can get.

Considering these skins are only available for a limited time inside the game shop, you’ll need to get them while they’re hot. You’ll need to resort to loot boxes throughout the year, otherwise, and the chances of opening a holiday skin out of all the cosmetics in League aren’t that high. Riot brings back seasonal skins when their respective events kick off, however, meaning you can also wait for a year to get them in case you miss the chance.

While everyone’s favorite will be heavily based on the champions they main, we tried focusing on each skin’s visual aspects alongside how fitting they are to Halloween.

Here are the best Halloween skins in League.

Blitzcrank functions well in a lane, but it’s hard to miss his torso that is unusually large compared to his head.

Witch’s Brew Blitzcrank reimagines the support as a cauldron that was enhanced with the gift of life to assist Bewitching Miss Fortune.

Retailing for 1,350 RP, Blitzcrank’s cauldron body has classic Halloween carvings, but he has an evil-looking eye instead of a head. His eye certainly resembles Vel’Koz a little, but there doesn’t seem to be a connection between them as long as the Harrowing lore goes.

As cute as he may be, it’s hard to find anyone that legitimately enjoys playing against Teemo. The little bugger turns every game into a 3D version of Minesweeper, and his Halloween skin depicts him perfectly.

Priced at 1,350 RP, the Little Devil Teemo skin cracks a window to every Teemo player’s mind. The sinister tiny red ball of fur will make it even more annoying to step onto his mines, and you may feel the urge to switch lanes with a teammate that can resist his mind games.

The top lane is where the most fearless players clash in League. It isn’t an easy lane by any means, which makes winning it even more satisfying. A top laner has to accurately predict the enemy jungler’s position and anticipate any rotations from the mid laner, which can be a lot tougher when you’re up against a vampire.

Count Kledula features the crazy top lane brawler as Dracula, and his trusty mount Skaarl accompanies him as a bat.

Priced at 1,350 RP, the walking bat is enough by itself to justify this skin’s price. If you aren’t convinced, however, we recommend checking out Count Kledula’s spell animations since they are pieces of art.

Tristana is one of the more reliable AD carry champions in the game. Her escape mechanism always allows her to get out of trouble, and it serves excellently in turning her into a flying witch.

Selling for 1,350 RP, Bewitching Tristane ditches the guns for a cauldron. It would be nice to imagine Witch’s Brew Blitzcrank as Tristana’s cauldron that gained self-awareness, but they aren’t connected in any way.

Aside from fitting colors and spells, Bewitching Tristana also has some of the best voice lines for a Harrowing skin.

One of the newest members of the Harrowing skin line, Bewitching Elise, just ups the quality to the highest it’s ever been when it comes to Halloween-themed skins.

Priced at 1,350 RP, Bewitching Elise has a great dark purple theme going on with some of the best spell effects for a release skin. Her spiderlings turn into pumpkin-lings, which is a dream come true for Elise mains that are also fans of the Halloween season.

There are a total of four houses in the Harrowing skin line: Witches, Vampires, Monsters, and Trick-or-Treaters. Considering how stacked up the first three categories are, Trick-or-Treaters need all the help they can get to survive the night with the most amount of candy.

Released in 2011 for 975 RP, FrankenTibbers Annie is one of the oldest Halloween skins in League. Don’t let its price and release date fool you, however, since it’s still one of the best ones yet with green spell animations. Annie’s hair-game is also on point, and Tibbers steals the show after level six as a gigantic Frankenstein.

The movie Ghost Rider received a sequel, but anyone waiting for a third movie was left hanging. League players, on the other hand, have a chance to play as Ghost Rider by simply picking Hecarim.

Though the champion has multiple skins that turn him into a flaming monster, only one of them turns his head into a pumpkin, and that’s all that matters.

Priced at 975 RP, Headless Hecarim could make an excellent yard decoration for Halloween in real-life when he isn’t busy wreaking havoc on side lanes.

Rare skins get new spell animations alongside voice lines. Rocking a completely different walking animation, however, is something reserved for the elite.

Many Halloween skins came after Zombie Brand, but it’s safe to say that this undead fellow still has what it takes to sit in the No. 1 spot.

Priced at 1,820 RP, Zombie Brand rocks green flames all over his body and in his spells. The zombie voice over is on point, and the comic book-level walk animation makes playing him a blast.