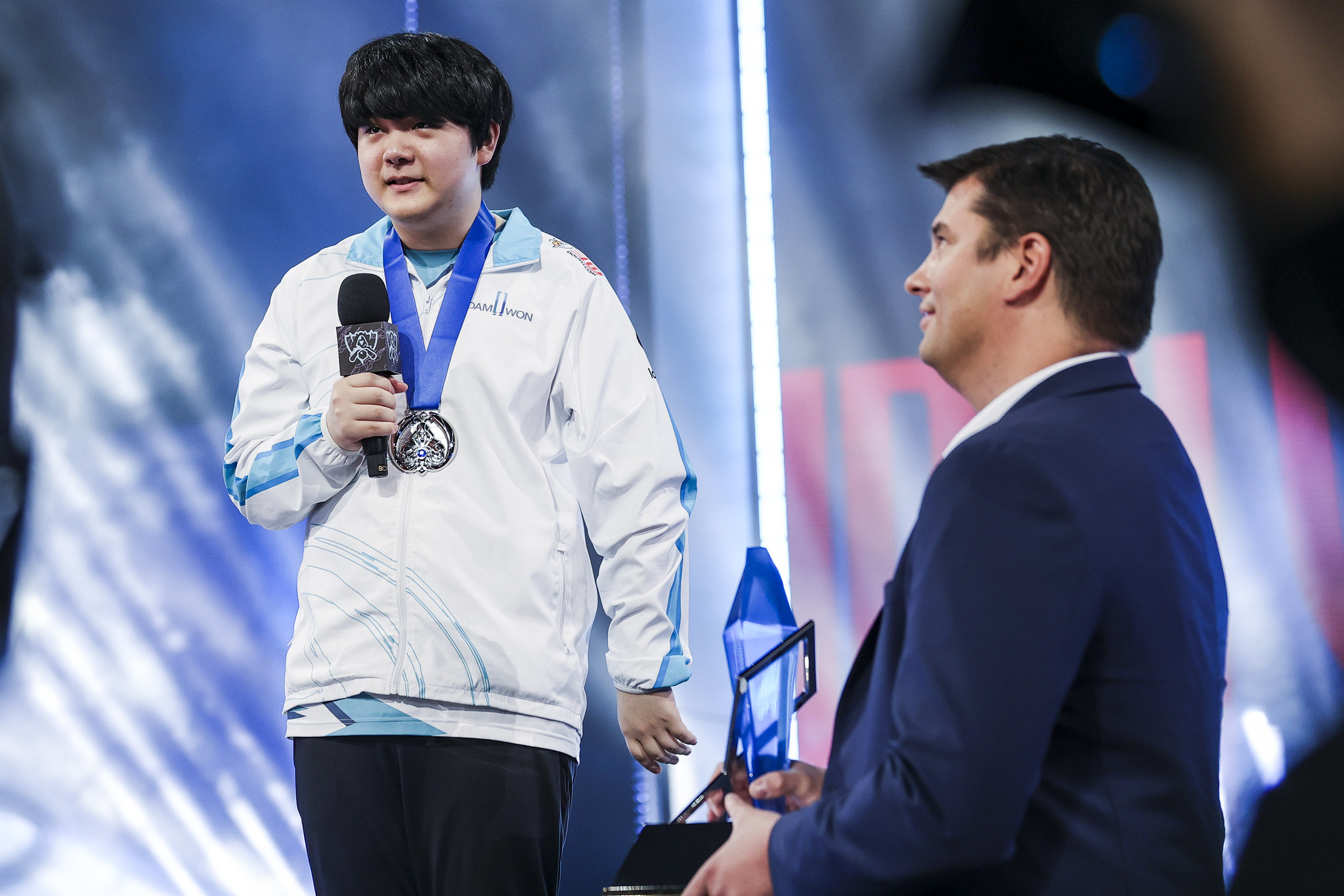 The League of Legends World Championship is a tournament that’s all about the teams. It can often feel as if individual identities and performances are pushed to the wayside in favor of team-oriented narratives.

At a tournament like Worlds, the aim is always to win it all. Anything less than that can feel like a failure to players who have worked the entire year for a single shot at glory. “I was happy about us doing well… still, no one will really remember how we played today,” Fnatic AD carry Rekkles said about his duo lane’s performance after the team’s 3-2 defeat to Top Esports in the semifinals of the 2020 World Championship. And these words ring true for many pros.

That doesn’t mean, however, that good individual performances can’t be celebrated regardless of a team’s end result. Every year, the skill bar in League esports continues to be raised—and 2020 was no exception. This year’s Worlds saw insane mechanical outplays, big-brained map movements, and clean cohesive teamwork across the board. And although DAMWON Gaming managed to take a commanding victory and secure the championship, the teams in this year’s knockout stage were some of the strongest we’ve seen.

If there’s any time for players to grab some clips for their highlight reels, it’s at the World Championship. Here are some of the best performing players from this year’s major tournament.

Despite Fnatic’s exit from the tournament at the hands of Top Esports, Fnatic’s bot lane duo proved to be one of the world’s strongest. In a meta where ADCs were relegated to a utility role, the Fnatic duo put forward some shockingly lane-dominant statistics throughout their time at Worlds. Rekkles was in the top three for all three lane differentials at 10 minutes among ADCs at the tournament, meaning he was invariably significantly ahead in gold, experience, and creep score at 10 minutes, according to esports statistics site Oracle’s Elixir.

Although Rekkles has always been one of the best in the business, this tournament gave Hylissang a chance to shine. The support was subject to more than his fair share of criticism during the LEC Summer Split, where his aggressive plays looked much more like intentional feeds against European opponents.

At Worlds, however, Hylissang looked like a completely different player. He had some fantastic engages alongside mid laner Nemesis, setting up for Selfmade and Rekkles to carry. Fans got to see the peak of Hylissang on a cooperative Fnatic squad that was willing to follow up on some of his riskier engages and commit as a team, proving that a lot of his supposed “underperformance” in the LEC came from a lack of team cohesion rather than personal failings.

It’s admittedly hard to back up competent support play with statistics since the support is the player on the team who should be dying most often to set up and engage fights. But it’s the way in which they die that matters. And at this tournament, Hylissang performed a complete 180 on some of his less graceful moments in the LEC.

It’s hard to stand out among the best players in the world. Players who have looked like star performers in their home region can look like they’re barely surviving against the strength of international competition at Worlds. This wasn’t an issue for G2’s Caps, however.

The list of Caps’ Worlds accolades just goes on and on. He had the second-highest kill participation percentage of any mid laner at the tournament at 72.2 percent, the highest damage per minute in the mid lane role at 555, and the highest number of kills of any non-finalist player, according to Oracle’s Elixir. Although his laning stats were actually a little below average, this isn’t without its reasons.

G2’s penchant for fighting as a group means sacrificing early lane dominance to roam to skirmishes elsewhere—and Caps’ experience and gold differentials definitely suffered as a result of this. But the true display of his skill came from his ability to completely overcome any of these laning deficits in the late game and put up one of the best mid lane performances at the tournament.

Many European fans were worried about how Caps would perform against the competition at this year’s Worlds. He’s now cemented himself as one of the best mid laners Europe has ever produced. But there’s a big step up between Europe and the entire international scene. Those fears were unfounded and Caps’ 2020 performance has only further bumped his name up the list of the greatest mids of all time.

It was hard for Karsa and TES to live up to expectations at this year’s World Championship after coming into the tournament as favorites for a seat in the finals and missing out on that spot in a surprising upset to Suning. When the world expects perfection, anything less can feel like a failure.

But Karsa’s performance at the World Championship was far from a failure since he proved to be one of the most flexible junglers in the world. The Worlds meta predicated a hard-carry style, but Karsa found just as much success on Gragas and Lee Sin as he did on Graves and Nidalee. With his strong laners, he still looked like an incredible player. And when those laners fell apart, he was there to pick up the pieces and set up for objective fights even in a deficit.

Karsa will likely try to come back even stronger in 2021. As one of League’s most experienced players, he’s brought savvy and intelligence to every team he’s been on since Flash Wolves.

When you consider that Bin turned 18 two days before the World Championship began, you can begin to understand how genuinely breathtaking his performance was on the Worlds stage. As one of the tournament’s youngest players, many were unsure what to expect from Suning’s top laner with stage fright being a real and worrying possibility in the international spotlight.

Known domestically for his lane dominance and aggressive style, Bin looked right at home from the moment he stepped onto the Worlds stage. He had the third-highest total kills at the tournament, according to Oracle’s Elixir, beaten only by his own AD carry Huanfeng and DWG’s Canyon. He also had the highest DPM of any top laner at the tournament and the second-highest CS per minute. Although his experience and CS differentials at 10 minutes were nothing to write home about, this came from a tendency to take incredibly risky early trades alongside his jungler. Who needs farm and wave manipulation when you can kill your lane opponent on repeat?

Despite falling short in the finals, Bin is an incredibly exciting talent to have in competitive League. His champion pool is more like a champion ocean and his aggressiveness and willingness to take risks (while at times a little reckless) is promising to see in someone so young. Temperance can be taught, but aggression is much harder to learn. With experience and time, Bin is on track to become one of the best top laners in League.

There’s nobody else who could have taken the No. 1 spot on this list. Canyon was the best performing player at Worlds 2020 in the most crucial role and won his team a championship as if it was just a regular day of scrims. DWG’s dominance this year was almost unprecedented and Canyon played a huge part in that success. For the third year in a row, the finals MVP is a jungler—but 2020’s jungle meta looked a lot different than previous years.

Coming into the tournament, carry junglers were the name of the game, putting unique pressure on a lot of experienced junglers who were used to filling a much more supportive role. Having a jungler as one of your primary carries forces a team to adapt to a much more self-sufficient style in the early game, particularly for solo laners. But backed up by two of the best solo lane players in the world, Canyon made a carry style look as easy as breathing.

He racked up the highest kill count of the entire tournament with 87 kills over the course of 17 games, according to Oracle’s Elixir. His DPM was the highest of the jungle pool at 471, and although his champion pool wasn’t the widest, it was by far the most effective. His skill on Graves will haunt his Worlds opponents for years to come. His complete and total dominance on the champion has set a blueprint for how junglers can operate as a carry. All that at only 18 years old? Canyon has a bright future ahead of him.

Although Worlds is much more about team play than individual performances, this year more than ever before was reliant on the individual skill of certain roles.  As opposed to the heavily teamplay-focused style of last year’s winner FunPlus Phoenix, 2020 was all about lane dominance and jungle skirmishes in the early game—and all of the players on this list had the potential to single-handedly win their team a game with a split-second decision.

Although only one team could be crowned the victors, there are far more than five players who put up performances to be proud of at the 2020 World Championship. With the worldwide roster moves that always come in the offseason, these players could be hot commodities for teams looking to rebuild for 2021.