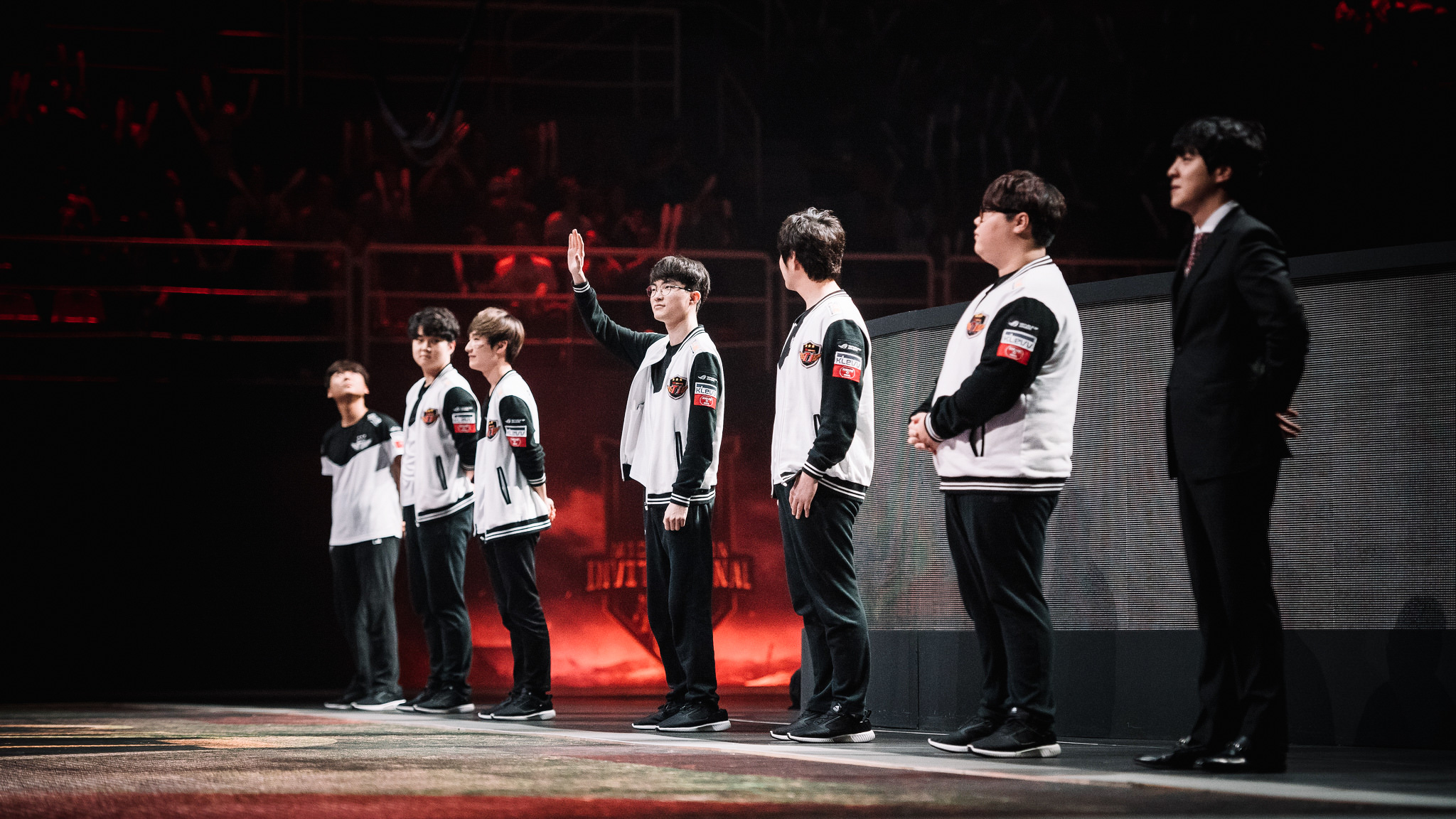 SK Telecom T1 vs. KT Rolster was supposed to be the next great League of Legends rivalry.

There were plenty of storylines on both sides. Lee “Faker” Sang-hyeok, the best player in history, vs. Song “Smeb” Kyung-ho, the man who desperately wanted to take that title. Smeb’s former side kick, jungler Han “Peanut” Wang-ho, now playing with Faker. Cho “Mata” Se-hyeong uniting with Kim “Deft” Hyuk-kyu to form a great KT duo lane. Even their sponsors are rival Korean phone companies—hence the name “Telecom War.”

But so far this year, the War has not lived up to its potential. Not that the two teams haven’t given us fantastic games. We’ve seen crazy fights and amazing comebacks from these two, including a series in the spring that was lauded as one of the best regular season matches ever.

The real problem is that the teams have played four times in 2017—including once in the playoffs—and KT has yet to pick up a match win. What will it take for them to finally beat SKT and make this a rivalry?

Fortunately for KT, they have not seen SKT as vulnerable as they are now. SKT’s uncharacteristic four-match losing streak is over, but their recent wins have come against bottom-tier teams.

Against the best, SKT has been strangely mortal. They are only 4-8 in games against the top three teams—KT, Longzhu Gaming, and Samsung Galaxy. SKT’s players have admitted to a lack of focus around their solo queue practice, and while things should be turning around, KT will be a big test.

How long will Peanut last?

The losing streak spurred some roster shuffling. Peanut was frequently subbed out for Kang “Blank” Sun-gu, but even Blank’s 20-game win streak was ended by Samsung.

The team has recently re-committed to Peanut, but it’s highly possible we’ll see Blank again if Peanut loses. That puts a ton of pressure on the young, happy-go-lucky Peanut.

A shuffle in the top lane

The other player that has been subbed out is top laner Heo “Huni” Seung-hoon, and he seems to have lost his spot permanently in favor of Ui “Untara” Jin-Park. Both players have been extremely inconsistent in lane, dying to easily predictable ganks and showing a shocking lack of map awareness.

But after the lane phase, Untara has been the steadier split pusher. Huni is always itchy to teleport into fights, and while that can save SKT, it’s a problem when both he and Peanut like to play fights aggressive to the point of recklessness.

Huni is second in the league among top laners in damage, but he is also third in death percentage. Untara is near the bottom in both categories.

Subbing out Faker would be lunacy, and his performance has stabilized after a rough opening stretch. But at times, you can almost feel the pressure Faker’s under. Sometimes when the side lanes lose, Faker will start pushing up extremely aggressively, trying to solo-carry games.

That leads to a lot of deaths as teams have figured out that camping Faker can keep the rest of SKT at bay. KT will need to bring multiple people to the mid lane, as Faker has owned Heo “Pawn” Won-seok over the last several series. Pawn staring at his screen in resignation has become a somewhat common site—KT has to prevent that from happening.

Focusing on their strengths

Pawn’s lane is KT’s weakest—and against Faker, that sounds like a death knell. But it doesn’t have to be. KT just have to prop him up in smart ways.

Part of why KT has looked better recently is a refocus on their solo lanes. Their bread and butter is for jungler Go “Score” Dong-bin focusing on Smeb’s lane, getting him ahead on snowball champions like Renekton. Oftentimes, that leads to three-man parties in the mid lane where Score and Smeb gank for Pawn.

Untara has played decently, but a lot of times he’s just a split pusher. Smeb is good enough to abuse him while still impacting the rest of the map. It’s a bit counter to how many League teams are playing, with a focus on supports roaming to the mid lane. But it works for KT because of the immense pressure Smeb can exert on his own.

The attention that Smeb gets means the duo lane is expected to be self-sufficient. Before the season, the major question about KT’s roster of superstars was that of resource allocation—who would get the most of Score’s time. The answer is Smeb, and it makes sense given his pedigree.

Playing without jungle attention sounds like a tall order, but it works for KT because Mata and Deft have proven that then know how to win lane by themselves. Deft leads in nearly every lane statistic despite that lack of attention.

Crucially, because Smeb exerts so much pressure on his own, he actually protects his bot lane in a way. It’s extremely difficult for teams to gank Deft and Mata when they know doing so concedes the top side of the map heavily. Not only is Smeb up to taking an early turret, but the priority around Rift Herald often means a two-for-one turret trade in favor of KT.

That means Deft is usually free to push his lane aggressively. In this particular match-up, KT may have an advantage over SKT. SKT ADC Bae “Bang” Jun-sik is amazing, but his partner, Lee “Wolf” Jae-wan has been more inconsistent. He has stuck to ranged supports in an era of initiators, and he’s one of the only ones playing Zyra still. A few recent games on Alistar went better, but if Mata can help Deft win lane and also roam with more impact, SKT could be in for a long night.

The final part of KT’s strategy has to be avoiding bad fights. For a team with an acclaimed playcaller like Mata, KT has found itself in multiple bad situations against SKT. On numerous occasions—most recently the second game of their last series—KT has thrown away a significant lead by taking terrible fights.

That play isn’t an SKT win—it’s a KT throw. They secured the Baron. There’s no reason for Deft to kite into Bang, thirsty for a kill, burning Mata’s ult in the process. There’s no reason for Score and Pawn to re-engage when both have tools to get out of the back of the pit. Deft even misclicks, killing the blasting cone which was his only method of escape. When Smeb finally went down, SKT ran for the KT Nexus and got it.

But even those micro mistakes gloss over the fact that KT never should have rushed Baron in the first place. Look at the map: They have the SKT mid inhib down, but the minion wave in that lane is still pushing for SKT. Rather than resetting, letting their huge top wave crash, and forcing Untara to burn his teleport on a Baron bait, they burned their own teleport. Even that was to a location where Smeb was on the other side of the fight, away from the carries. What the hell, KT?

The setup was so catastrophically bad that it’s crazy that KT even got the Baron. They were so afraid of giving up tempo against SKT, so afraid that SKT might rush the Baron themselves had they backed, that they panicked and gave up the game. They could have played the map. They could have done what SKT themselves do so often—bait the enemy team into taking the objective and taking the teamfight, a strategy they adopted to dethrone Samsung a week ago. Instead, they lost in a cacophony of boneheaded decisions.

Maybe that’s the mental block that KT have—even when they are winning against SKT, they feel as though they can lose. Nearly everything else is set up for them to finally beat Faker in the rematch on Thursday morning. The last thing they need is to believe that they can.