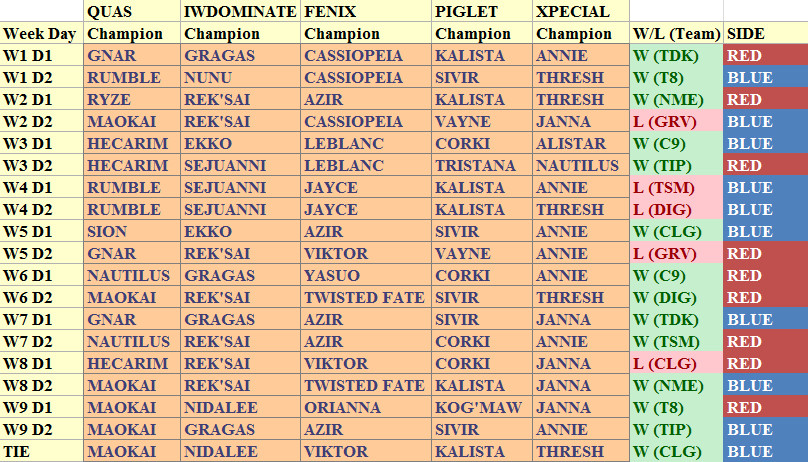 I could talk about the quarter finals match between Team Solo Mid and Gravity but the series is looking to an underwhelming set of games. Instead I figured it would be interesting to look a bit further ahead and look to Team Liquid. Team Liquid has finally reached that first place finish that they have been striving to get for a long time and not only did they secure the 1st place seat for regular season, they did it with a dominating record of 14 wins, 5 losses. This time around let’s take a look at what makes Team Liquid strong and how they can be exploited.

The first thing I want to start with is Team Liquid’s fantastic win ratio of 14 wins, 5 losses or a 73.68% win rate. It is pretty high but North American LCS is a best of one round robin that meets twice. A best of one format neither tell us how teams will adapt in long series of games nor does it give us a strong indication of how well a team will do against a specific team. What we can tell is a bit of a play style, champions, communication and so on.

Here I have a spreadsheet with the first row being the team composition, the outcome, the team Team Liquid was against and the side. Directly below this is another spreadsheet that summarizes the win rate of each champion each player played. A huge strength for TL is their ability to play multiple types of champions very well. For example, if you look at Fenix he can play control mages like Azir and assassins like Twisted Fate. Azir has even become one of his signature champions for play making after that godlike 1v4 Quadra Kill he had against CLG in week 5. Honestly it was more of a mistakes from CLG but good on Fenix for capitalizing on it. Champion diversity does not just speak to a player’s individual skill but it also gives your team many options. TL can create a variety compositions from controlled team fights, peel for the hyper carry, poke, to rotation compositions. This variety in champions allows TL to adapt to different styles in where they put their carries or the compositions they play. The last thing I will bring up about the champion pool is that Champions that TL has negative ratios on are not necessarily champions that they are bad on. When TL played Jayce against TSM in Week 4 Day 1, TL were in control for most of the game but failed to prioritize the correct champions. That is something we will go over in weakness.

Another one of Team Liquid’s strengths I would say comes from outside the game. Their preparation shows really well when they get into game. They always seem to get what they want in their drafting phase. TL have crushed P&B so hard that Piglet has been able to play Sivir and Kalista in 11 out of 19 games. When you look at Sivir and Kalista being those top tier marksman picks, it is completely absurd to see someone as skilled as Piglet to get these two champions. It also shows the skill of his teammates as well to draw bans to allow Piglet to get these top picks. Another scenario of this (but less absurd) is Fenix still being allowed to grab Azir. It has become his best champion and the fact that he got five games on it late in the season is surprising. TL also has the level of coordination to make a strategy for a game and stick to it. They always look to make the first move. (Thanks to the stats from Oracle’s Elixir) Even though they have one of the longer average game times in NA LCS, they have a lot of firsts. In their games they get first tower and first dragon 63% of the time. They are also the highest in tower kills per game at 8.2, first baron rate at 78.9%, average dragons per game at 2.6 and an average gold difference of up 1069.4 at 15 minutes. Just from these stats alone you can see that TL is the type of team that knows what they want and how to get it. You can see an example of this in TL’s latest game against TIP where they had a very clean four for one dive bot lane around the 11 minute mark. The game goes on for a little bit where TL just wins fights and gets objectives and has this dominating lead that leaves TIP scrambling around looking for answers. When this team gets going it becomes very hard to stop them.

Previously I wrote that Team Liquid always has a game plan they stick to in game. Unfortunately, this can work against them. Team Liquid’s biggest problems actually come from their strengths: we often see TL get so far ahead that they play too cocky, lose the lead and fail to change their win conditions. The most recent example is the game against TIP in Week 9. Even though TL won, we saw them throw by having both Piglet and Fenix positioned in front of their tank line trying to get the third inhibitor. This particular over-extension led to both Piglet and Fenix dying at the start of the fight and gave TIP a chance to comeback and almost win the game. They later failed to adapt to a new win condition like playing for five dragons as their early to mid-game composition was starting to lose to TIP’s late game composition. TL kept trying to force the nexus towers and Fenix kept getting caught and killed in TIP base. Instead of trying to force the nexus turret they could have gone for Dragon 4 before and started the fifth dragon timer sooner and put TIP in a position where they would have to fight or lose to the timer. TL should have realized that their original win conditions and power spikes had been lost and that they needed to put TIP on the back foot in order to win the game. Another example of this failure to adapt in-game is the loss TL had against TSM where they failed to recognize that their win condition was to kill Bjergson in fights. This failure to recognize what they need to do to win could easily give over games in a playoff match. I would guess that this problem comes from mixed communication where the players each have their own ideas on what they need to do when they fall behind.

Team Liquid, when they do fall behind, tends to overkill enemies or objectives. This problem does not usually show itself unless the first problem happens. This problem is seen a tad bit in TIP game in Week 9. Xpecial had Annie ultimates that hit two people of the back line but could of hit three. Team Liquid used too many utlimates on Gate when all of TIP was gone and having some of the extra ultimates could have been used to end the game. These type of over hyped plays might actually end up costing them if they cannot learn to communicate new priorities in game properly. Fortunately, this seems like an easy fix and hopefully will be resolved before playoffs.

I would say TL’s most likely match up would be TSM because they have more experience in a best of 5 compared to Gravity but TL could also play Gravity as long as they stop tilting. TSM and Gravity have looked very weak in their last two games. If we look at both excel spreads you can see TSM and Gravity have only gotten a recent win on a poke compositions against lower tier teams. It took TSM around 50 minutes to beat NME the 9th place LCS team. With that in mind it looks like TSM and Gravity won’t be able to put up much a fight if they can only play one composition against TL, a team that has multiple champions they can play. My prediction if TL were to play TSM: I would say TL would take it 3 – 1 and if they played Gravity, TL would take it 3 – 0. The one good note in all of this is that TSM and Gravity will have a lot of practice time to fix their issues.