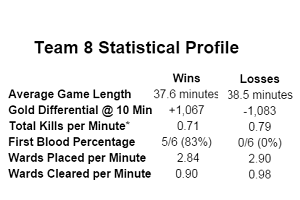 Team 8 seemed to enter the North American LCS as “Calitrlolz and friends”, riding the hype wave of their carry-oriented, pharmacy-school-deferring top laner. They had some success with “wombo combo” compositions, most famously landing an incredible Malphite+Orianna combination against Team Impact, but struggled to expand their strategic range.

In the past few weeks, though, strong performances from jungler Porpoise and mid-laner Slooshi have showed that Team 8 is developing some diversity in not only their team compositions, but also their carry threats.

Let’s take a look at a statistical profile of Team 8 through the first six weeks of the 2015 Spring Split.

Based on past performances, Team 8 has a good chance to win if:

Team 8 has never given up first blood and won, and in their wins they average early gold leads at 10 minutes, compared to 10-minute deficits in their losses.

They play the map

In Team 8’s wins, there have been fewer total kills (their kills + opponents’ kills) per minute. Team 8 should try to avoid constant skirmishing and team fighting and look to use their lead to play the map.

In their wins, Team 8’s much-hyped top laner has taken the team on his shoulders, doing nearly a third (31%) of the team’s damage to enemy champions. Slooshi has also contributed more damage from the midlane in Team 8 wins, reducing the team’s reliance on their AD Carry as the main damage source.

Team 8 will put themselves in a tough spot if:

Looking for more statistical analysis and insights from the NA LCS? Let me know which team, player, or specific statistic you’d like to see broken down by leaving a comment.