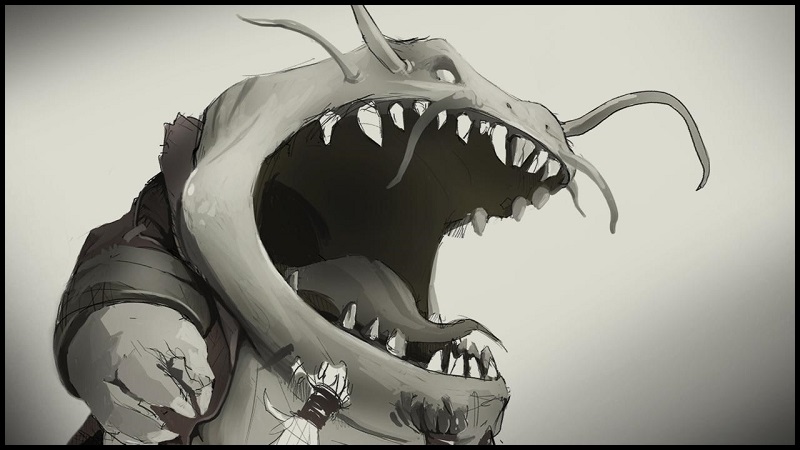 As I sit and listen to the western-style theme of Tahm Kench, I can’t help but feel the character itself catches you off-guard. At first, a gentleman, charming and kind — all too eager to make your dream comes true. But then, his true nature is revealed showing an insatiable appetite born of the desire to feast on the inner demons of mankind.

Wielding demonic powers and a lethal silver tongue, this embodiment of inadequacies is an incredible utility support, capable of frustrating the enemy and providing ample opportunities to his team with his unique kit. Though of course this ‘fish tank’ is not just limited to the support role, capable of playing in the top lane as well.

Here, it seemed appropriate to examine The River King and see just what the verdict is on this wandering demon, and additionally look at the potential he has in competitive play.

Let’s preface the analytical portion of the article by saying: Tahm Kench is annoying. Never have I seen so much ability to troll or influence your allies in a game. While in the wrong hands, the kit appears to be a rather negative one, in the right hands there’s no doubt that a skilfully played Tahm Kench could absolutely be an impressive, defensive-orientated support.

I say defensive-orientated because once we begin to delve into his kit, it becomes evident that his real strengths are executing and surviving ganks.

The passive, An Acquired Taste, causes Tahm Kench’s basic attacks to apply a stack (in the form of a fish that changes colour from blue, to yellow and finally red). Upon applying three stacks, The River King’s Tongue Lash is enhanced and Devour is enabled for use on that particular opponent.

Tongue Lash is a direction-targeted ability (or skillshot) that’s pretty standard, although it applies a useful slow when it hits. With a decent cooldown and relatively low mana cost, it provides good harass in lane while also stunning after three stacks of An Acquired Taste have been applied to an opponent. It’s not always optimal to Devour a primed target, and it’s in these situations that the ability to utilise Tongue Lash for a 1.5 second stun is most useful.

In addition, Tongue Lash synergises with Devour, with the combined spells allowing for Tahm Kench to gobble up minions or monsters from long range. This can be particularly annoying for the enemy when contesting Rift Scuttlers or monster camps (although Epic Monsters and both the Brambleback and Sentinel are not to The River King’s taste) as an example.

Devour is a new mechanic to League of Legends, unique to Tahm Kench’s kit. It has three basic functions — you can Devour allies, enemies and monsters / opposing minions.

This is perhaps his most fun ability, whilst simultaneously being his most annoying. Whether ally or enemy, a poor Devour can backfire severely on Tahm Kench, costing his team a kill (by denying a last hit) or removing someone from an environment where they can still contribute. This ability requires tremendous communication and game sense to use to the fullest extent, and is going to be most useful to the player during ganks, or kiting away from the opponent when being aggressed upon (scooping up your ally gives you a nifty speed boost).

Of course, eating your enemy is a little bit more difficult, but still relatively easy if they’re devoid of escapes. A couple of auto attacks with rather long range (200 is the longest for any melee character in the game) and a simple Tongue Lash followed by Devour could see your enemy trapped in the darkness of Tahm Kench’s stomach. The reduced vision puts his victim at the mercy of The River King’s team, however the slow does act as a trade-off for the significant advantages the ability offers when used in this fashion.

It should be noted that while you can flash with an ally in your belly, saving them from a potentially horrible fate, you cannot do so with an enemy. Oh, and it does a surprising amount of burst.

Thick Skin is an interesting and unique take on how shield mechanics work. The ability stacks grey health (which basically the damage received), and the passive activates and turns said grey health into a percentage of actual health after leaving combat.

The active is the interesting part, where you can instantly transform your lost health into a massive shield, in some situations allowing for extended tower diving early, while the ability supplies Tahm Kench with one of the most dangerous baiting tools in the game.

And last but not least in our foray into Tahm Kench’s kit, is his ultimate: Abyssal Voyage. This is a pretty simple ganking tool where we’ll likely see supports move to stand on pink wards, meet up with their jungler and gank as a result. It’s not hard to predict and it’s quite telegraphed, so there isn’t much to say about this ultimate. It’s a Rek’Sai ultimate for two people.

There is one important point to make though: It is on the onus of Tahm Kench’s teammates to know what their role is in regards to his ultimate. Are you squishy? Do you lack hard crowd control? If yes, then don’t jump into his mouth when he uses Abyssal Voyage. If a marksman is transported into the middle of the teamfight when The River King and Sejuani had a fantastic plan to engage, not only do you cost the team the fight, you’re using Tahm Kench incorrectly.

This support is one where it’s extremely important for the team to know how to utilise his abilities. Which may be, in part, why his win rates are so low. However, we’ll discuss that a little later.

Based on the points we’ve discussed in his kit, we can summarise the major elements of the game where it’s relevant. Firstly, Tahm Kench’s laning phase; he primarily wants to play reactively, especially against aggressive lanes where he can take advantage of his Devour to save his laning partner — even focusing him becomes a little more difficult thanks to his Thick Skin and movement speed enhance when an ally is in his belly. As far as defensive laning goes, this latest addition to the League of Legends roster is certainly the King.

Of course, calculated offense is also on the cards when against passive lanes, although lacking any easy-to-apply hard crowd control, you probably won’t see many confident all-ins with Tahm Kench unless someone is ganking with him, at least as far as winning an even lane goes.

Everything after laning phase is pretty similar. Tahm Kench’s gameplay shifts to being focused around using his ultimate to create an artificial alternate for flanking or if The River King and his buddy are strong enough, you can dive straight into them and initiate a hard engage. This is one aspect of Tahm Kench’s endgame job; the other is to save his teammates when they get caught.

Conversely, this is done by Thresh in a similar manner from a great distance away, however the difference is that Tahm Kench can use Devour on allies that have been locked down, offering them an escape where there may not have been one previously. In many respects a team with Tahm Kench top and Thresh at support could be a temporary solution to recurring positioning errors, so keep this in mind and take it with a grain of salt. Mistakes are still mistakes, even if you manage to succeed while making them. Be sure that you can differentiate between a team utilising vision and earning a pick, and being gifted one through poor play (of their opponents).

So, the topic everyone is excitedly debating: how much potential does Tahm Kench have in the competitive and professional scenes?

Well, in theory, the answer is a lot. We’re talking about a champion that can execute extended tower dives, save people from permanent lockdown, and execute team ganks from insane range. There are however, obvious downsides. Firstly, a well organised team can just burst the ‘fish tank’ and deny any opportunity for him to use his abilities, although this is made difficult by Thick Skin. Additionally, players in general don’t seem to grasp how to play around this champion just yet, although solo queue is a chaotic environment at best, professional players have a 37% win rate in 27 games on the champion (10 wins / 17 losses; in addition, Tahm Kench has a 39.2% win ratio in all regions, that’s the lowest win rate of any champion in the game). Those figures should be taken with a grain of salt, but it’s hard to discern if the champion requires buffs, or alternatively, if it’s too hard of a concept for solo queue teams to understand teamwork.

Given how likely the latter is, it’s probably not worth talking about adjusting his power until we see the champion (or don’t see him) in professional play. Back to the original question though, he has a lot of rotational value, plays a classic and enticing tune, and is a man of fine class and distinction.

While simultaneously a demon eating the tears of marksman players who constantly get 4-man ganked. This champion is the support spirit animal of Christopher “MonteCristo” Mykles.

Jokes aside, the champion seems to follow relatively simple build paths, and in terms of skill order, Tongue Lash and Devour seem interchangeable, with neither one really being shown as preference at the moment.

It seems no one has really figured out The River King yet, but an exciting prospect has come to Summoner’s Rift. Teams with strong rotational play and heavy ganking priority will find success with this charming devil, but by the same token if your favourite team runs mostly siege compositions, don’t expect to see him anytime soon.

This champion is fun, unique, and troll as hell. The River King is here, ladies and gentlemen. And whether you play in top or support, prepare to frustrate the opponent with some of the most innovative yet irritating abilities ever seen in this fine establishment.

Nothing to worry about though, after all, “misery has a delectable taste.”

With thanks to leagueoflegends.wikia.com, lolking.com and probuilds.net for ability information and win rate statistics, respectfully. Credit to Riot Games for the images.

Written by Mitchell “Zeju” Smith, who is sublimely happy that there is now a champion that you can troll with on a near spiritual level. Just eat the marksman and flash into five people.