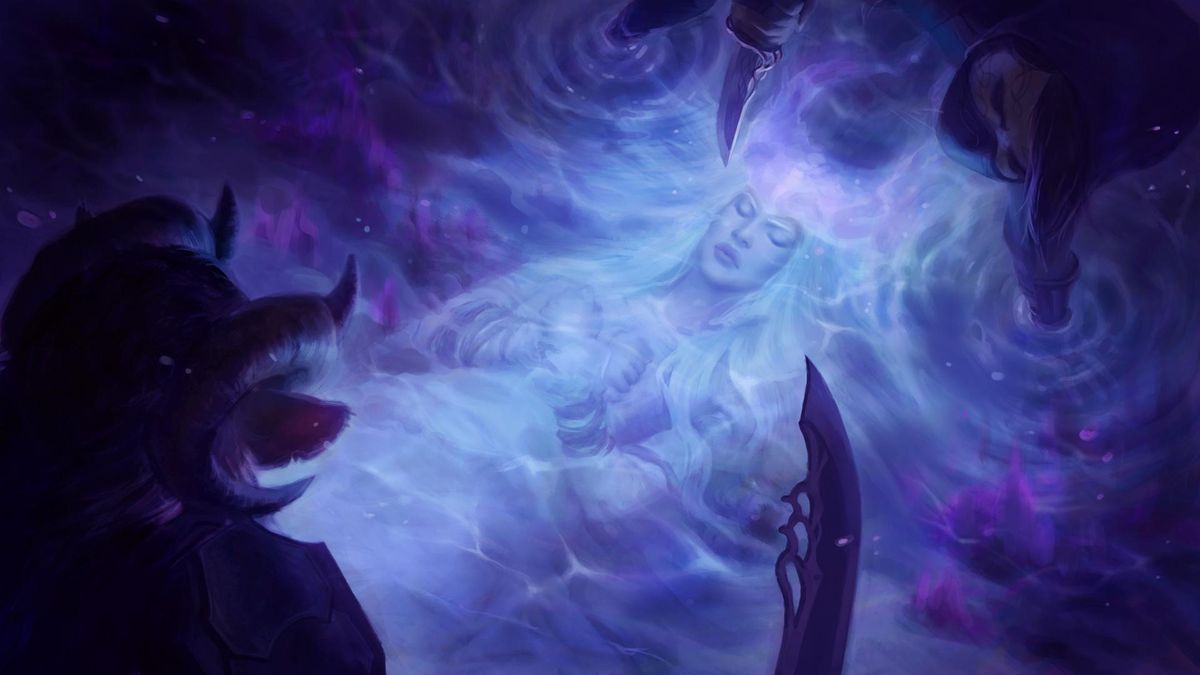 Riot published a brand-new lore-packed story about Syndra today on Universe, League of Legends’ one-stop-shop for all things lore, including comics, stories, and more.

The story, called The Dreaming Pool, was a frustrating read, but not because it was poorly written. Syndra, we think, was meant to be the focus of the story. She’s held in an Ionian prison of sorts, a pool of water that holds her in a deep slumber, unable to wake up. She was trapped here by her own Ionian kin after causing wanton destruction to a temple, in order to contain her and her immeasurable power.

While trapped in this pool, which definitely isn’t a ripoff of The Legend of Zelda: Breath of the Wild by the way, she’s forced to relive the same dream over and over again—a memory of her childhood where her dark, twisted powers first awaken and desecrate the landscape.

Despite getting this insight into Syndra’s origin, she isn’t the character we ended up caring about at all, and that may have been the intent of the story altogether. The real story is about a Vastayan cat-man named Kalan, despite him being the focal character who’s probably talked about the least throughout the story. This Vastayan is a Noxus turncoat. He’s hated and reviled by his Ionian and Vastayan kin for jumping ship to join the invading forces and Swain, and he’s stationed at the fortress built around the Dreaming Pool.

The fortress was built many years ago by Ionians to protect the pool and prevent Syndra from awakening. After all, she’s probably the Ionian equivalent of a nuclear bomb, and she’s also a very angry person to boot. Kalan is stationed here as the fortress-city’s governor—a station, we find out, that he requested, despite its lacking glory and quite desolate location.

He’s here when Ionian ninjas invade the fortress with the sole intent of killing Syndra in the pool to end her threat to the land altogether, even if they die in the process (and almost all of them do). One of these ninjas, Sirik, is the primary protagonist of the story, or so we think. She’s very zealous, and she used to be a guard at this fortress while it was still under Ionian control. She wanted to kill Syndra to end her threat back then, and she’s back to finish the job for the better of her land, with no intent of escaping with her life afterward.

After making her way through the base with her merry band of ninjas, including her brother, they arrive at the pool. There, her brother and a few others reveal themselves to be traitors, with the intent of waking Syndra and convincing her to join them in their war against Noxus. A fight breaks out just as Kalan catches up with the group. Sirik fights Orik and Kalan, Kalan fights Sirik and Orik, and the random ninjas inevitably die, because who cares about them.

It’s during this fighting that Syndra wakes up to the sound of Princess Zelda telepathically asking for her help. Just kidding, she actually wakes up to the feeling of Sirik trying to stab her in the face. Syndra gets up, forms a badass crown made of pure energy around her head, and kills Orik—the guy who was trying to use her to win a war. As it turns out, she hates her Ionian kin just as much as Noxus, so his proposition to her didn’t exactly sit well.

As revenge for keeping her in containment for so long, she forces Kalan down into the dreaming pool, trapped. We then find out who the real hero is—him. He was given a choice many years ago: To win a fight for his Ionian brethren and be labeled a hero, or join Noxus, label himself as a villain hated by his kin and even his own children, but be stationed here—because this is where he could keep watch over Syndra and protect his people, even if they hated him.

He would never see his children again, he was branded as a traitor, and now, he would be trapped for all eternity. The worst part is that he signed up for all of that, knowing that he’d be able to (attempt to) protect Ionia and his Vastayan family under the guise of Noxus.

So, at the end of the story, Syndra flies off into the sunset after destroying most of the fortress, and we’re left wondering why we didn’t have more time to get to know Kalan. Kalan, the true hero, isn’t a champion in League, and this is probably the first and last time we’ll ever hear of him again. The worst part? He’s probably more interesting than 75 percent of the champions in the game or characters Riot has written about in the past.

That may have been the goal of the story, but, man oh man, what a bummer.