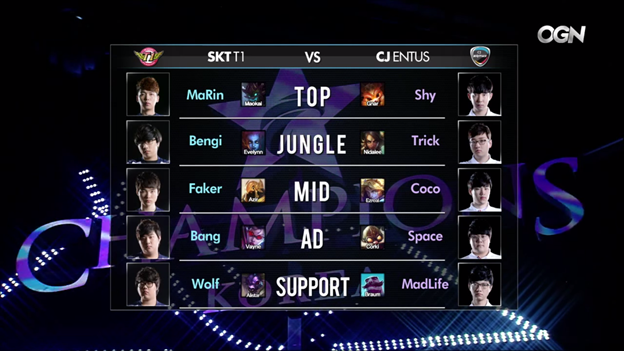 Nothing is eternal in League of Legends. Champions come and go bans with the tides of buffs and nerfs, players join and leave organizations in the off season, and the balance of power shifts between competing teams. On July 24th, the undefeated reign of SK Telecom T1 was brought to an end by the hands of CJ Entus. It came as a shock; CJ Entus were tied for fourth in the standings and SK Telecom T1 were beyond the rest of their competitors. So how did the heretics of CJ slay the Gods of SKT?

Tricks in the Jungle

Instead of fielding Kang “Ambition” Chan-yong, CJ Entus ran substitute Kim “Trick” Gang-yun in the series. CJ had been experimenting with their substitutes, and it seems to have been benefitting them.

When Bengi forced Trick to farm his upper red side jungle, Bengi ganked the mid-lane with Wolf for a kill on Shin “CoCo” Jin-yeong. Falling behind, CoCo was continually slaughtered by Lee “Faker” Sang-hyeok’s Azir and Jang “MaRin” Gyeong-Hwan’s roams on Maokai, losing his two middle towers within minutes of each other. Trick was unable to help—Nidalee’s poor gank initiation and the vision from Bengi and Wolf corralled the cougar as they pillaged the jungle.

CJ would not make the same mistake next game, as they immediately claimed Rek’Sai for Trick. The payoff was incredible: against Bengi’s Gragas, Trick now had the counter jungle pressure with his Tremor Sense. With a five man invade, CJ were able to spot SK-T’s lane swap and match it, keeping Wolf in lane instead of roaming. At four minutes, Trick positioned at SK-T’s raptor cap, and with a tunnel he forced both summoners off of Faker. CJ capitalized on Faker’s vulnerabilities two minutes later with a three man dive onto Faker.

In the first game, CJ Entus locked in the low-wave clear AP Ezrael mid and had no jungle pressure from Nidalee. SK-T’s roaming pair took over the map in the lane swap, giving them steady control throughout the game. In game two, CJ adapted by picking up CoCo’s stellar Azir to gain control of the mid minion wave, securing Trick’s Rek’Sai for early pressure, and successfully scouting the lane swap to prevent Wolf’s roaming. This allowed CJ to control Faker’s Viktor and become the first team to defeat it.

Game two was comfortably in CJ’s hands, namely because of miss-positioning by SK-T. Without Wolf’s roaming, SK-T’s vision control slacked while CJ’s remained steadfast. This lead to several members, primarily Wolf, to be caught out in their own jungle. This was consistent in both games where SK-T did not get a lane swap, suggesting that it’s a shortcoming of the team.

SK-T further erred by not paying respect to Park “Shy” Sang-myeon’s Shen ultimate in game two. Able to shield his ally and join the fight across the map, Shy turned around every dive attempt SK-T tried. Perhaps unfamiliar with Shen’s ultimate cooldown or lacking practice against it, SK-T continually tried to make plays while the ultimate was up.

CJ utilized the Shen for engage particularly well. Shy would Stand United to enable CoCo to bisect SK-T safely, then smoothly chain the CC on SK-T’s isolated carries. It was CJ’s only engage; it was risky; it somehow worked.

SK-T got a little weird. Faker decided to lock in Twisted Fate, a champion he hasn’t played since Champions Spring 2014.  He would deal only 16k damage to champions in the forty minute game—quite low for a carry champion.

MaRin took Mundo for last pick and took smite instead of flash. This gave SK-T a composition that had a huge power spike in the mid-game, but tapered off in terms of damage later on. SK-T would have a hard time getting through all of CJ’s peel, especially with MaRin lacking flash, but CJ would also struggle to engage onto SK-T. Whoever got to the objectives first would have the advantage.

The game was a back and forth struggle. Once again in standard lanes, SK-T’s vision suffered, resulting in members being picked off. However, MaRin became a monstrous split pusher on Mundo, dueling a fed Shy throughout most of the game and stealing camps away from Trick. The advantage never translated to the team fights though.

SK-T’s over commitment lead them to nasty situations. At 17 minutes Faker flashed between mid towers to kill CoCo, but then fed Shy. At 20 minutes, Faker ulted to CJ’s inner top tower to kill Shy, but Madlife saved him. CJ collapsed, claiming kills and a Baron.

SK-T held on, taking three towers and their third dragon when CJ took Baron. The teams fought on until SK-T was able to secure 5 dragons. Wolf looped around for the crucial flank, but pulled the trigger too early and missed Space with his headbutt. SK-T were quickly slaughtered, and CJ eviscerated SK-T’s base for the win.

CJ Entus deserve credit for playing to their win conditions and giving SK-T a run around from time to time. SK-T, on the other hand, showed some issues that will have to be addressed if they are to overtake rival’s EDG at worlds.