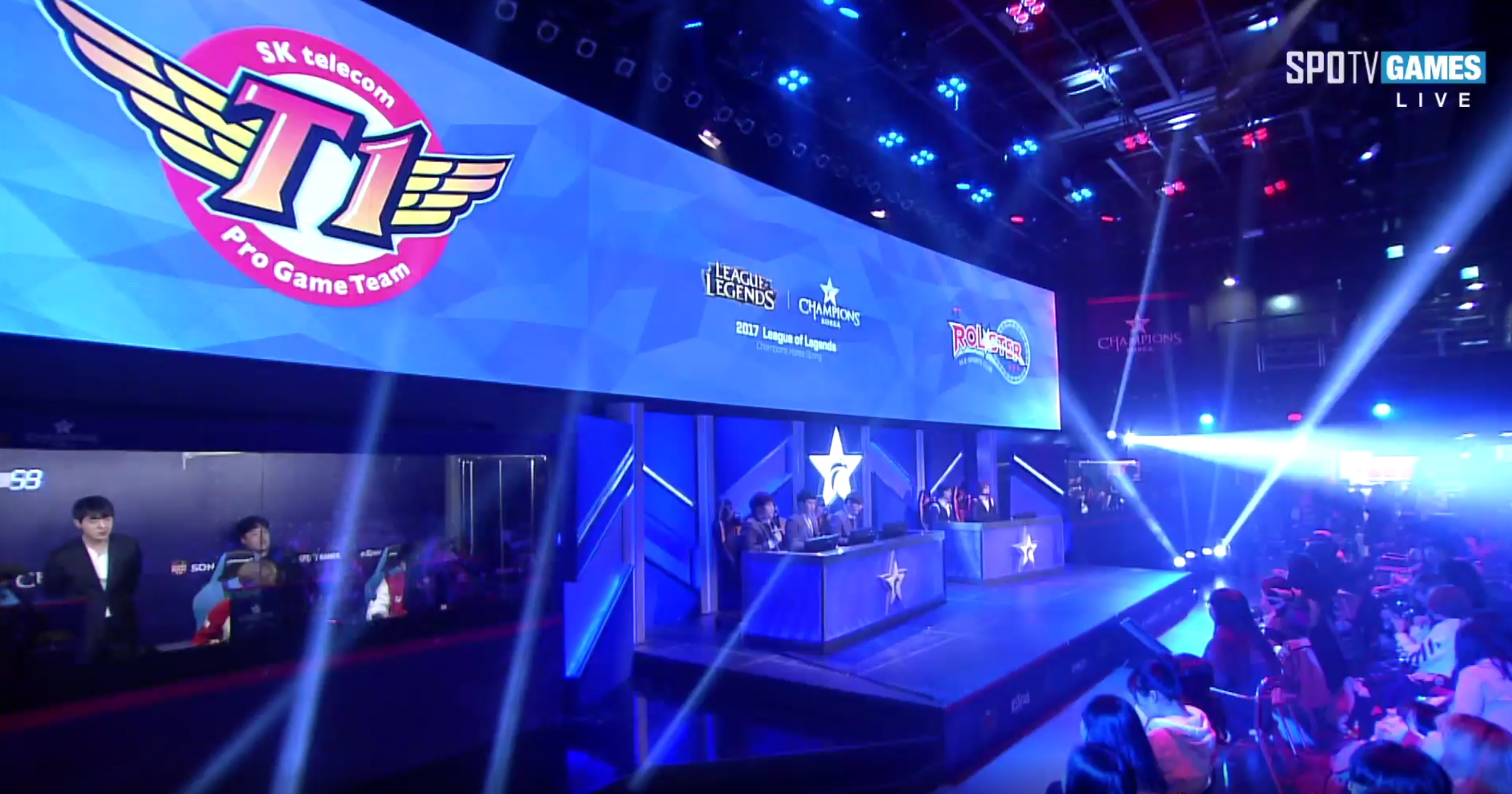 That’s the story of KT Rolster vs. SK Telecom T1. The force is KT, a roller coaster of stars, slapped together to produce maximum momentum. Like any coaster, there have been ups and downs, but they’ve always remained on-track for their ultimate destination: a showodown with SKT.

SKT is the immovable object. For years, Lee “Faker” Sang-hyeok and Kim “kkOma” Jeong-gyun have sat nearly unchallenged at the top of the region. This spring, they finished at the top of the regular season standings with a 16-2 record, including two crucial victories against KT. Those were some of the best series this year, making Saturday’s best-of-five match match one of the most highly anticipated finals ever.

The question for KT is this: Can they make it truly memorable, by winning, or will they once again be a footnote in SKT’s history?

Have they improved enough?

Fans who have seen KT play this year will recognize familiar patterns from their players. Their side lanes are immensely strong, particularly top laner Song “Smeb” Kyung-ho, who was rightfully lauded as the best player in League for much of last year. Their duo lane of ADC Kim “Deft” Hyuk-kyu and Cho “Mata” Se-hyeong returned from China to dominate the domestic scene.

Mid laner Heo “PawN” Won-seok can still suffer from bouts of inconsistency, and he dies way too often. His synergy with jungler Go “Score” Dong-bin is still an issue, mostly because Score doesn’t pay him much attention at all, preferring to get those side lanes ahead first. That can lead to plays like this:

Pawn’s problem’s will be exacerbated by the matchup against Faker, the de-facto best player in the world. Sure, Samsung’s Lee “Crown” Min-ho took the MVP award from Faker, but if anything, that is going to fuel Faker to destroy this matchup even more.

KT’s option, then, may be to rotate PawN out of that bad matchup as soon as possible and go all-in on the 1-3-1 split push. When that style clicks, it accentuates their strengths—up to three pushing lanes—and hides their weaknesses—poor macro and team play. Their semifinal win over Samsung was borne out by three pushing lanes that totally bamboozled their opponents—Samsung basically waved the white flag in the third game of the sweep by substituting out their duo lane.

Then again, the style that won them the series against Samsung is not going to work against SKT. Seriously, take the play book, burn it, and dump it into the Pacific, because the heavy banning of ADCs is not going to faze SKT’s Bae “Bang” Jun-sik, one of the best ADCs in the world. SKT doesn’t normally give their bot lane resources, but Bang and support Lee “Wolf” Jae-wan have proven that they can more than go even with Deft and Mata. Wolf’s laning isn’t quite as good as the top supports in the game, and he can be caught out on roams, but the SKT duo lane will not be surprised by KT’s draft strategy and are not going to roll over.

The more appropriate series to examine KT’s growth is their quarterfinal win against MVP. Superior vision and macro play allowed KT to extend in the side lanes, but mid lane was a disaster. KT required MVP to make mistakes and give them a tempo advantage and river control to set up a superior macro game. Even then, the teamfights were incredibly close, such that a single hit skill shot could have changed everything:

Again, this all came with KT having vision control and a superior comp. History tells us that SKT will not allow them to have both, maybe not even either. What to KT do then?

Is there any weakness in the SKT armor?

It’s fitting that, a few days before this final, SKT released new black and white uniforms. They are the closest thing League has to the Galactic Empire of Star Wars lore, and the uniforms’ stormtrooper-esque color scheme is perfect.

No matter who they have starting around Faker, it seems like SKT win the same way—they mostly go even in lane, winning matches where possible, but really farming things out until major neutral objectives come into play. And then, they fight you. Nearly always, they win. It seems like the more desperate the situation, the better SKT get at team fights:

KT was able to win some teamfights of their own in their two series against SKT. But overall, they are not on the same level as Faker and co. They still have a nasty habit of funneling in one-by-one and not setting battle lines. They can be punished for over-chasing and poor target prioritization. And it bears repeating—for years, nobody has been able to consistently match SKT in 5-on-5 teamfights. KT’s band of superstars may get close, but can they get close enough?

The usual strategy is to hit them early so that when those fights come around, a gold or drake lead (or both) can turn the tide. KT had some success punishing SKT for overextending in the early game. SKT’s new jungler, Han “Peanut” Wang-ho has gotten better and better at playing around Faker, but is known for flashy plays and invades. It will also be interesting to see if KT target-bans Peanut—his Lee Sin (9-0 record) is almost an insta-ban, but there may be more to that story when we see KT’s draft strategy.

The other obvious strategy would be to funnel resources into Smeb, something KT is comfortable doing. Smeb has had success against Heo “Huni” Seung-hoon in the past, but Huni more than carried his weight in SKT’s wins this year. SKT will likely ban SMeb’s Kennen, unless they have a specific counter-pick in mind.

KT’s obvious route to a win goes through winning the early game and then avoiding SKT’s engages as they patiently set up a 1-3-1. Three pushing lanes is the most basic League strategy, and it may serve a team that has issues in coordination and macro play to go back to basics.

But at the same time, SKT is so well-coached that they know how to handle a split push and how to deny KT the requisite vision to play long lanes. Even if things turn bad, they have subs that have proven themselves against KT. Jungler Kang “Blank” Sung-gu’s numbers jump off the page (9.2 KDA), and he provides a steadying presence, a perfect complement to Peanut’s ambition. Kim “Profit” Jun-hyung didn’t blink when playing against Smeb and provided strong teamfighting to boot. How on earth do you beat this team three times in five games?

KT knows what it’s like to beat the empire—they did it just last year in the LCK summer playoffs, albeit with a very different roster. But this SKT team is different, too. And that’s the craziest part—after three World Championships and five LCK titles, this year’s SKT may be better than ever.