DAMWON will move on to face Kingzone DragonX in the LCK playoff quarterfinals. 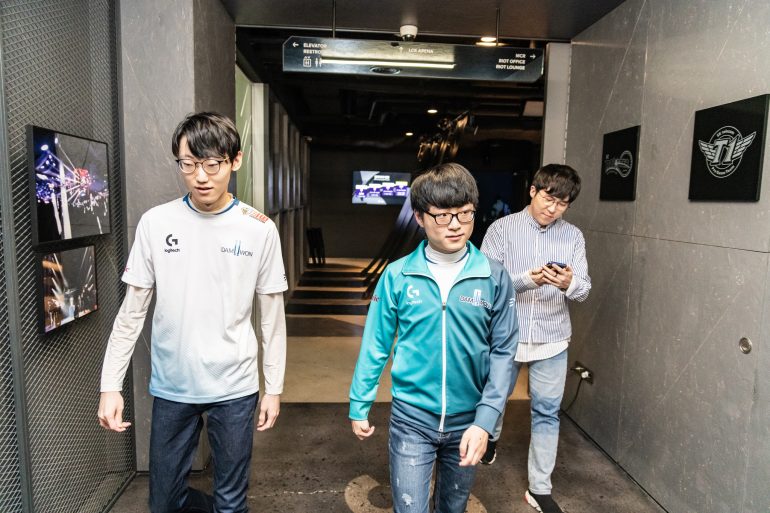 Denied the opportunity during their time in Challengers Korea, DAMWON Gaming and SANDBOX Gaming found their chance at a playoff bout in the LCK 2019 Spring Split’s wildcard match.

Led by the combined carry performances of solo laners Jang “Nuguri” Ha-gwon and Heo “ShowMaker” Su, today saw DAMWON find their first match win of the season against SANDBOX, and in the playoffs no less.

“Before the games today we really nervous since we’ve never taken down SANDBOX in the LCK,” ShowMaker said in his solo post-game interview, his reward after receiving the MVP title in both of DAMWON’s game wins today. “We were really working hard, since we didn’t want to lose to them again. We really wanted to win.”

Two teams that qualified for the LCK at the same time, and SANDBOX’s rivalry stems back to their days in Challengers Korea, with SANDBOX, then known as Team BattleComics, being the only team in C to take a set off DAMWON last summer.

And although SANDBOX got the best of DAMWON in their LCK regular season matches, DAMWON was in near full control of today’s playoff match, with ShowMaker and Nuguri outplaying their laning opposition. SANDBOX’s focus in the draft phase throughout today’s series was shutting down Nuguri. “Nuguri got so many target bans today,” ShowMaker said, though he later revealed that he and the rest of DAMWON weren’t worried since “Nuguri has an unlimited champion pool.”

In addition to what has become his staple pick in Ryze, Nuguri got to play the previously permabanned ultimate snatcher, Sylas, and proceeded to take over game two. Although SANDBOX drafted a composition with few useful ultimates for the Sylas to highjack, Nuguri still managed to become the strongest player on the map, finding multiple solo kills.

But DAMWON’s play was far from perfect, as noted in their game two loss which hinged on a couple bad decisions causing DAMWON to throw a game which looked all but won. “In game two I think we almost won it,” ShowMaker said. “Once we lost, we were all sad and exhausted, but our coach told us to take a bite of a chocolate bar, which got our energy back.”

Revitilized from the power of chocolate bars, ShowMaker and came back on stage and completely demolished SANDBOX in a quick game three . ShowMaker’s consistent damage output as Corki, coupled with beautifully executed Ryze teleport flanks were too much for SANDBOX, who collapsed after their first lost teamfight.

With their old challenger rivals defeated, DAMWON will take on another team they have yet to beat—Kingzone DragonX. “It will be really nice if we can take down Kingzone, since we have also never taken a set of them,” ShowMaker said. “Maybe this time it will be winnable for us.”

DAMWON will return to LCK stage for their playoff quarterfinal match against Kingzone on April 5.