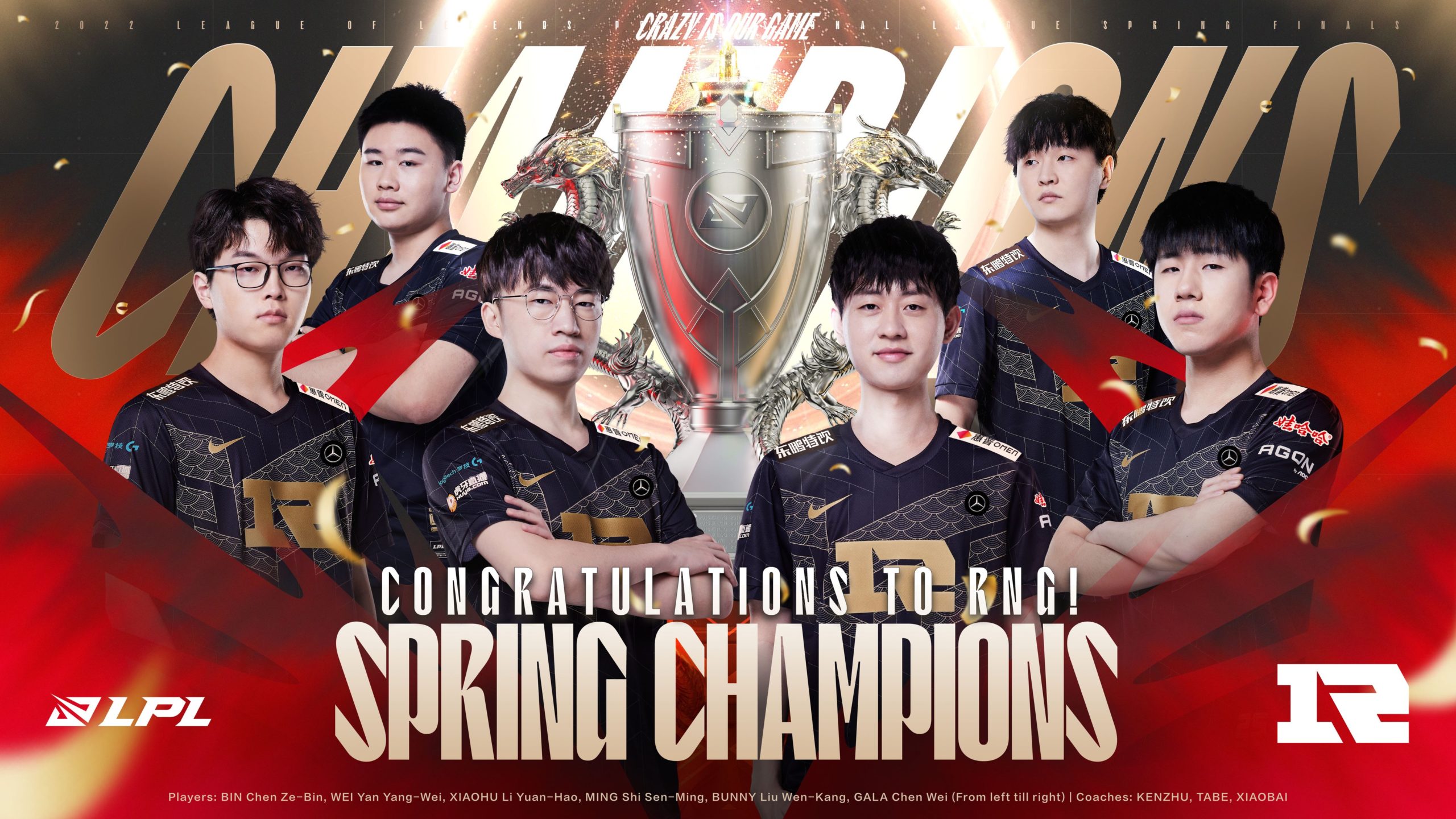 Royal Never Give Up will represent the League of Legends Pro League (LPL) at the Mid-Season Invitational (MSI) in Busan, South Korea, to defend their MSI title. The team punched their ticket to the competition after defeating Top Esports in a 3-2 series today in the 2022 LPL Spring Split grand finals.

TES had a slow start to their campaign this year and climbed their standings in the regular split. They warmed up after a cold beginning, though, and carved a spot in the playoffs. They defeated big names to make it to the top of the LPL, recently taking down the first-placed V5 in the lower semifinals of the Chinese tournament.

On the other side, RNG have been consistent with their performances and placed second in the regular season. They defeated TES 3-1 in the upper semifinals, but the squad came back for revenge and for a ticket to Busan after their victory over V5.

The first match’s early tempo was slow, with both teams gauging their opponents and trying to scale to the mid-game. RNG secured the first blood at the ninth minute and the teams traded blows, with RNG coming on top of a major teamfight to minimize the gold difference between the teams. Both teams had similar kills in the mid-game, but a game-changing fight near Baron turned RNG’s fate and gave them a sizeable lead in the match. Not even all dragons and the Mountain Dragon Soul helped TES, however, and RNG took the Elder Dragon and the game. GALA ended the match with a scoreline of 6/0/10 on his Aphelios to take RNG over the line.

The next match was similar to the first one, full of early-to-mid-game skirmishes in which both teams fought for every objective on the map. The match remained on a relatively equal slate until TES won a teamfight near the fourth dragon and caught some RNG players in the bottom lane, carving themselves an enormous advantage. TES snowballed their lead to get a Baron and looked to close out the match. However, RNG had different plans for them. They turned an unfavorable teamfight in the jungle and secured objectives like Baron and Dragon Soul to give them the edge. They pushed into TES’ base and brought the series to a match point.

Game three was do-or-die for TES, and they accepted the challenge. After the early-game skirmishes, they started securing objectives and making plays with Ryze and Hecarim ultimates to set up favorable teamfights. They didn’t let RNG come back into the match after that, and secured the Moutain Soul to further solidify their lead. TES scaled their advantage and finished the game with a flawless match from knight’s Ryze ending with a scoreline of 4/0/15 to keep them in contention.

TES started game four with solid momentum and had a nice early game to go with it. RNG tried to get some trades in the mid game. However, the objective control from TES was phenomenal and they stopped RNG in their tracks by stealing a Baron by Tian’s Viego to end the match by the 29th minute on the backs of Wayward and knight.

After the last two games, TES seemed high on confidence and looked to reverse sweep RNG in the grand finals. With Silver Scrapes running in the background, both teams jumped onto the Rift looking to secure their spot in the MSI 2022 and win the 2022 LPL Spring Split. Both teams punished every small mistake their opponents made early in the match, making for a chaotic early game. While they both had the same number of kills, RNG maintained a solid objective control by securing two dragons which helped them to secure a lead in the mid game. In the late game, RNG were comfortably ahead of their foes and ended the match to win the LPL 2022 Spring Split.

With the victory, RNG also punched a ticket to this year’s MSI in Busan, South Korea, in May. They will play remotely from China.