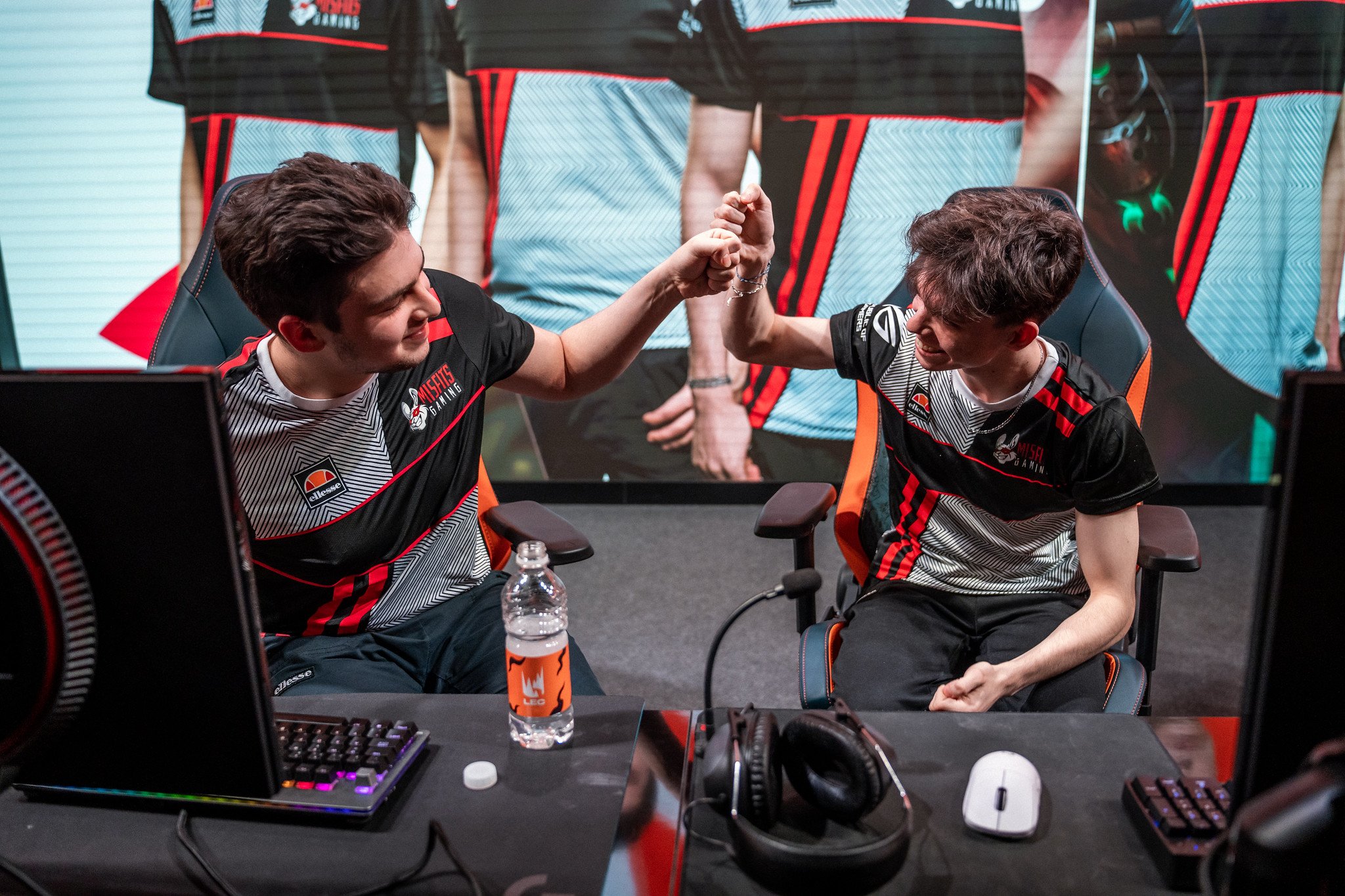 Throughout the many years of the League of Legends European Championship, several teams have cemented rivalries against one another, each hoping to call themselves the best team in the region. For Rogue and Misfits Gaming, meeting in this year’s Spring Split playoffs acts as yet another step in their long-standing rivalry, entering the fight as two of the LEC’s finest.

These two teams will start what is set to be an incredibly competitive playoffs, fielding the best lineups in the LEC as the bottom four from the regular season watch from the sidelines. While Rogue has multiple playoff journeys and victories under its belt in just the few years the org has been a part of the LEC, Misfits has not won in the playoffs since before the conception of the LEC—often qualifying but falling short in the early stages. Rogue even acted as the ultimate test for Misfits in last year’s Summer Split playoffs, meeting them in the first round and forcing them into a short-lived lower bracket run.

Both times these teams met in the regular season led to vastly different outcomes, but one constant held true: Rogue and Misfits have no intention of giving less than their all against one another. It’ll be this drive for success the teams possess that propels them through the opening match of the 2022 LEC Spring Split playoffs, but only one team can carry that momentum through the upper bracket.

Two consecutive Worlds visits, six playoff qualifications in four years, but no victories. Rogue continue to show the field of the LEC that, despite their infancy, they’ve been more than capable of toppling giants. This year has looked no different. Rogue kept a consistent hold on their grasp of first place in the Spring Split, even when minor hiccups forced them to reevaluate their progression.

Following Rogue’s successful 2021 season, the team opted to retain most of its roster, but at the cost of Hans sama and Inspired, two players pivotal to the team’s success that sought new ventures in the LCS. In their places came Comp and Malrang, each with years of professional League experience of their own, but with large shoes to fill that kept fans skeptical of how Rogue would continue to showcase themselves as a dominating force in Europe.

In the span of eight weeks, Comp and Malrang took the rest of the LEC playing field to their limits. They meshed immediately with the veteran members of the Rogue squad to secure what appeared to be an easy hold of first. Week after week, the fearless playstyles of both players, centered around the early game, shined against their opponents, allowing Rogue to once again maintain control over the bot side of the map and often use it as a win condition.

As Malrang continued to throw himself into entire enemy teams, he opened the door for the remaining members of Rogue to capitalize while forcing opposing teams to be fearful of anywhere they had no vision. In his debut split, besides ending in first place during the regular season, Malrang was named to the LEC All-Pro roster as the top jungler in the region, joining his top lane teammate Odoamne in cementing Rogue’s takeover of the region.

With these new players in tow, Rogue showcased a level of fearlessness the organization has never seen before that, while rewarding the team with plentiful victories, resulted in a few major missteps. Rogue’s first loss in this split was to Astralis, who at the time were 0-9, due to major miscalculations leading to overzealousness across all members of the undefeated team—marking their first and only 0-2 weekend so far this year.

From there, Rogue’s momentum seemed to shift, creating a closer fight for first place than the team may have expected in the first half of the split. Yet they remained neck-and-neck with Fnatic and maintained first place across all eight weeks of the Spring Split, ending with the highest KD of all teams in the LEC, according to Oracle’s Elixir, as well as cementing themselves as a powerhouse at all points of the game.

This mixture of new and veteran talent served to create an iteration of Rogue that looks comparable to the dominant rosters maintained over the last few years. Entering the Spring Split playoffs as the top seed may put a lot of pressure on this team, but the strides they’ve made throughout the organization’s time in the LEC may very well lead to these five players calling themselves Rogue’s first champions.

It’s been almost five years since Misfits ended a split in the LEC in the top three, and just as long since they won their last playoff series. With multiple new players in tow from around the various levels of competitive League in Europe, Misfits held their own over the course of eight weeks to once more enter the playoffs.

Yet with so much focus on the evolving rivalry between Rogue and Misfits at the top, as well as the performance of the superteam in Team Vitality, Misfits spent much of the Spring Split overlooked by fans and players alike. To many, this was a team expected to advance into the playoffs either through the upper or lower bracket, but not one to particularly surprise the playing field.

As Misfits continued to accrue wins, it became clear that their mid laner, Vetheo, would be pivotal to what would eventually become Misfits’ third-place finish. Week after week, the mid laner boasted some of the highest stats of all players in the region, from 55 to 100-percent kill participation per game to a total of 34.3 percent of Misfits’ entire kill count, according to Oracle’s Elixir, all the while boasting massive KDAs that made it clear he had become a vital win condition for the team.

Vetheo’s ability to hold his own against even the most formidable opponents in the mid lane, despite only a year of LEC experience, enabled him to progress into this role as one of Misfits’ main carries. With 11 unique champions played during the Spring Split, consisting of meta and unconventional picks, Vetheo repeatedly caught out off-guard opponents to allow Shlatan and HiRit to initiate seamless teamfights. Vetheo’s improved performance as the split neared its conclusion also earned him a spot on the LEC All-Pro team for the Spring Split, marking the only member of Misfits to be a part of that lineup.

Misfits’ victory against Rogue in week five seemed to reinvigorate the team that had ended every week prior with one victory and one loss. As Rogue maintained their aggressive playstyle, looking for map pressure wherever they could find it, Misfits demonstrated a calmness that starkly contrasted the style that had gotten them their six prior wins, ultimately headlined by the scaling between both Vetheo and new ADC Neon and bringing the two teams to a 1-1 head-to-head record.

Misfits once more showcased this new patient side to themselves in their match against G2 Esports in week seven, in which it seemed they had absolutely no way of coming back from a massive 13,000 gold deficit. Fortunately for Misfits, being able to maintain their composure offered them a possible path to victory: scaling. Between Vetheo’s Akali and Neon’s Zeri, G2 quickly lost hold of their lead, giving Misfits yet another clip in their Spring Split highlight reel and marking an upward shift in momentum that helped bring the team to their third-place finish.

Rogue and Misfits head into this first match of the 2022 Spring Split playoffs each with one win against the other. Yet since their first meeting, both teams have evolved into new versions of themselves, now solely focused on gaining hold of a playoff victory that would mark the start of a new chapter for both organizations.

Luckily for both teams, a loss this early on in the playoffs doesn’t end their run due to their upper bracket qualification. Instead, the team that falls will move to the lower bracket to face Excel Esports or Vitality, both of which Rogue have not dropped a game to this split, while Misfits have failed to take down the LEC superteam.

Using their most recent bout as a base, both Rogue and Misfits appear to be evenly matched despite the disparities in their rankings. Both teams went 2-1 in the final weekend of the season, falling to SK Gaming in what appeared to be overzealousness following impressive runs into week eight.

The playoffs take place on Patch 12.5, which is where the spring season ended. Therefore, not many changes have taken place to completely shift the meta, though the champions and strategies that shined then continue to do so now. Both teams’ junglers will likely continue to contest Hecarim, Xin Zhao, and Jarvan IV, while Jinx, Aphelios, and AP Kai’Sa make even more waves in the bot lane.

The jungle matchup between Malrang and Shlatan is shaping up to be one of the most pivotal factors in the way this game plays out. This will be the first LEC playoff appearance for these junglers, both of whom have capitalized on their freshness to the stage to make names for themselves in their debut splits, all the while taking their new teams to new heights. Malrang and Shlatan boast an impressive lineup of champions at their disposal, and when combined with the lack of jungle-centric changes this patch, there will always be a champion remaining for them to succeed on.

Should Rogue enter the playoffs not viewing Misfits as a significant challenge on their path to winning it all, Misfits may be able to get an upper hand on Rogue’s aggressive playstyle and hand them yet another upset loss. But if Rogue can exploit Misfits’ more recent change to scaling-focused gameplay with early map pressure, they can walk away with yet another accolade for the storied history of this organization. If they are to do so, Rogue will have taken down Misfits in two consecutive playoff series in the first round.

Fans can look forward to the 2022 LEC Spring Split playoffs beginning on Friday, March 25 with a battle between Rogue and Misfits.