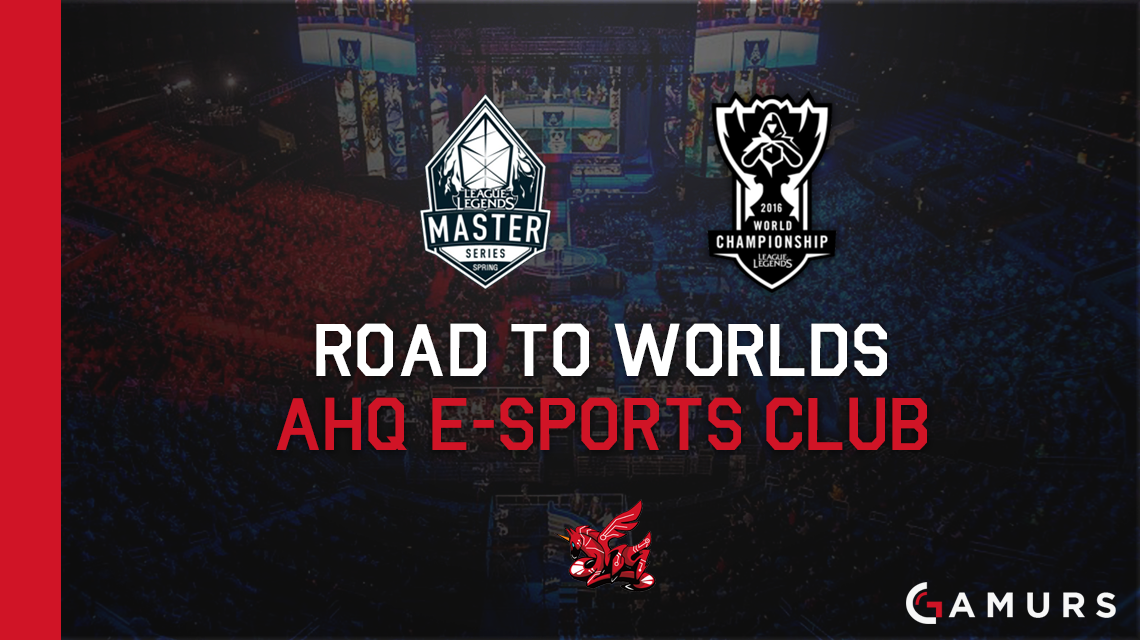 A GAMURS exclusive series, taking a look at the 16 teams going to Worlds from the beginning of their qualification and see just how their road to Worlds went. Today, we look at ahq e-Sports Club of the LMS.

ahq e-Sports Club (AHQ) had just come off of a top-eight finish in the 2015 Worlds in Europe after losing to Worlds winners SK Telecom T1, the same placement as fellow LMS representatives Flash Wolves, who had lost against European semifinalists Origen. Following their top-eight finish at Worlds, AHQ was looking to start well in the proceeding Spring Split with a place in the Mid-Season Invitational in China on the line.

The LMS consists of best-of-two matches over nine weeks and AHQ had a lot to prove going in. It would be known as AHQ’s strongest showing in the competitive scene, with Flash Wolves having been the powerhouse to overcome for the organization over the past few seasons, AHQ did not lose any series in the Spring Split to go on top of the table by registering an impressive win percentage of 89 percent, having 11 wins and three ties to their name by the end of it all; only losing three games out of the 28 they played all season.

This would take them into the Spring Playoffs as the first seed with a shot at reaching MSI 2016 as the LMS representative. It would be a long wait for the team to see who their opponents were, but of course, it was their old rivals, the Flash Wolves (FW), who would meet them to decide the fate of the LMS moving forward.

With such a strong showing in the season, AHQ were the favourites to win outright, but sadly it was not meant to be, as they were decimated by FW 3-0 with no shred of the same malice that lingered before. Flash Wolves would then go on to represent the region at MSI instead of AHQ.

A change in the wind

It would be an odd season for the LMS as a whole, with the Season 2 World Championship organization being bought out and rebranded into a fierce team called “J Team” and FW coming back from an impressive showing at MSI, where they clinched a top seed for LMS at Worlds over EU and the International wildcard. But, the stage was set for AHQ to push on and try to gain one of the two remaining spots for the LMS at Worlds.

We wouldn’t see the same dominant AHQ we had in the previous season, as AHQ was unable to pick up a single overall win over the Flash Wolves or the newly formed J Team, who were surging ahead to the top of the standings, becoming the Summer Split first seed by the end of it all. AHQ would be left in third place by the end of the season, just behind Flash Wolves after a flurry of missed chances.

This meant that AHQ had to go into the Sumer Playoffs for a chance at that all important first seed opportunity for the LMS. Hong Kong Esports (HKE) had a chance to set up a match against the Flash Wolves and then the superior J-Stars, who had just beat the Flash Wolves to the number one seed by a single point.

HKE would know the full on wrath of a determined AHQ, who won 3-0, finding their momentum to set up a familiar rematch against the Flash Wolves, but this time, fighting for a chance to play against J-Stars in the final.

AHQ would take the first game against their eternal rivals to start the series impressively 1-0. They would then again take the second game, leaving Flash Wolves on the pinnacle of dropping out and missing out on a chance to take the fight to J-Stars for that first seed.

But panic and dismay cost AHQ, as they seemed to fall asleep in the proceeding three games. Flash Wolves was able to fight back when all seemed lost and leave AHQ as the third place team for the summer season; Flash Wolves being the ones to advance to the final match against J Team.

However, this meant that AHQ had more circuit points than second place J-Stars, heading into the regional finals with everything to play for; the final LMS spot at Worlds was on the line.

Not the final we were expecting

Four teams would be attending the Regional Finals in Taiwan. AHQ was the first seed, J Star, having lost to the Flash Wolves, was the second seed, Machi E-sports was the third seed and Hong Kong Esports was the fourth seed. All four of these teams were going after that second spot in the World Championships in North America for 2016.

AHQ would quickly dispatch HKE 3-0 as they awaited to see who their opponent would be in the final match. The favourite J-Stars were a shoo-in to win in the minds of the fans, but would you believe that they lost to the third-seeded Machi resoundingly 3-2 to set up the final match between the two organizations.

However, it wouldn’t even be a contest, as AHQ won 3-0 to make it 6-0 overall in the regional finals. AHQ was able to re-find their form and head into another successive Worlds outings. The final roster is Chen “Ziv” Yi in the top lane, Xue “Mountain” Zhao-Hong in the jungle, Liu “Westdoor” Shu-Wei in the mid Lane, Chou “AN” Chun-an as the ADC and Kang “Albis” Chia-Wei as support, with even Wong “Chawy” Xing-Lei taking part after coming back from his suspension.

And that, ladies and gentlemen, is ahq e-Sports Club’s “Road to Worlds!”