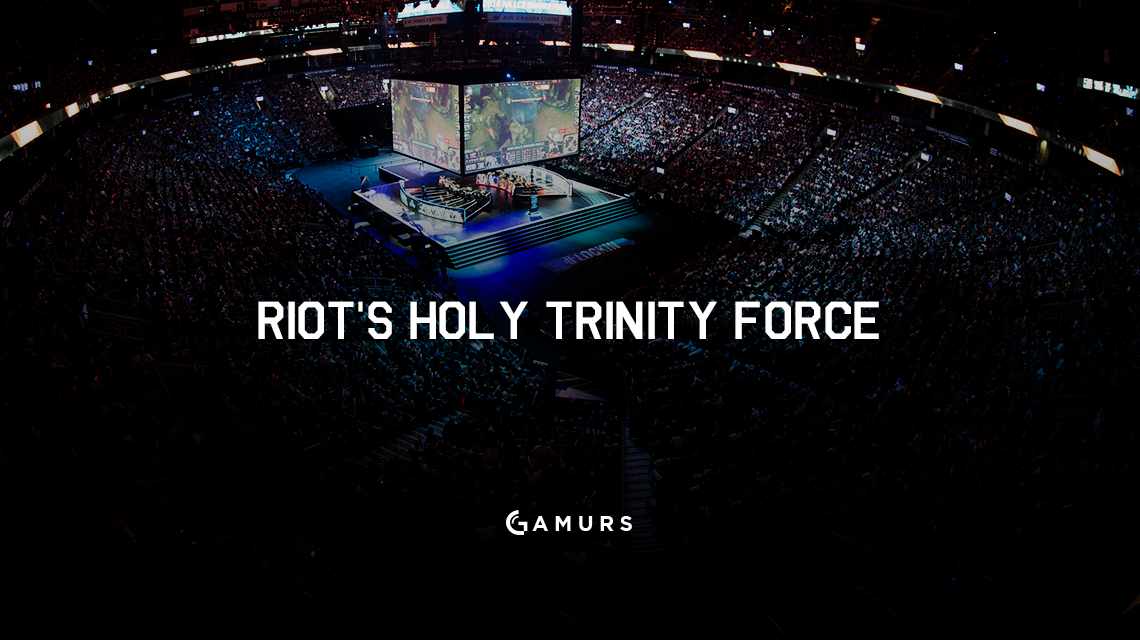 With all of the surprises Riot Games has given us over the past month, such as the comments from Marc Merrill and the “world group draws,” Riot has surprised us yet again by producing an article covering the future of League of Legends. The article covers a three step path that is at the core of the esports success of LoL. It discusses a lot of interesting changes that should positively impact the growth of the esport by affecting all of the parties involved, such as pro players, fans, partners, and many others. Here, I take a look at these major changes, as well as attempting to shed some light on those aforementioned planned changes.

After a traditional Riot Games introduction, the article discusses the three step path that drives the LoL esports scene to greater heights. These steps are: Fandom, Economics and Stability. To the reader, Riot seems to strike a positive vibe, mainly because they hit the core foundations of the different LoL leagues (LCK, NA LCS, etc). Without bringing these to the table, it would give a false representation of Riot’s understanding of their esports scene.

It’s true, “The fandom that we’ve always believed in is about much more than the number of viewers,” explained Riot. It’s how far spectators and enthusiasts of a competitive nature take their love and passion for the game. Whether it’s on social media, at a viewing party or attending the live matches, fans want to spend a great amount of time supporting their favourite teams, players and leagues. They’re the hamsters that spin the wheel, powering the scene to success as they’re constantly sharing factual and opinionated commentary on all aspects of the scene.

“We hope to give LoL esports fans the chance to share every experience with their community,” Riot said. These shared experiences are crucial to Riot as they gain free marketing that has the potential to recruit new fans. New and novice fans alike are intrigued by a different twist on player competitiveness, whereas hard-core fans have a variety of media channels from which to grow a bigger connection with players, teams and other enthusiasts.

This is just an assumption, but perhaps Riot wants to recycle their shared experiences to offer more to their fans. Whether this comes in the form of a new twist on spectator mode or better tools to share in-game highlights, it’s exciting to explore the possibilities. However, without any confirmation from Riot, we’re just left with the false hope that Riot can explore more creative sharing experiences, rather than offer more hashtags.

This is a core reason as to whether the scene flops or flourishes, and is the constant growth for both the scene and the esports industry. A successful esports title needs a healthy and sustainable economy, and this has been quite a dramatic topic when it comes to the LoL esports scene. With poor interpretations partnered with little discussion of future possibilities, it’s been an ever-present element in the argument between Riot and team organisations.

Yet with this article, they have not attempted to throw a positive speech over this topic. Instead, Riot has made changes that offer additional revenue streams for players and teams. “We need to grow the pie so that there’s more for teams and pros,” is how Riot so endearingly put it.

Without diving into unannounced media or sponsorships, Riot has shown a clear understanding of the impact of merchandising and in-game content. If spectators want to secure a momento for their favourite events, players or teams, they’ll gladly accept and purchase the relevant products.

But what about the other side of coin? That being, of course, the players and teams. With merchandise, Riot has announced that they want “to work with teams more closely to help them amplify their efforts to get cool stuff to those who want it.” Although this will strengthen the relationship between Riot and teams, it’s a shame they didn’t mention details on the actual merchandise in development.

Nevertheless, there’s also the importance of in-game content. Interesting in-game content is impactful for fans as it gives them a closer connection to the game. As player icons don’t provide that very effectively, Riot has announced new revenue streams that will impact the scene. For example, the “Championship Ward” and champion skins will directly increase the prize pools of Worlds, including this year’s Worlds, by 25 percent of the revenue being added to the overall pot.

Similarly, 25 percent of the revenue generated from challenger skins will be added to the MSI prize pool. This brings a new meaning to competitiveness, since more blood, or virtual blood at least, will be spilled as teams attempt to gain entry to the larger events.

In defense of this, Riot stated that “even without counting the retroactive payments to past champions, this will contribute millions of dollars in additional revenue to teams and pros each year.” Although this will make teams work harder to gain entry to the larger events, the next revenue stream creates a foreboding shadow over the future of LoL esports.

Revenue streams of team championship skins are being shared with past, present and future players, teams and leagues. Yes, it’s finally Riot taking the first baby step on improving its economy, but this decision establishes a greater hierarchy between teams and players. Let’s imagine this change was directly in effect today. This would mean that the previous winners (Fnatic, TPA, SKT, Samsung White and SKT again) could dictate the different leagues just by utilising smart investments, such as additional support staff. This also would mean an amount of pressure would be added to the pro players, to drive them to perform well and outshine others just to remain in the competition.

This grim hypothetical future portrays itself as quite dramatic, but at the very least, the performance of players would dictate the game, instead of creating the opportunity to allow larger team brands to buy all the best players into one squad. It’s an opinionated statement and only time will show the results of this specific change in action.

Riot has mentioned new and improved digital goods, such as team-branded in-game items, esports promotions, a larger revenue share on Worlds icons, and a guaranteed minimum revenue amount, where a clean cut 50 percent, per team, will go to players as supplemental income added to their existing salaries. The possibilities are endless as potential ideas of pro player in-game skins and other in-game content would make the term “excited” somewhat of an understatement.

They have the potential to bring a wealth of tantalising products into the light of day, which would allow team owners and players to earn revenue streams, while simultaneously offering more to the fans. With future content already in development, it’s also important to monitor the stability of the current LoL esports scene, as we know that one of Riot’s desires is to keep LoL going for at least another decade. As Riot said themselves, “As we face additional challenges and future unknowns, we’ll continue to stick to our core beliefs; to put esports fans first, to build a great ecosystem that keeps the sport you love around for the long-term, and which fans, pros and teams all aspire to.”

It’s great to have a cup overflowing with wine, but if there’s been a hole drilled into the bottom, the quantity is irrelevant. Riot hasn’t confirmed any details with new long-term partnerships, but they understand it’s crucial for a stable economy across the globe.

According to their spokespeople, Riot will be looking into future partners and other opportunities in 2018. They can’t demand for any partners to come straight out of the blue, seeing as it’s a complicated task to secure strong partners in all of the current league regions, all of which would make a positive impact on LoL esports. It is time, however, for Riot’s opportunism to be placed in the correct areas where it benefits all of the parties involved with League of Legends.

“Nailing fandom and strong economics is important for a thriving sport – but stability, with partnered organizations and the right structure, helps create a healthier environment in which our sport can grow and evolve over the longer term.” To whichever partners or organisations Riot has open conversations with, about the future of LoL esports, they need to take into consideration pro players and team organisations as they drive esports stability.

Without the positive rivalry, longtime fan bases of veteran players and well known team brands, the stability of League of Legends will decrease significantly. It will be difficult to find the perfect match, but it’s crucial for the LoL esports scene and with Riot’s success and strong positivity, there should be quite a few offers.

With Worlds just around the corner, it’s time to get revved up, and with the surprise of the future of League’s esports scene being released in a non-coincident manner, it’s a crucial turn of events for Riot Games. Time will only reveal what Riot has in-store for everyone as it’s quite clear these three steps are Riot’s explanation to give a strong insight for the esport enthusiasts and participants.

It seems partial opportunities have been presented and although these won’t fix the bigger problems anytime soon, Riot has left the impression that they are on the right path to a bright future. As long as they take all of the parties into consideration and truly understand who drives the success, they can have a strong fandom with a stable ecosystem for competitors.

Is Riot’s Trinity Force going to help progress the future of League of Legends? Let us know by commenting below or tweeting us @GAMURScom.