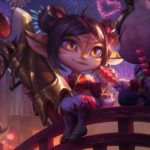 Every year, Riot Games releases new League of Legends skins for the Lunar New Year, which is celebrated in many cultures around the globe. And for 2022, League players are getting five new skins to honor the occasion: Firecracker Diana, Tristana, Sett, Xin Zhao, and Teemo.

Many Lunar Revel skins have been permanently added to League’s shop, but others, like Warring Kingdoms Tryndamere and Coin Emperor Tahm Kench, are Legacy skins. Legacy skins are not always available in the store but can be usually found in Hextech chests or through Mystery Gifting. But previous Lunar Revel skins, which are linked to a specific festivity of the year, might come back to celebrate the Lunar New Year.

The Firecracker skins are expected to land on the Rift around Feb. 1, the Lunar New Year’s Eve of 2022.