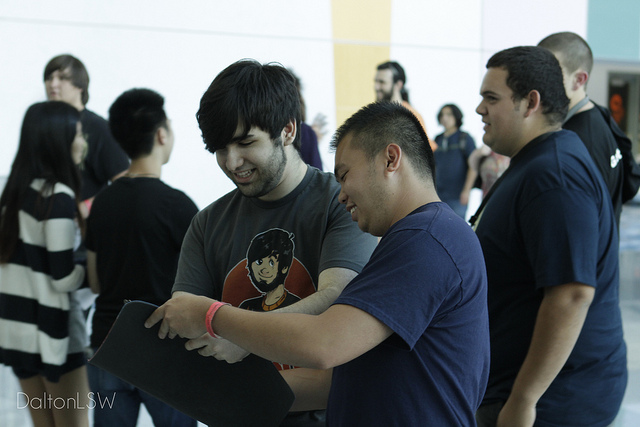 While greats like Faker or WeiXiao wrote the textbook approach on how to play their roles, other players were able to find success with their own unique, sometimes downright bizarre, approaches. The “Remember my Name” series analyzes their oft-misunderstood gameplay and what they brought to their teams.

Last week’s installment covered Moscow 5 AD Carry Genja, a player whose intelligence was obvious in his gameplay. From his measured approach to teamfighting to his unique, and sometimes clairvoyant, build paths, even his harshest critic was forced to concede the Russian mastermind’s obvious genius. On the other hand, a surface glance at Voyboy’s game shows very little nuance. His love for powerful assassins and risky play seems the very opposite of Genja’s measured style, to the point that Thorin once contrasted the two approaches in his Grilled interview with the former Curse solo laner.

In spite of his seemingly haphazard approach, Voyboy’s intelligence is obvious. As one of the first streamers to thoroughly teach the game to his viewers, Voyboy has given an in-depth explanation of lane match-ups, runes/mastery setups, and the strengths of his (oftentimes off-meta) champion selections before each and every streamed solo queue game for years. His academic achievements, somewhat unique among a group that have usually eschewed school to chase their gaming dreams, take up much of his Leaguepedia page. It seems impossible for such an intelligent man to completely neglect his intellect in favor of sheer mechanical skill, and a second glance reveals the truth. While he saw both exhilarating highs and crushing lows throughout his storied career, Voyboy, at his best, was a riveting mixture of genius and fire.

“I saw it on Voyboy’s stream”

One of the first things that comes to mind when discussing Voyboy is his creativity. Certain players, like Gambit’s Diamondprox, become famous for innovating champions that transform the meta. After Diamond begins playing a champion, like Evelynn, Gragas, or Sejuani, other players around the world soon begin to copy him. While Voyboy was a great innovator, his innovations were much more personal. When Voyboy played his personal power picks, like Katarina or Akali, those champions looked completely game-breaking – it seemed unfair that a champion could both do so much damage while remaining so tanky. But when other players attempted to imitate the assassin virtuoso, their attempts would fall short. One of Voyboy’s greatest strengths was his ability to access his surroundings and quickly discern the champions that would both suit his playstyle and fit into the metagame. (It’s no mistake that all of Voyboy’s signature champions are high damage picks.) Subsequently, Voyboy could then play those champions to a level that none could match due to his fantastic mechanics, ability to calculate all-in situations, and innate understanding of 1v1 match-ups. While it would be inaccurate to suggest that Voyboy only won games because of his ability to discover powerful champions, this trait has proved crucial throughout the course of his career.

Critics will quickly point out that Voyboy’s creativity occasionally lead to his downfall. Indeed, it sometimes seemed like he would stubbornly pick champions that he was convinced were powerful but were either too far away from the current metagame. Most notably, his mid lane Akali during his stint as Curse’s mid laner, ostensibly picked as a counter to Yasuo, never took off and ultimately played a part in Curse’s disappointing reverse sweeping at the hands of LMQ. At other times, his champions didn’t fit into the team context. While he was able to put up strong individual performances on Diana during his time on CLG, the champion wasn’t what the team needed. Indeed, his overall weakness on tanks and reliance on finding new champions to counteract them rather than playing the power pick tanks himself played a large part in his Curse team’s decline in Season 3 and his eventual move to the mid lane. But while his critics may gravitate to these moments, Voyboy’s creativity was overall a very unique strength.

Many of Voyboy’s finest moments came when he entered games with this massive technological advantage. While Voyboy has put up fantastic performances on meta champions that he made his own (such as Olaf in S2, Renekton in S3, and Yasuo in S4) his creative picks came with the added advantage of confusing his opponents. Many times, it was clear that Voyboy was perhaps the only player in the world who knew the match-ups he was playing in. In one of his very first tournaments, IEM Hannover, Voyboy would dominate sOAZ, a top lane genius in his own right, with his Lee Sin and propel his team to the finals against Moscow 5. It was here, in one of his very first games, that we can see a  prominent examples of Voyboy’s unique genius. Top lane Lee Sin was indeed a secretly very powerful pick at the time, but few could access his full potential because they didn’t have Voyboy’s dominant mechanical skill.

It was partially because of this unique attribute that Voyboy only emerged as a strong mid laner near the end of his stint on Curse. Voyboy initially struggled to both successfully play meta champions and to find unique pocket picks – his initial experiments with Akali and Vladimir led to mixed results at best. After gaining a better understanding of the mid lane role, he was able to put up star performances on high-damage playmakers like Syndra or Yasuo while also bringing in his own successful innovations, notably mid lane AD Carries like Tristana or Corki (which was only played in scrimmages, but drew bans throughout the playoffs.) It’s likely that with another season on Team Liquid, Voyboy could have come into his own as a mid lane star after achieving a better understanding of his position.

The other key attribute of Voyboy’s game that distinguished him from every other player was his unique approach to risk assessment. When looking at other great players, particularly in the top lane, there emerge two common schools of thought. Most star top laners prefer to accumulate small advantages to eventually snowball to victory, Azubu Blaze star Flame was famous for taking this approach to gradually achieve CS leads of over 100. Other players generally play to minimize risk and make their presence best known in the teamfighting phase, a trait TSM top laner Dyrus is famous for. When compared to these styles, Voyboy’s play seems bizarre. The North American top laner would repeatedly risk all of his advantages in the hopes of snowballing so hard that he could singlehandedly carry the game. It is a common adage that a single kill is especially meaningful in the top lane because of their scarcity. To Voyboy, a single kill was simply another chip he could throw down in a series of long double-or-nothing bets.

Such a risky style naturally comes with it’s downsides, and when Voyboy played without jungle assistance, his play would falter because he had a low chance of coming back after losing his leads. His best times as a top laner always came when playing alongside strong dueling junglers like Saintvicious or IWillDominate, who could either come in and help Voyboy turn the tables on a 2v2 trade or become a separate bruiser carry in their own right if Voyboy’s aggressive playstyle failed and he fell too far behind. At other times, it would seem like Voyboy was so determined to carry that he would repeatedly take poor risks and give up large advantages to his opponents when he simply had to sit back and let his co-stars (such as Doublelift on CLG or Saintvicious on Curse) carry the games on their own. When teams began moving towards supertanks and taking Teleport instead of Ignite, Voyboys play predictably declined since his all-in risk style was no longer as effective.

But before this decline, Voyboy was not only an explosive player, but a player who could take even the smallest of advantages and turn it into a game win. Voyboy was one of the first players to understand how to freeze minion waves, and he could use this to his advantage and accumulate large CS leads over his opponents. In particular, his usual champion pool of extremely bursty picks would complement this technique. Against the typical top laner, mispositioning may result in a forced back and a large CS deficit, but against Voyboy he would take both the CS lead and 300 gold from yet another kill. One of the most memorable innovations of Voyboy’s career was when his old Dignitas and CLG junglers would forfeit one of their first buffs to Voyboy, granting him a large experience advantage and an early Level 2. His ability to simply plow through his lane opponent with this advantage before players fully understood how large the gap between Levels 1 and 2 was would play a key part in defining his time on those teams. But it wasn’t only in situations like this that Voyboy could gain large advantages. In an interview, Voyboy once noted that he would take all-in fights against opponents who had just last hit a creep, because he knew he would be up an auto-attack in the battle. At times, Voyboy’s aggressive play seemed like compulsive gambling, but he knew that even an advantage as small as a single auto-attack could become a chance to power his team to victory.

At his very best, Voyboy was a player who could hard carry the game from a position typically considered supportive. His approach extended from his one-of-a-kind champion pool to his equally unique philosophy on risk assessment. He may have retired, but Voyboy will always be the master of assassins and a true carry top laner.