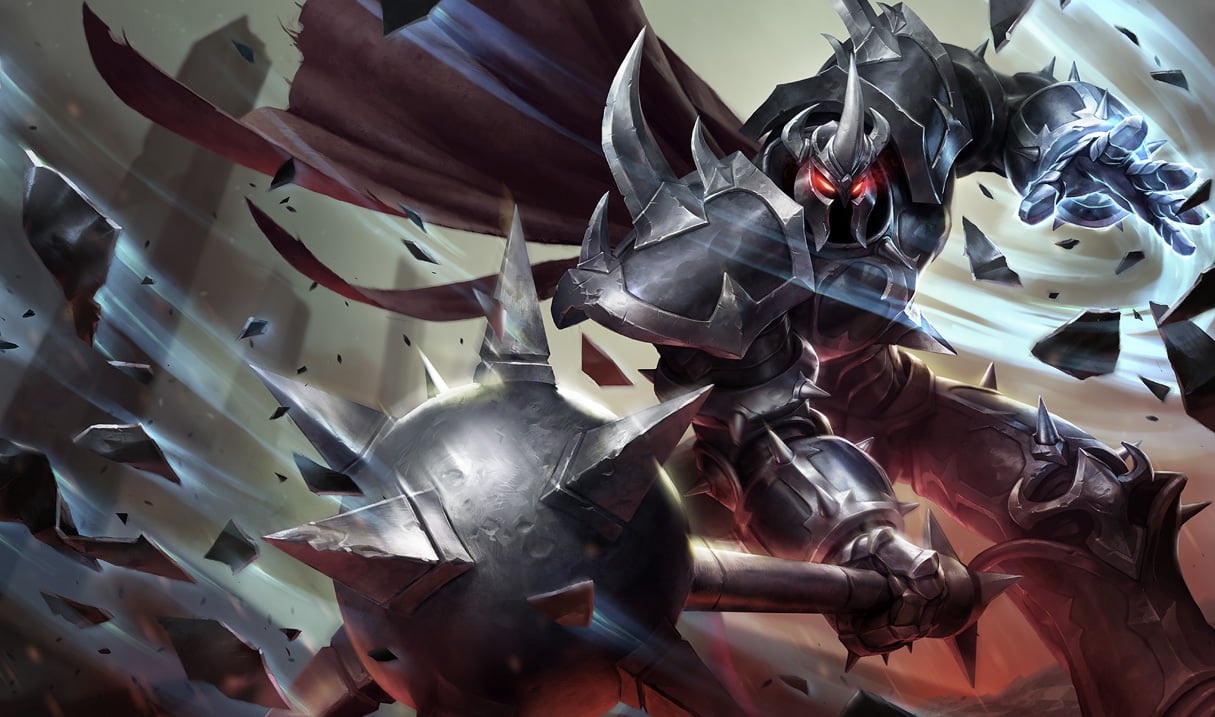 In honor of the upcoming re-release of Sion, I present the first in a series of articles focused on some of the oldest, most neglected Champions in the League, and how they might be returned to viability. First up is Mordekaiser, the Master of Metal.

I chose to start with Mordekaiser because he is simultaneously one of the most straight forward Champions in the game, and one of the hardest to balance. I’ve assembled a list of the primary factors contributing to this difficulty.

1. Way back in December 2011, Riot changed a few numbers in Mordekaiser’s kit in an attempt to reduce his excessive bullying potential (this was prior to the League of gap closers). They reduced the percentage shield Mordekaiser receives from Minions by half, and removed the bonus shield for hitting multiple targets from his E, Siphon of Destruction. In exchange, they increased the shield generation percentage on his passive from thirty to thirty-five percent. While the latter seems irrelevent compared to the massive nerf to Mordekaiser’s shield generation in the laning phase, it amounted to a buff to Mordekaiser’s survivability in team fights, and one vs one duels. This further incentivised Mordekaiser players to go full AP, rather than the intended AP Bruiser, as ability power=durability. Which leads to the following.

2. An excessive amount of Mordekaiser’s power is buried within his ultimate. Mordekaiser’s ultimate was originally designed as a tank killer, aligning perfectly with his intended position on the front lines. Most Champions that occupy this role have ultimates that provide some level of Utility, or secondary effect, and typically have good base damage and bad scaling. Think Rumble, Amumu Galio and Cho. The problem is, since the above number rebalance pushed Mordekaiser into a Mage role, the surprisingly high scaling on his ultimate, combined with the potential of creating a 6v4 advantage means a disproportionaly high amount of power is centered on this single spell. It’s not unusual for a three item Mordekaiser to be dealing 50% with Children of the Grave which, when combined with DFG, essentially turns this AP Bruiser into a tankier Veigar.

3. The free Resistances on Creeping Death are extremely efficient on a Champion whose effective health is extremely deceptive. This tacts on more hidden Power to a Champion that appears to be designed with hidden power in mind. His Shield constantly regenerates with damage, making it hard for the opponent to judge just how much health they have to take to kill him, and creating situations where Mordekaiser can bait the enemy into engaging battles they have no hopes of winning.

4. The execution of his spells is out-dated, and clunky. Mace of Spades could use a few quality of life changes, making it easier for the player to predict where the damage is going to bounce to, along with an isolation indicator. Creeping Death’s hit box is wonky, frequently creating situations where the spell casts on the wrong target, and likely needs champion prioritization. Lastly, if you pay close enough attention, the range on Siphon of Destruction has long seemed longer than it actually appears, and occasionally fails to cast thanks to another QOL change Riot made that prevent players from pre-casting his E before arriving at the point the spell intends to cast from.

It’s been almost three years since Riot has made any changes to Mordekaiser’s Kit, and the game has evolved around him. While constantly hovering between 48% and 52% thanks to a relatively small but devoted subset of players, Mordekaiser’s viability has been on a consistent downward trend over the past two years as the overall mobility of the game increases around him. The increased mobility is problematic as Mordekaiser is the only Champion in that game without either C.C. or a gap closer, and while I wouldn’t say he needs one, something needs to be done to alleviate these problems. It doesn’t help that every viable Jungler in the current Meta (and the Jungler Meta has been surprisingly stagnant since the Summer of 2013) has some kind of gap closer, from Elise’s repel, to Lee Sin’s ward jump, and Kha’zix’s leap. Only Lee Sin was out at the time of Mordekaiser’s last changes, with the rest of the current Meta’s junglers released over the course of 2012 as gap closers exploded onto the scene. To put some perspective on things, 14 of the 20 Champions released in 2012 had some form of Gap Closer, and 17 out of 25 in 2011. Out of the first 40 Champions released, only 16 had some kind of a gap closer.

Summary of the Problems

1. Complete lack of Mobility/Crowd Control. A selling point for many Mordekaiser Players who love to say “Death is the best C.C.”.

5. Poor Cohesion between Champion Design and Kit (I have a Mace and a Suit of Amor but I barely use them. Think Sion’s “I have an Axe but deal burst Magic Damage”, but to a lesser degree.

Crafting an adequate solution for Mordekaiser will highly depend on what Role the design team forsees for him, and how closely they can replicate his previous play style without running into the same problems. While there is no perfect solution, I think there are a few changes Riot could make in order to put Mordekaiser in a better place. And in my opinion, that place should be in the top lane, occupying a similar role to Rumble. To do that, he’s going to need some reworked numbers and a few other changes.

1. Chop off a significant portion of the scaling on Mordekaiser’s ultimate. This would allow the design team to move some of that excessive power into his other spells. Like Rumble, the ideal Mordekaiser build would prioritize Magic Penetration over AP in order to scale his damage.

2. Adjust the health costs of his Spells. Health Regen held a significantly greater role in Champion Itemization back in the heyday of Force of Nature and Warmogs, With Force of Nature removed from the game, Health Regen drastically reduced, and Warmog’s being heavily out of favor, Riot could afford to reduce some of Mordekaiser’s health costs. Personally, I love Mordekaiser’s hard-push playstyle. It would be interesting to see Riot introduce a mechanic that either increases his shield generation or health regeneration when he’s close to an enemy tower, introducing some interesting risk/reward scenarios.

3.  Adjust Passive to compensate for descreased health costs, and solidfy Mordekaiser’s role as a high-risk lane bully. This could be done by increasing the rate at which Mordekaiser’s shield decays, and restoring either the bonus Shield per target hit, or increasing the base generation %. This would encourage constant engagement with the enemy, and punish any failures to adequately leverage Mordekaiser’s bullying potentialinto advantages. This gives the opponent additional opportunities for counter-play, while also providing Mordekaiser with a definitive role and play style.

4. Change the Scaling on Mace of Spades, and add an isolation indicator. The AD scaling on Mace of Spades is a noob trap at this point, tricking players into dumping an unnecessarily high, and extremely inefficient amount of gold into the likes of Hextech Gunblade. The large majority of Mordekaiser’s damage scales with AP. Having 1800 gold allocated to two stats you don’t use (AD and lifesteal) is a massive waste. Fixing the isolation on his Q would also create more rewarding scenarios for Mordekaiser players that leave the safety of the minion wave.

5. Improve player interactions with Children of the Grave. Right now, Mordekaiser’s Ghost will not attack a target unless you right click on one, creating frustrating situations in a battle where the clone will stop moving in the middle of no where, and fall too far behind to be useful. Ideally, Mordekaiser’s ghost would perform like a directable minion, automatically attacking the closest enemy, and prioritizing nearby enemy Champions when not being actively controlled by the player.

6. Create more opportunities for mechanical outplays. Mordekaiser’s ability to outplay largely resides within the deceptiveness of his effective health thanks to his shield. Other than that, his lack of mobility and binary attacking pattern creates few chances for a Mordekaiser player to show his skill outside flash DFG combos on a squishy target. Such changes could be centered around a reworked Creeping Death that would be focused on rewarding Mordekaiser for being in close proximety to enemy champions (that scales with the number of Champions). This could be done by moving the Resistance steroid into a passive, and turning the activated spell into something that more accurately depicts “creeping death”. In the active, enemy Champions that stay too close to Mordekaiser for a specific period of time (e.g. Effect lasts 8 seconds, any Champion that stays within XXX units of Mordekaiser for 3 seconds), get hit with a status effect. This could be either a fear, a silence, or a slow. All would work for a spell that’s supposed to mimic the feeling of death creeping over somebody. Passive would be disabled while spell is on cool down. This reworked spell would give Mordekaiser some interesting possibilites in team fights, while forcing enemy Champions to think carefully before they engage with him. Would also provide Mordekaiser with some protection when he’s sitting up in lane, increasing his chances of escaping if he’s able to hold out long enough for the added effect to kick in.

While some of these changes are more drastic than others, and would likely require significant testing, I think they would produce a much more cohesive Champion. The changes would allow Riot to preserve the playstyle that attracted so many players to the Champion in the first place, creating more opportunities for meaningul decisions, and windows of opportunity for either side to exploit. It’s also possible that Riot forsees an entirely different role for the Master of Metal, and that none of these changes would work in their desired framework.

Give me your thoughts on how you think Mordekaiser can be improved, and look out for the next article in the series focusing on Galio, the Sentinel’s Sorrow.