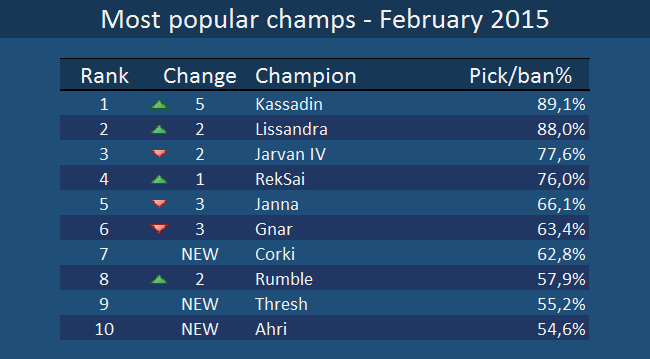 With the first international tournament on the horizon, this could be an useful article about the picks and trends of the most competitive regions. Along these tables and graphs you will discover the main differences between the EU LCS, NA LCS, LCK and the LPL. This entry doesn’t pretend to analyze the different trends, it’s just informative.

First of all let’s see which champs are the most popular of the month and which one went up or down in the monthly ranking.

Now these are the picks and bans tables of the 40 games of each LCS, 31 of LCK, and 72 of LPL. The last table collects data from the 183 games played in February.

Korea against the world

It’s hard to valuate the most powerful picks when the LPL has 72 games and the LCK 31. This is a power ranking based on points given to each stat and multipliers for each league depending on how strong it is.

Then add bonus points to the first champs of every role and flexpicks.

And these are the multipliers.