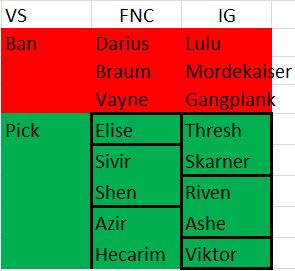 Worlds has begun!! I will be doing a series of post-game analysis write-ups for the matches at Worlds. With the sheer volume of games in a single day, I will do my best to write these as soon as possible. Please do not ask about games played after the one in the article as I’ll be behind from live games. I’m working on the formatting for posting these articles so any suggestions are much appreciated. I decided to break it down into pick/bans for each team, discussing the final comps and how they should be played (what are their win conditions), notable item build paths, and discussing major events at different parts of the game. I chose to do a bullet format so avoid lengthy paragraphs, but any feedback on preference is much appreciated. I also may have gone too far into detail discussing the events of early/mid/late game. I may choose to “trim the fat” in future articles. Thank you for your patience.

I don’t think IG drafted a cohesive comp. They didn’t need to take Skarner in the 1st round draft since Elise was 1st picked by FNC, so picking him early kind of gave away what IG was going for, leading into FNC taking Shen in the 2nd round. The meta definitely revolves around team-fighting comps, but now in the Juggernaut era, I think pick comps can be good too. Skarner himself wasn’t a bad pick, but he needs help. He has a weak early game so they couldn’t start snowballing until he hit level 6. This fits well for the comp having Ashe + Thresh to supplement it (Ashe + Skarner should hit 6 around the same time) using Ashe arrow for initiation leading into either a Thresh hook or Skarner ult. Having Ashe as initiation means Skarner doesn’t have to rely as much on a speed boost to land his ult. It’s a ton of single target lock down that could’ve worked really well. I’m not a fan of the match-up into Elise, but IG could’ve played safe until 6 to start snowballing. I’m more disappointed in the Riven pick. Riven was blind-picked without knowing the Top Lane match-up and won’t get much help from a Jungler pick like Skarner. IG should’ve picked a different bruiser (perhaps Fiora, safer against Elise ganks). Viktor mid was an OK pick providing the team with much needed wave clear to hold mid lane while Skarner power farms to 6. IG should’ve picked Viktor in the 2nd round and saved the last pick as a counter pick for Top Lane. FNC did well adjusting their picks as the draft went on. They picked Shen after seeing Skarner to help keep teammates alive, they picked Azir after seeing Skarner/Riven as IG’s front-line so his ult provides strong disengage, and Hecarim lanes decently against Riven and doesn’t get bullied as easily.

Overall a very well played game by Fnatic. They made great use of rotations to systematically take down enemy turrets working on taking all outer turrets, then all inner turrets with baron buff. Great drafting by Fnatic to counter what they were seeing from IG. Fnatic was able to make support Shen work which was great help against a pick comp although if IG chose standard lanes, it might’ve made Shen less effective since he’s weak in laning phase. Good in-game adjustments as well: Huni building Frozen Heart first was great because as long as the team didn’t lose early they would out scale, Febiven used Clease summoner spell to prevent picks, and both carries built 3rd item QSS even though they were ahead just to ensure IG couldn’t get back into the game. Great game by Fnatic for the start of Worlds.