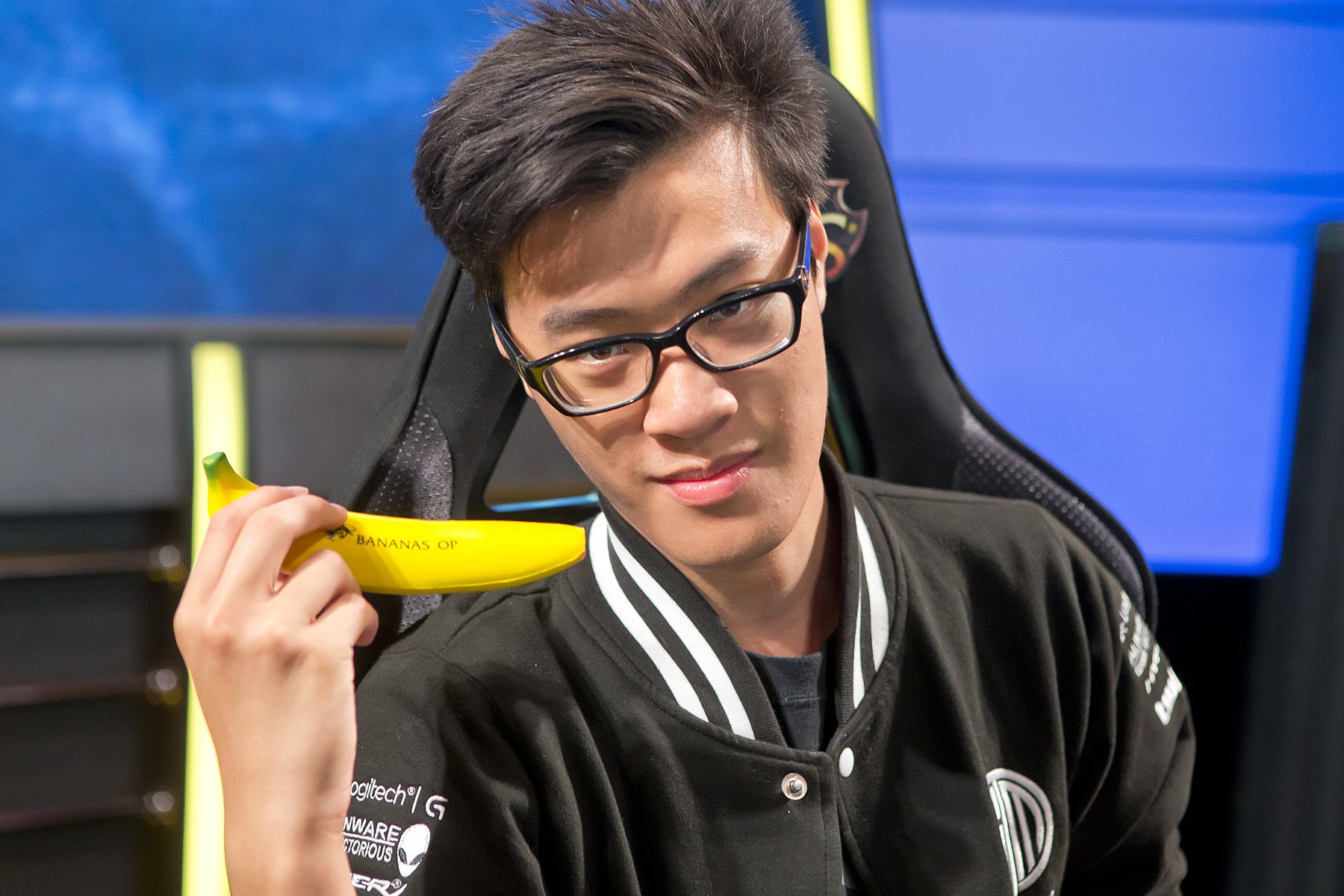 Fans rarely consider how patches can change a player’s career. Because LoL is a constantly changing game, players rarely improve or decline solely in a vacuum. Because of how dramatic patches can be, even relatively versatile players can suffer after a key aspect of their gameplay is nerfed. “Player Nerfs” is a series that discusses these history changing patches, particularly emphasizing players who adversely affected by these changes. With another comprehensive AD Carry item rework in front of us, let’s take a look at the previous big AD Carry change and how it affected various pro players.

Patch 4.10 was one of the most important patches in League of Legends history. After Season 2’s comprehensive nerf to AD Carry itemization, players had settled on a consistent build path for the last 2 years. Players would rush the AD-heavy Bloodthirster as soon as possible. Back then, Bloodthirster could stack up to 100 AD on minion kills and only cost 3200 gold, meaning that winning lane and getting “BT” (or, during various parts of the BT meta, Trinity Force or Blade of the Ruined King, the only two items which could exceed or match an early game Bloodthirster in dueling potential, and only then on specific champions) was the key to winning bot lane.

In addition, because Bloodthirster provided so much raw attack damage, spellcasting AD Carries were particularly powerful. Right after the Season 3 pre-season patch, when the “BT meta” was first introduced, some of the most powerful champions were those that could easily win lane and abuse an early Bloodthirster. Champions like Graves, Miss Fortune, and Caitlyn rose to prominence due to their powerful laning phases and strong AD ratios. As the meta continued to develop, other AD players began pioneering support champions such as Ashe (usually with an Infinity Edge due to only one AD ratio) and Varus.

One of the most important changes came mid-season when Blade of the Ruined King was reworked to give attack speed and lifesteal. Previously intended as a late game 5th/6th item, the new “BotRK” synergized perfectly with auto-attack heavy champions like Vayne and Twitch that needed to quickly land a lot of auto-attacks at once. The second major change came before Season 3 Worlds, when Trinity Force was massively buffed, bringing champions like Corki and Ezreal back into popularity. Later on, Lucian became another very prominent Trinity Force abuser once pros began playing him in Season 4. Two other big meta shifts came after the Sivir rework and the introduction of Jinx – both champions were powerful Bloodthirster abusers due to their large AD ratios and high carry potential.

All in all, the BT meta favored two very specific playstyles. Some players were backline supporters on champions like Varus, Miss Fortune, and Caitlyn. These players tried their best to keep their opponents down in lane while providing stable backline damage for the late game. These players, such as Puszu, were usually role players who supported the carry threat positions on their teams.

The other players played a bursty, even assassin-like style on champions like Twitch, Vayne, Corki, and Lucian. By building up early leads, these players could repeatedly crush their opponents in 1v1 duels to build big advantages for their teams. The most successful and iconic AD players of this era all largely played this aggressive style. Players such as Piglet, WildTurtle, UZI, and Tabzz all saw great success smashing lane and bursting down opponents to lead their teams to victory.

After two years of this meta, Riot attempted to change the meta in order to grant more late-game power to AD Carries. In conjunction with these changes, Riot also reworked Lucian into a 500-range mobility based character. The item changes led to an immediate shift in AD Carry popularity. Late-game oriented picks became extremely popular, with Tristana and Kog’Maw in particular rising to the fore. Eventually, players such as Royal’s UZI realized that Lucian was still very powerful in spite of his rework. During this time, Lucian was one of the only lane dominant picks, and he could only be used by players with particularly good positioning skills, due to his meager 500 range.

Ironically, some of the other most powerful champions were the ones unaffected by the AD changes – while Graves and Sivir saw their beloved Bloodthirster essentially removed from the game (the new Bloodthirster is a life-steal heavy item without any of it’s predecessor’s AD stacking) Vayne and Twitch saw their build paths unchanged. Due to repeated nerfs, neither character was capable of the same levels of burst as before, but remained viable assassin-type picks in the hands of the most skilled players, such as imp. Although less popular, Corki also remained in the meta with a build of Trinity Force into Sorcerer’s Shoes. However, his burst was tuned down due to the removal of Bloodthirster.

These changes saw a distinct re-prioritization in AD Carry skills. Previously, two of the most important skills were lane dominance and an ability to quickly calculate burst damage. With those two skills, players could win lane, keep their opponents down, and quickly burst down opponents en route to rotating to towers. After Patch 4.10, these skills remained useful in certain scenarios, but fell by the wayside.

Calculating burst damage and lane dominance weren’t nearly as important after Patch 4.10 due to the itemization and champion changes. Without the stackable BT, it was much harder to emphasize a lead over an opponent. Finishing BT first meant that a player could be up over 20 AD over their opponents before they finished their own item. Under the IE meta, finishing IE first wasn’t as important, and because of the item’s critical hit chance, calculated laning play occasionally simply went out the window.

Instead of calculating burst damage, positioning became particularly key – even champions previously suited to the split-push/burst AD meta grew to require positioning due to nerfs. Twitch, Lucian, and Vayne all remained viable picks post 4.10 but because of nerfs these champions could no longer immediately and safely burst down their opponents. A high amount of strategic play was required to access their formidable burst damage.

These skills were replaced by positioning and teamfighting. AD Carries were a lot more powerful in the late game, but they had much less impact until the late game actually came.

Around the world, a group of players simultaneously declined with the introduction of Patch 4.10. It would be ignorant to assume that all of these players got worse at the same time, especially because they filled such a similar player profile. Many of the players who declined after Patch 4.10 were play-making AD Carries with the aforementioned lane and damage calculation skills. Some of these players were inherently more versatile, and were able to recover by adapting their games to the new meta. Others fell into a long decline and have never been able to truly recover. Although many players were affected, here are some of the most notable players hurt by the 4.10 AD Carry changes.

The most obvious loser after Patch 4.10 is former TSM star WildTurtle. WildTurtle was one of the best AD Carries when it came to quick damage calculation. Although his laning phase never went much farther than above average, he was often able to swing big plays for his team by seizing on opportunities few other players saw. After the IE changes, these risky attempts consistently failed, and Turtle went from being one of the most respected AD Carries in the World to one of the weakest in his region.

Across the ocean, former SKT star Piglet suffered from similar problems. Piglet’s skills have always shone brightest in laning, skirmishing, and split pushing. Piglet had already begun declining after his support partner PoohManDu had been changed out for Casper. The 4.10 AD Carry changes were the final nail in the coffin – Piglet has never been the same player since. Although Piglet has seen some bright moments on TL when playing split pushing champions, he’s never looked nearly as comfortable in the new post 4.10 meta.

Another player who suffered after 4.10 was Alliance AD Carry Tabzz. Tabzz, a former mid-laner, had loved playing bursty AD champions, to the point that he usually built Bloodthirster first on Twitch rather than BotRK to increase his burst damage through Expunge. Although Tabzz remained a strong player after the changes, not falling off nearly as hard as WildTurtle or Piglet, his diminished early game impact robbed Alliance of a playmaker when they needed it most – outside of Twitch, Tabzz could no longer bring the same early game impact, and Alliance faced the consequences at the World Championships.

To a lesser extent, players such as Doublelift and imp were also hurt by the item changes. Doublelift had led CLG to a strong top-3 finish in the Spring Split, and his revamped CLG squad with Seraph were leading the league in first place before Patch 4.10 dropped. Afterwards, his individual early game impact was greatly diminished, and his team’s flaws became much more apparent. Doublelift would continue to struggle in Season 5 before finally settling into the Infinity Edge meta in the summer split, leading CLG to their first NA LCS title.

Similarly, imp saw his individual performance drop after the 4.10 changes, but unlike Doublelift, imp’s teammates were more than able to pick up the slack. One particularly important difference was that imp’s skillful teammates freed him up to pick Vayne and Twitch, two champions which were perma-banned for the majority of Season 4 against CLG after 4.10. On these assassin picks, imp continued the daring frontline play which had characterized his whole career, leading Samsung White to a World Championship alongside co-stars DanDy and Mata.

Oftentimes, comprehensive game shifts can nerf or buff pro players just like they effect in-game champions. One of the biggest changes to AD Carry itemization was the 4.10 patch, which dramatically shifted the AD Carry landscape. It’s important to recognize that players aren’t simply bad or fell-off, but rather the game shifted in a way that hurt their innate talents. The players who saw their greatest success pre-4.10 aren’t necessarily worse or even less versatile than the players who saw their greatest success after 4.10 – the players who succeeded in the teamfight AD meta may well have failed in the burst-dominated one. Rather, it’s important to note patches when it comes to evaluating players and their careers.