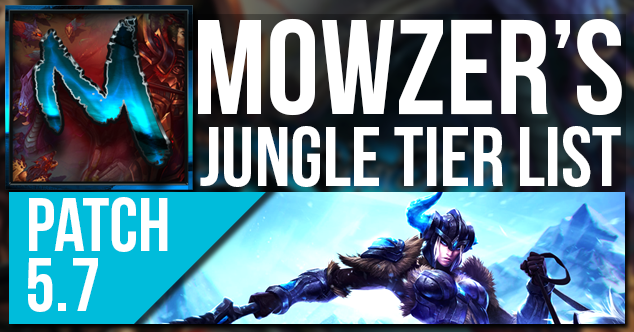 Hey everyone. Mowzer here. Diversity comes from people thinking outside the box and trying new things. This tier list is purely my opinion and is not being stated as fact.

Jungle Changes : My Jungle Notes – I’ve moved this section to its own article.

The list below has the champions listed from 1st to 10th. I feel that 1st is the strongest and 10th is the weakest, of those listed. This does not mean that any of these champions are weak or not viable. I would like to point out that there are far more than 10 viable/good champions. There are, in fact, over 20 junglers I feel are good. Attention! This is my opinion and lists only the top 10 champions. This is NOT a complete tier list of every champion that can jungle. My complete “climbing” tier list will be posted at a later date.

The big 10: note (5th to 1st) means that I ranked the champion on my list at 5th last time and now is placed 1st. Unlisted means they were not on the previous list.

Post any comments below or let me know what you think. Check out my champion cards andcomic series. I hope everyone is enjoying these tier lists. Thank you for all the support, feedback, and criticism. I greatly appreciate it! My social sites are Facebook, Twitch, Youtube, and Twitter. Special thanks goes to my girlfriend and Nunire for checking my work, input, and helping me with various design projects. You guys are amazing. Have a wonderful day and best of luck you in your games.

TL;DR – The hulk era still continues. The nerfs to cinderhulk weren’t game changing, more of a fine tuning. Be prepared for more Eve in games. Try to think outside of the box. Play what you feel you’ll do best with and not just what the pros play. Solo Q is not the LCS, LCK, LPK, etc. Have fun!